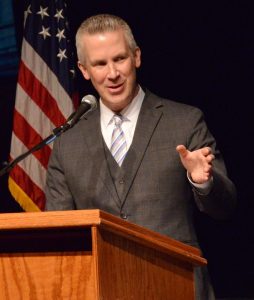 WHEELING — City officials in Wheeling are expected to adopt the next fiscal year’s operating budget in the coming weeks, and initial figures show a significant increase in revenues.

This week, Wheeling’s proposed general fund budget for fiscal year 2020-21 was posted on the city’s website. The proposal was submitted by City Manager Robert Herron to Mayor Glenn Elliott and members of city council on Friday for their review.

Anticipated general fund revenues and expenditures remain close to figures from the budget for the current fiscal year, which began in July 2019.

The proposed operating budget for the next fiscal year is balanced to the dollar between revenues and expenditures, with both totaling $35,782,330.

Figures for the current city operating budget for fiscal year 2019-20 were revised from the original budget to increase expenditures for the year from $35,143,353 to $36,432,558 for various projects and additional expenses, but those figures also included an increase in the city’s carryover/unassigned fund balance to more than $1.3 million.

“The city’s financial situation has improved over the past three years,” Herron noted in his submission to the mayor and council. “Spending levels in nearly every non-employee related area have either remained the same or reduced to insure that we do our part in a competitive environment. We will also closely monitor expenditures to insure that, although budgeted, each expenditure is necessary and is in the best interest of delivering municipal services to our community.”

Herron noted that generally speaking, the municipal services that have been provided to the citizens of Wheeling will remain the same.

“As is the case with sound budgeting philosophy, this budget is based on conservative revenue projections versus reasonable expectations for expenditures, although again this year we have focused on as accurate revenue projects as possible,” Herron noted.

Comparing originally budgeted revenue figures for this fiscal year to projected revenues for next year’s city operating budget, an increase of nearly $840,000 is anticipated.

“This year’s proposed budget for the 16th year maintains a Budget Stabilization Fund at $1.8 million,” the city manager told council. “It is important to note that we will continue to work hard to insure that the most efficient and effective services possible are being offered to the community and continually strive to improve our service delivery.”

The proposed fiscal year 2020-21 general fund budget, the Coal Severance Budget and budgets from all of the city’s department heads were all submitted to city leaders over the past week for their review. According to the city’s budget schedule, council is scheduled to consider adopting the 2020-21 fiscal year budget during its regular meeting on March 17.

“The city of Wheeling, from a budget standpoint, finds itself in the similar situation to many cities throughout the country in that we’ve been able to keep our nose above water financially,” the city manager wrote. “Some cities unfortunately can’t make that same claim. As a result, we are in a position to logically look at our budgeted and future needs and direction of our organization.”

During last week’s city council meeting, Herron submitted an updated 2020-21 budget schedule for planning sessions pertaining to the next fiscal year’s budget. The revised schedule includes a work session, if needed, at 11 a.m. on Tuesday. Along with anticipated adoption of the proposed budget on March 17, the schedule also has city leaders holding year-end departmental reviews and proposed budget adjustments from June 25-29, with follow-up employee group meetings with the city manager.

“I’m happy to say that it is balanced,” Herron said of the anticipated revenues and expenditures for the next fiscal year. “I would like to thank the department heads and (Wheeling Finance Director) Seth McIntyre for their efforts in putting together this proposed budget.”

The city manager also reported to members of council last week that actual figures coming in for the first seven months of the current fiscal year are solid.

“Compared to the same period last year, we saw considerable increases in revenues from the city’s B&O tax collection, sales tax collection and building permit fees,” the mayor announced during his State of the City address this week. “So much so that those in attendance noted that Mr. Herron’s usually stoic countenance at such meetings almost gave way to a smile. Almost.”