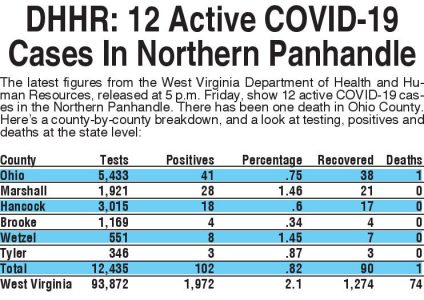 WHEELING — Medical experts in both Ohio and Marshall counties agree on one outcome of the ongoing COVID-19 pandemic — even while socially distancing, the entire process has been an exercise in banding together.

Ohio County Health Administrator Howard Gamble and Marshall County Threat Preparedness Director Mark Ackermann both said the biggest thing to come out of the pandemic has been the serious uptick in cooperation with other agencies, as the health departments worked hand-in-glove with schools, first responders and the West Virginia National Guard, the latter of which, Gamble said, filled crucial roles in providing trained people ready to assist.

“This has been quite a public health journey. I’ve dealt with a lot of other outbreaks,but this one is really different in how we’ve worked together to handle it. We’ve worked a whole lot closer with our other public health and health care partners. We all have a better understanding of what we need and what we need to do to get through this,” Gamble said.

“We used to be a little cautious — we’ll buy an item in case we need something. Now, it’s ‘We need more masks. Let’s find them, find them appropriately, but get them in here. Yes, we need someone in this position, let’s get them in here.’ One of the biggest benefits we had this entire outbreak has been the assistance of the National Guard. If we didn’t have them, we’d be doing a whole lot of hiring and training very quickly.”

Ackermann attested to a similarly close-knit situation in Marshall County.

“We’ve learned a lot about how we, as an agency within the county, can work better with our other county agencies,” Ackermann said. “We were working well with the county schools, the (Emergency Management Agency) and everything, but this has just stepped up our interactions between the different departments, in large part due to myself only having been here since November, and (Marshall County Health Administrator) Tom Cook only having been here since August.

“We were working with the schools on a lot of different things, and that relationship has just grown so much that it’s just been amazing.”

Gamble added that as the disease progressed, he saw more people coming to terms with how to protect themselves.

“With this disease, there’s a lot of ‘I’m concerned about my family, and I’ll do what I have to to prevent it from spreading,'” Gamble said.

However, he also saw the flip side, where people threw caution to the wind in demanding businesses open prematurely.

“Further down, we are seeing the other side, which is ‘I’m tired of being cooped up,’ ‘I want a haircut,’ ‘It’s time to open up.’ Some of that is selfishness, but some of it is understandable. The economy needs to get going again, people need to get back to work. But we need to do this in a safe way, in a way that we don’t increase the disease to the point where we’ll need to close down again.”

There have been 41 reported cases in Ohio County, including one death.

By using contact tracing, the process by which infected individuals are tracked to where they had been and who they may have been in contact with, local health department have been able to identify the path COVID-19 may have taken through communities.

“It gives us a lot of guidance as far as, who to recommend to go receive testing, and where to potentially look for hotspots — and knock on wood, thankfully, we haven’t had any,” Ackermann said.

Gamble said that contact tracing may allow the health department to offer more targeted enforcement on potential hotspots in the county, rather than a blanket closure of businesses.

“With a little more understanding of where the disease hits and how we can follow it, we may be able to limit or control places where infections occur. If we saw a whole bunch of (infected) people associated with a certain venue, maybe it’s just the venue, rather than the whole industry. We may be able to target just a little bit more.”

Gamble said he sympathized with the viewpoint of people no longer wanting to be cooped up in their homes and going out to socialize, but exercised caution for those doing so.

“We have to be careful. Rushing out in large groups is always a caution, no matter what, but in this day with a virus we don’t have things to treat or vaccinate against, you’ve got to be really careful going out in groups,” he said.

The second Monday in June

Ackermann doesn’t believe the Ohio Valley is out of the woods yet, and with the recent re-opening of restaurants and certain businesses over the last few weeks, Ackermann said Monday, June 8, is the date health officials are watching for the next spike as the disease completes its incubation period and symptoms manifest.

“It’s still active within the county — we have (four) cases within the last week, and our fear right now is that we’re setting the date of June 8 as a key date. That’s … a little after two weeks of the reopening. … Anybody who potentially, from the reopening, may get infected, it may take a week. But if we’re going to see a spike, it’s going to be somewhere in that neighborhood of June 8,” Ackermann said.

Ackermann said he believes the Ohio Valley is prepared to handle a second wave of COVID-19 cases, should one arise. As of Friday, 28 positive cases had been reported in Marshall County, according to teh West Virginia Department of Health and Human Resources, seven of which are in at-home isolation and 21 others who have recovered.

Where Ackermann sees room for improvement, though, is in communication with state officials. He said the health department regularly receives questions pertaining to businesses.

“… We participate in weekly meetings with all the local health departments across the state, and for weeks on end, there’s questions just sitting there in limbo, because no one will pick up the phone and answer. We hope to be able to push forward the point … that there needs to be better communication with the governor’s office in Charleston. We’ve never had a telephone conference with the governor’s office. They’re talking about having one, but we’ve never had one in this entire time, for us to really know what’s going on.”