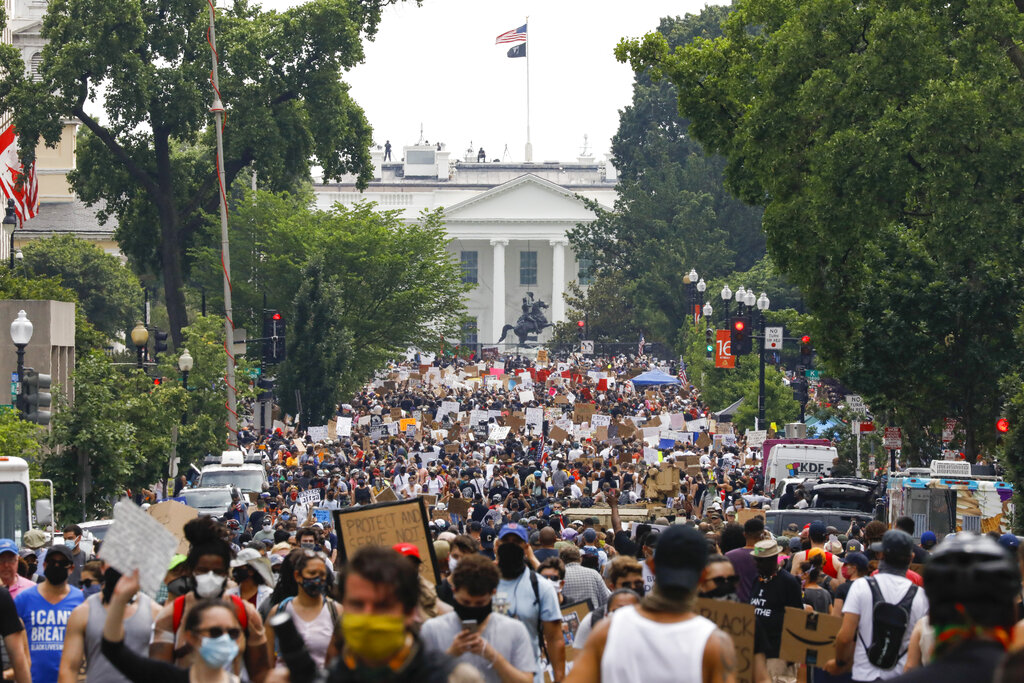 Demonstrators protest Saturday, June 6, 2020, near the White House in Washington, over the death of George Floyd, a black man who was in police custody in Minneapolis. Floyd died after being restrained by Minneapolis police officers. (AP Photo/Jacquelyn Martin)

WASHINGTON (AP) — Massive demonstrations against racism and police brutality filled some of the nation’s most famous cityscapes Saturday, with tens of thousands of people marching peacefully in scenes that were more often festive than tense.

Wearing masks and urging fundamental change, protesters gathered in dozens of places from coast to coast while mourners in North Carolina waited for hours to glimpse the golden coffin carrying the body of native son George Floyd, the black man whose death at the hands of Minneapolis police has galvanized the expanding movement.

Collectively, it was perhaps the largest one-day mobilization since Floyd died 12 days ago and came as many cities began lifting curfews that authorities imposed following initial spasms of arson, assaults and smash-and-grab raids on businesses. Authorities have softened restrictions as the number of arrests plummeted. 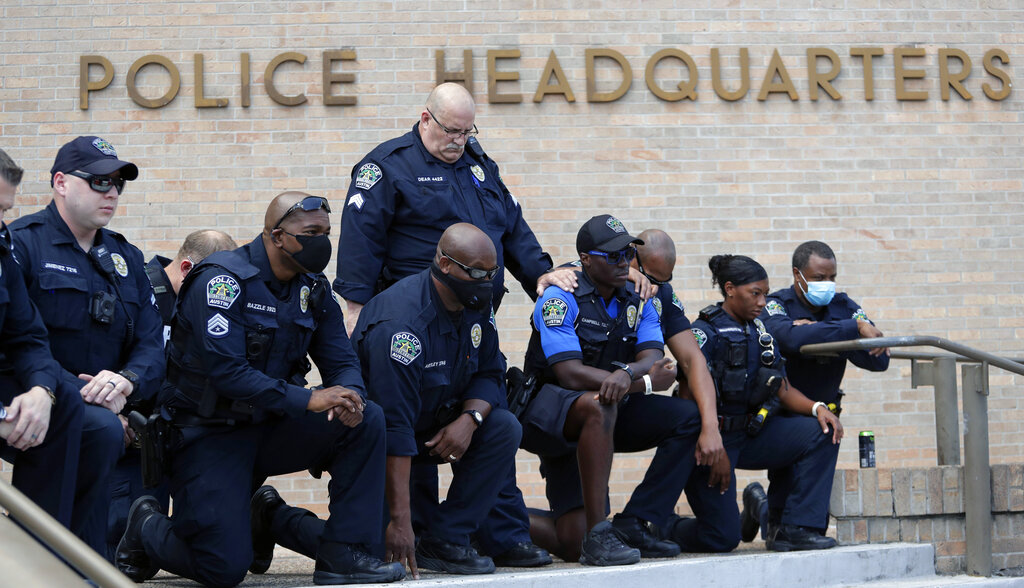 Members of the Austin Police Department kneel in front of demonstrators who gathered in Austin, Texas, Saturday, June 6, 2020, to protest the death of George Floyd, a black man who was in police custody in Minneapolis. Floyd died after being restrained by Minneapolis police officers on Memorial Day. (AP Photo/Eric Gay)

The largest U.S. demonstration appeared to be in Washington, where protesters flooded streets closed to traffic. On a hot, humid day, they gathered at the Capitol, on the National Mall and in neighborhoods. Some turned intersections into dance floors. Tents offered snacks and water.

“The laws are protecting them,” said the 37-year-old African American teacher. The changes she wants include a federal ban on police chokeholds and a requirement that officers wear body cameras.

At the White House, which was fortified with new fencing and extra security measures, chants and cheers could be heard in waves. President Donald Trump, who has urged authorities to crack down on unrest, downplayed the demonstration, tweeting: “Much smaller crowd in D.C. than anticipated.”

Elsewhere, the backdrops included some of the nation’s most famous landmarks. Peaceful marchers filed across the Golden Gate Bridge in San Francisco and the Brooklyn Bridge in New York, where officers pulled back on enforcing a curfew that has led to confrontations. They walked the boulevards of Hollywood and a Nashville, Tennessee, street famous for country music-themed bars and restaurants. 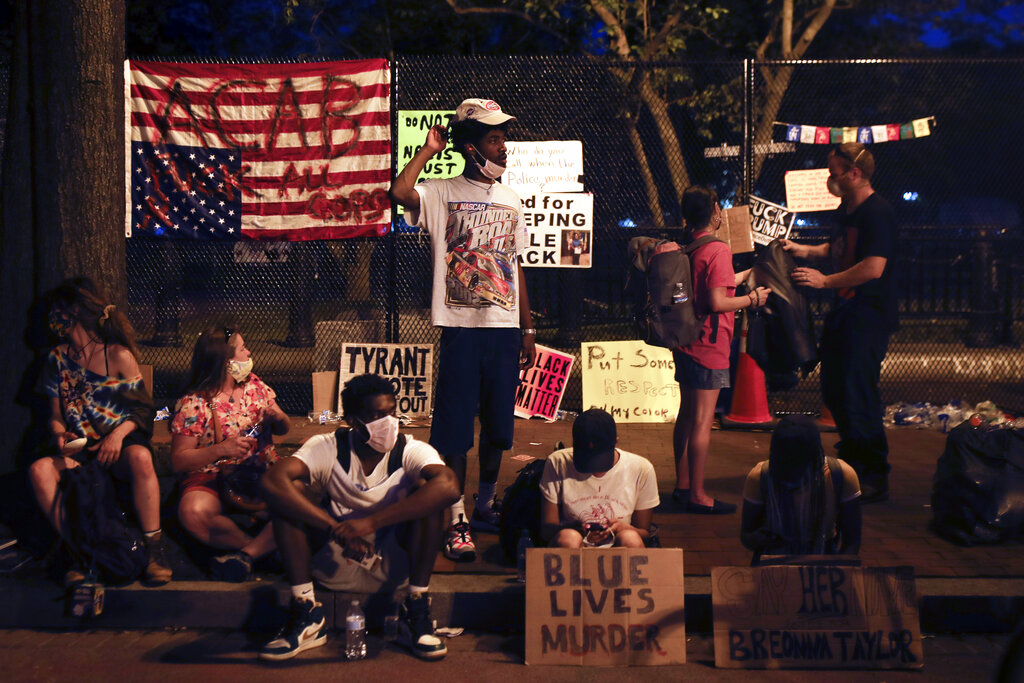 Demonstrators protest Saturday, June 6, 2020, near the White House in Washington, over the death of George Floyd, a black man who was in police custody in Minneapolis. Floyd died after being restrained by Minneapolis police officers on Memorial Day. (AP Photo/Maya Alleruzzo)

They also gathered in places as far flung as a St. Louis suburb and cities in the Deep South.

Many wore masks — a reminder of the danger that the protests could exacerbate the spread of the coronavirus.

Roderick Sweeney, who is black, said he was overwhelmed to see the large turnout of white protesters waving signs that said “Black Lives Matter” in San Francisco.

“We’ve had discussions in our family and among friends that nothing is going to change until our white brothers and sisters voice their opinion,” said Sweeney, 49. The large turnout of white protesters “is sending a powerful message.”

In Philadelphia and Chicago, marchers chanted, carried signs and occasionally knelt in silence. At a massive showing near the Philadelphia Museum of Art and its famous “Rocky” steps, protesters chanted “No justice, no peace!” before heading for City Hall. 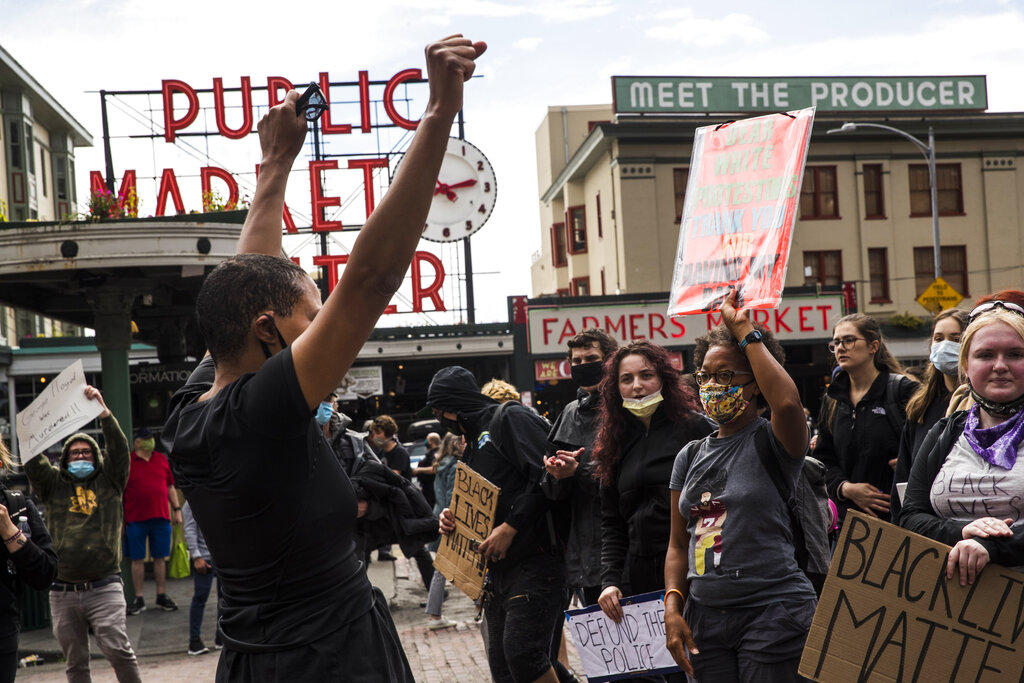 Protesters continue past Pike Place Market during the #SeattleJusticeForGeorgeFloyd march on Saturday, June 6, 2020, in Seattle, Washington. The death of George Floyd at the hands of police last month in Minneapolis has sparked nationwide protests for police reform. (Amanda Snyder/The Seattle Times via AP)

Seattle police said on Twitter that several officers were injured by “improvised explosives” thrown by a crowd. Officers responded with pepper spray. Earlier, a large crowd of medical workers, many in lab coats and scrubs, marched to City Hall, holding signs reading, “Police violence and racism are a public health emergency” and “Nurses kneel with you, not on you” — a reference to how a white officer pressed his knee on Floyd’s neck for several minutes.

Atop a parking garage in downtown Atlanta, a group of black college band alumni serenaded protesters with a tuba-heavy mix of tunes. Standing within earshot, business owner Leah Aforkor Quaye said it was her first time hitting the streets.

“This makes people so uncomfortable, but the only way things are happening is if we make people uncomfortable,” said Quaye, who is black.

In Raeford, North Carolina, a town near Floyd’s birthplace, people lined up outside a Free Will Baptist church, waiting to enter in small groups. At a private memorial service, mourners sang along with a choir. At the front of the chapel was a large photo of Floyd and a portrait of him adorned with an angel’s wings and halo. 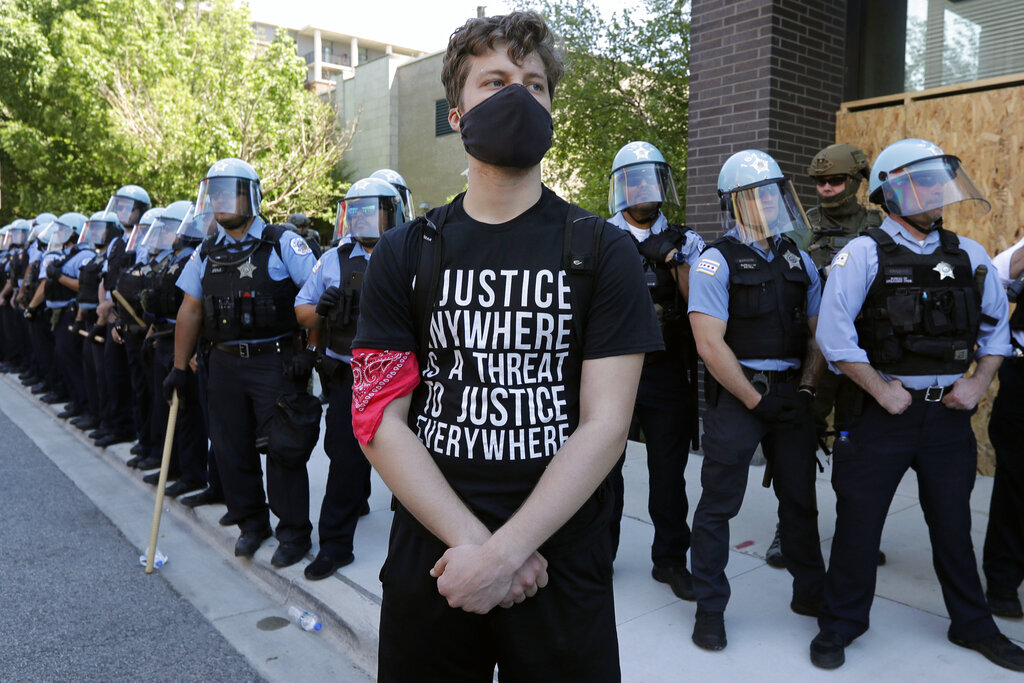 A demonstrator stands in front of Chicago Police officers during the March for Justice in honor of George Floyd Saturday, June 6, 2020, in Chicago. Demonstrators who gathered at Union Park marched through the city's West Side on Saturday afternoon, as the city prepared for another weekend of rallies. (AP Photo/Nam Y. Huh)

Floyd’s body will go to Houston, where he lived before Minneapolis, for another memorial in the coming days.

Protesters and their supporters in public office say they’re determined to turn the outpouring into change, notably overhauling policing policies. Many marchers urged officials to “defund the police,” which some painted in enormous yellow letters on the street leading to the White House near a “Black Lives Matter” mural that the mayor had added a day earlier.

Theresa Bland, 68, a retired teacher and real estate agent protesting at the Ohio Statehouse in Columbus, envisioned a broader agenda.

Some change already has come. 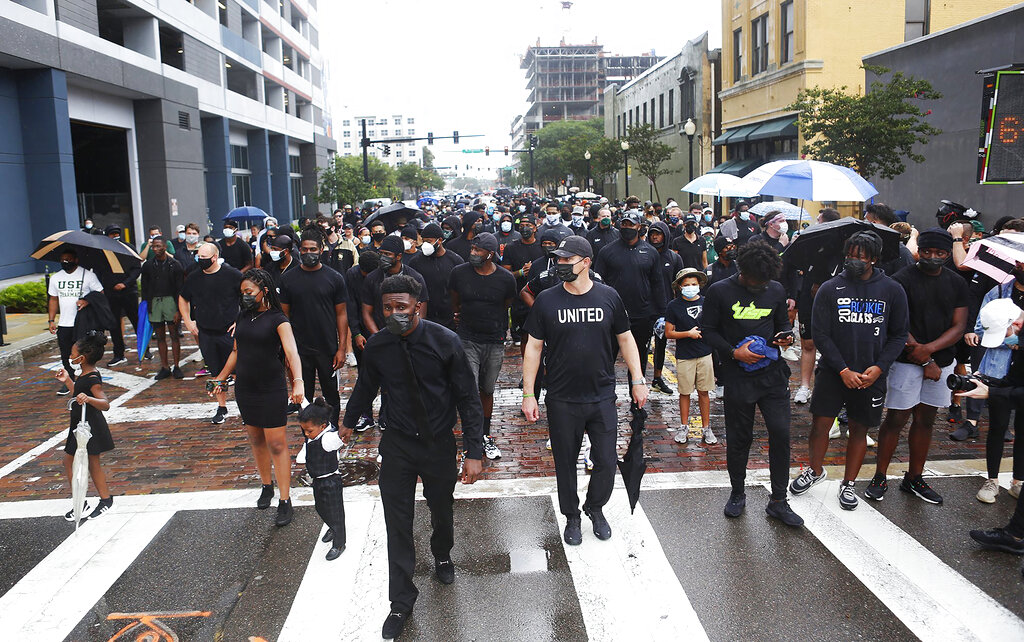 From left; Kiana Campbell, 24, walks with her daughter, Heaven Campbell, 6, and 2-year-old son King, along her partner KJ Sails, and USF football coach Jeff Scott during the unifying walk in memory of George Floyd and Martin Chambers, in Tampa, Florida, on Saturday, June 6, 2020. The death of George Floyd at the hands of police last month in Minneapolis has sparked nationwide protests for police reform. (Octavio Jones/Tampa Bay Times via AP)

The police chief in Bellevue, a wealthy city near Seattle, largely banned officers from using neck restraints, while police in Reno, Nevada, updated their use-of-force policy.

Congressional Democrats are preparing a sweeping package of police reforms, which is expected to include changes to immunity provisions and creating a database of use-of-force incidents. Revamped training requirements are planned, too, among them a ban on chokeholds.

The prospects of reforms clearing a divided Congress are unclear.

While police in some places have knelt in solidarity with protesters, their treatment of some marchers also has generated more tension.

Two officers in Buffalo, New York, were charged Saturday with second-degree assault after a video earlier this week showed them shoving a 75-year-old protester, who smashed his head on the pavement. Both pleaded not guilty.

Most protests in Europe were peaceful. In London, however, clashes with police erupted after thousands gathered amid a cold rain. In the French city of Marseille, authorities fired tear gas and pepper spray as protesters hurled bottles and rocks.

Back in North Carolina, the Rev. Christopher Stackhouse recounted the circumstances of Floyd’s death for the congregation.

“It took 8 minutes and 46 seconds for him to die,” Stackhouse said at the memorial service. “But it took 401 years to put the system in place so nothing would happen.”

Pritchard reported from Los Angeles and Foreman from Raeford, North Carolina. Associated Press staff from around the world contributed to this report, including Jeff Chiu in San Francisco; Jill Colvin in Washington; Jeff Amy in Atlanta; Julie Carr Smyth in Columbus, Ohio; John Leicester in Paris; and David Crary and Brian Mahoney in New York. 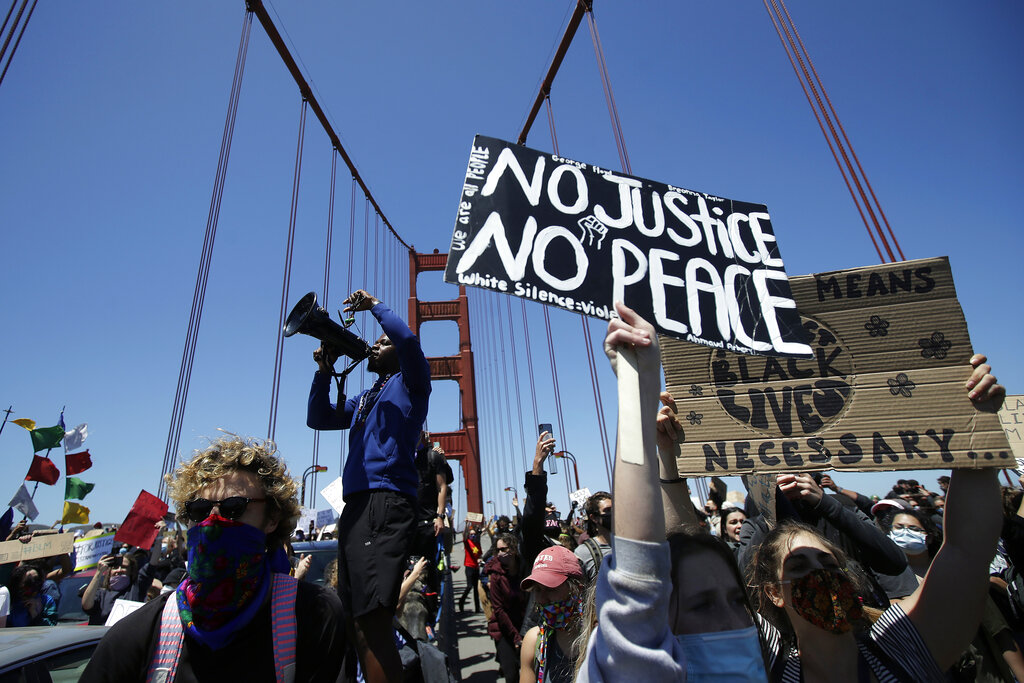 A man speaks into a megaphone while standing with others on the center divider as traffic is stopped on the Golden Gate Bridge in San Francisco, Saturday, June 6, 2020, at a protest over the death of George Floyd. Floyd died May 25 after being restrained by Minneapolis police. (AP Photo/Jeff Chiu) 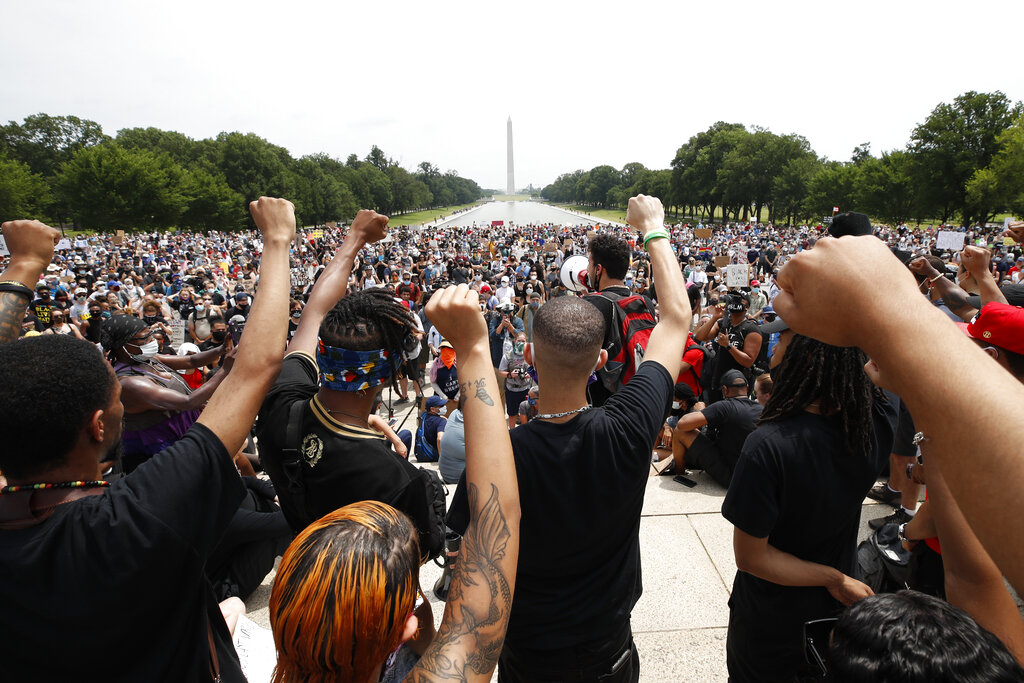 Demonstrators protest Saturday, June 6, 2020, at the Lincoln Memorial in Washington, over the death of George Floyd, a black man who was in police custody in Minneapolis. Floyd died after being restrained by Minneapolis police officers. (AP Photo/Alex Brandon) 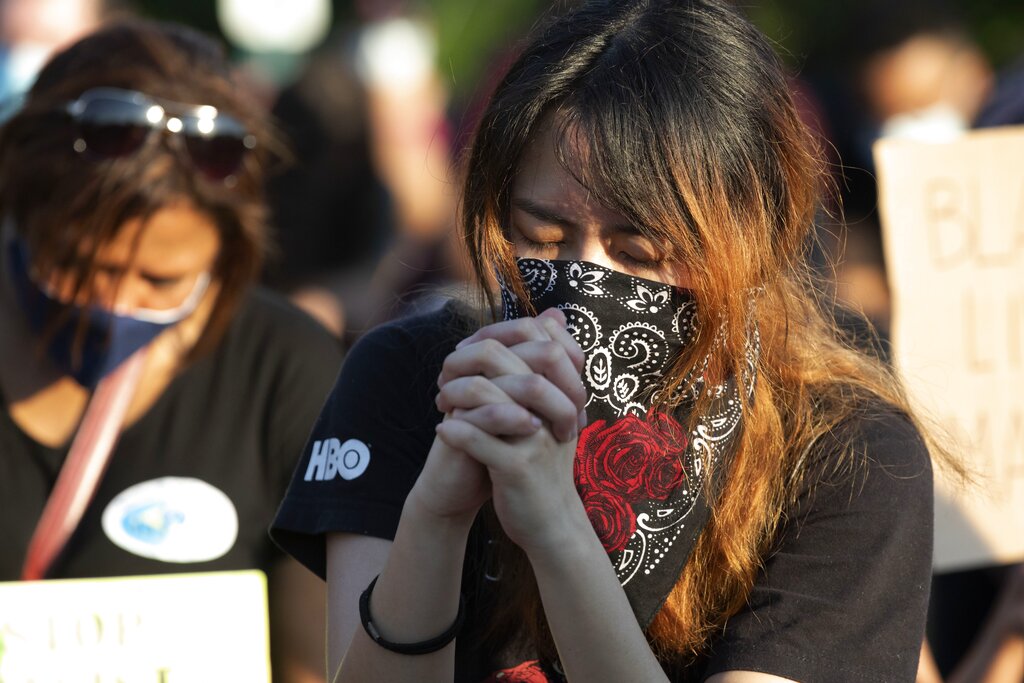 People kneel in silence during a protest against police brutality, Saturday, June 6, 2020, at the University of Massachusetts in Boston. (AP Photo/Michael Dwyer)