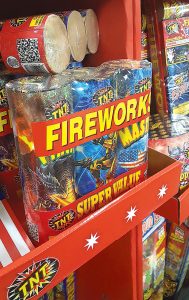 While fireworks are sold in many stores and at various outdoor tent locations around the local area, the public is being reminded that a Wheeling city ordinance prohibits any fireworks that propels into the air that is combustible or explosive, flammable or audible, including bottle and sky rockets, roman candles and sky lanterns.

WHEELING — As the Fourth of July holiday approaches, the general public is being reminded of the hazards associated with the use of fireworks, and those who plan on celebrating are reminded not to use prohibited fireworks within the city.

A city ordinance prohibits any fireworks that propels into the air that is combustible or explosive, flammable or audible — including bottle or sky rockets, Roman candles and sky lanterns.

Although prohibited fireworks can still be purchased after a change in state law in 2016, they are still not permitted to be used within the City of Wheeling, according to local public safety officials. Failure to obey the city’s ordinance can result in a citation from law enforcement.

The ordinance exists under the city’s fire prevention code in order to keep people and properties safe from any potential fire hazard, according to Wheeling Fire Chief Larry Helms. He said with so many homes and structures being in such close proximity of each other within the city, it creates a tremendous safety issue.

“We really don’t have the open space to be able use those types of fireworks safely and it creates not only an immediate danger but a fire hazard to our neighbors,” Helms said.

He said while the city fire department typically responds to a couple of calls every year relating to fireworks over the July Fourth holiday, as of Monday, the department had not responded to any calls.

“We have a few (calls each year), but the majority are answered by the police. … Most of the calls are concerned citizens calling the police to check the area,” he added.

The Wheeling Police Department responded to several calls from concerned citizens about fireworks being set off in different areas of the city over the weekend.

While the ordinance does allow certain types of fireworks — such as sparklers, fountains, party poppers, snaps, smoke devices, and various non-propellant noisemakers — to be used within city limits, they should always be used with safety precautions and under adult supervision, according to Helms.

According to The U.S. Consumer Product Safety Commission, 200 people nationwide on average visit the emergency room every day with fireworks injuries in the weeks surrounding the Fourth of July holiday. With sparklers burning at temperatures around 2,000 degrees, it is recommended to have a bucket of water handy to properly extinguish them.

Helms also reminds the public they should take the proper safety precautions when it comes to other summer holiday activities such as backyard grilling and the use of fire pits. Helms said a grill should never be used beneath a roof and to keep grills and fire pits a safe distance from the house or any structure. He said it is recommended to keep grills at least 10 feet away from structures and to remember to be courteous to your neighbors by not putting off a lot of smoke.

Helms said while there are not as many public fireworks displays being held around the Ohio Valley this year due to the COVID-19 crisis, it is always better to leave fireworks displays to the professionals. He reminds those attending public displays to maintain proper social distance themselves from others in the midst of the pandemic.

* Always have adult supervision in place and never allow young children to play with or ignite fireworks.

* Never place any part of your body directly over a fireworks devise when lighting the fuse and back up at a safe distance immediately after lighting them.

* Never try to re-light or pick up fireworks that have not fully ignited.

* After fireworks finish burning, douse the spent device with plenty of water from a bucket or hose.

* Make sure fireworks are legal before buying or using them.