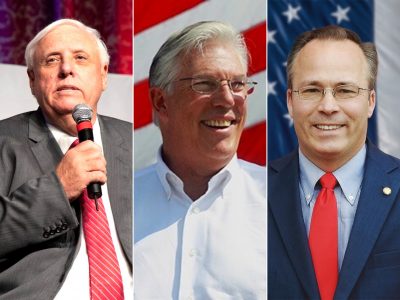 CHARLESTON — Republican and unaffiliated voters have a decision to make between now and Tuesday, June 9: to keep Gov. Jim Justice as their nominee for the general election in November or to choose from seven other candidates.

Right now, Justice’s closest competitors are businessman and former Commerce Secretary Woody Thrasher and former Berkeley County delegate Mike Folk. All three have had to adapt their campaigns as the coronavirus pandemic has made it harder to campaign, but they’re not taking the final 10 days of the campaign for granted.

Justice says he is a people person. He enjoys being out among the people at campaign events, town halls, and at high school basketball games where he coaches the Greenbrier East High School girls basketball team. Campaigning for his re-election gave Justice an opportunity to interact with the public.

“I hate like crazy I haven’t had the opportunity to be out there because it was enjoyable,” Justice said. “I enjoyed hearing their frustrations and hearing their struggles and … taking all their questions.”

All of that came to a grinding stop in March when the coronavirus pandemic started to spread across the U.S. Justice issued a state of preparedness order on March 4. By March 13, he ordered schools to shut down and even canceled the state girls basketball tournament the same day his team was slated to hit the court.

Justice has been leading the state’s coronavirus briefings nearly every day since March 11 via video livestream. The virtual briefings are a way for Justice to continue to lead while also keeping himself protected. At 69 years old, Justice falls into more than one high-risk category for COVID-19.

“I’m a hands-on guy … that’s what I do,” Justice said. “I’m not willing to sit in an ivory tower in an office and just look down on people.”

West Virginia’s coronavirus case numbers are some of the lowest in the U.S. Justice credits that to quick action to shut down schools, implementing a stay-at-home order for part of March and April, quickly running to hotspots for mass testing and everyday West Virginians following social distancing guidelines. Even with successes, Justice still laments the 74 people who have died in West Virginia.

“We still lost 74 people and that’s 74 people too many, but we pushed the right buttons,” Justice said. “We’ve pushed the buttons to protect us as best we possibly can. But I always underlined just this: the people of West Virginia showed the world how good they are. They listened, they’re smart and they’re innovative, they’re creative and they’re craftsmen. They just listened and they did it.”

Justice won the governor’s seat as a Democrat in 2016, but switched parties to Republican in 2017 at the behest of his friend, President Donald Trump. When he came in to office, the state had a $500 million budget hole, crumbling roads and teachers agitating for a pay raise. Since then and until the coronavirus shut down the economy, the state started seeing tax revenue increase, a Roads to Prosperity program for new highway construction and additional work on secondary roads and two years of pay raises for teachers.

But the next governor, whether it is Justice or not, will have to continue to weather the health and economical storm created by the coronavirus. Justice, an optimist, said he expects the state’s economy to recover, but he wants the voters of West Virginia to continue to let him coach the game.

“I’ll let the voters make their decision, but … truly in the bottom of my heart I believe that West Virginia has its better days ahead,” Justice said. “We’ve crawled out of a bad hole, but now we’re truly on that launch plan that I’ve talked about over and over. You’ve got a good pilot right now and the pilot’s going to not let you down. As we go forward, I’m excited about what’s going to happen in West Virginia.”

Thrasher is used to sitting down to sketch out plans for new buildings, infrastructure projects and roads. But the coronavirus has caused him to redraw his campaign strategy.

The co-founder of the Thrasher Group, Thrasher went on to become Justice’s cabinet secretary of the state Department of Commerce in 2017. He negotiated the multi-billion-dollar memorandum of understanding with China Energy for investment in West Virginia’s natural gas development projects and managed the beginnings of the troubled RISE West Virginia flood relief program, but Justice called for his resignation in 2018.

Since then, Thrasher has followed in Justice’s footsteps by switching from a Democrat to a Republican. Thrasher has hit the road, meeting with Republicans and unaffiliated voters and hitting the parade circuit at fairs and festivals. The coronavirus has put a halt to all of that. Thrasher said the virus has made it much harder to campaign.

“It’s been a real detriment to us because we were not able to do all the things that we were doing so effectively,” Thrasher said. “It’s been a huge bonus to the governor because he gets the chance to be on live TV every day for an hour and then morning and evening broadcasts and the journalism that follows from that.”

Instead of throwing up his hands, Thrasher doubled down. He had campaign volunteers make 2,500 calls every day to likely voters. He also turned his campaign team loose across the state to deliver food to first-responders.

“We have some unfortunate things have happened to the campaign, but now let’s not cry in our milk,” Thrasher said. “I could not be prouder of my team. We pivoted, we adapted, and I think we’ve dealt with this situation very well. Now that it’s opened up a bit, we are trending back toward those things that worked so well for us pre-coronavirus.”

Thrasher believes he is the best man for governor, calling Justice a person who reacts instead of being proactive. In his first 100 days, Thrasher said he would create several task forces to tackle every component of state government: tax structure, education policy, transportation, economic development, infrastructure, drug policy.

The goal is to come up with creative and innovative ways to reform state government. Thrasher believes that the coronavirus crisis is the perfect opportunity to make substantive reforms using his engineering and planning know-how.

Folk, as an international airline pilot, is used to being able to look down and see the big picture. As a former member of the House of Delegates representing Berkeley County, Folk was known for his staunch defenses of the state and U.S. constitutions, as well as being a fiscal hawk. He even submitted his own version of the state budget one year.

When Folk is not flying, the father of five children is farming. Hard work comes easy to Folk, which is why campaigning across the state in his pick-up truck was a constant part of his campaign.

“I was really just starting to hit my stride in that early March timeframe,” Folk said. “In fact, the week that (Justice) tried to shut everything down I had three town halls scheduled on a Friday and Saturday.”

He hasn’t been a fan of how the state has handled the economic portion of the coronavirus, calling the March and April stay-at-home order and the restrictions on businesses unconstitutional.

“The reaction to this is, I think, overblown,” Folk said. “I think it should have been left in the hands of individuals to decide (to shut down), not the governor. I think there’s a clear violation of the West Virginia Constitution.”

Folk said his priorities for helping the state recover from the economic effects of the coronavirus is right-sizing government. He would require state agencies to return any unused money in their budget at the end of every fiscal year. He would reform the Department of Transportation and Division of Highways to make them leaner and more efficient to free up more funding for road maintenance.

On the health care front, the certificate of need law limiting the number of health care facilities in the state would be repealed, price transparency of medical services would be implemented and state employees would get access to high-deductible major medical plans with health savings accounts to help save the state on health care costs but continue coverage for state workers and even free up money for raises.

Folk wants voters to know that he understands them better than what Thrasher or Justice can. Folk said he is a hard worker, knows how to stretch a dollar, and he can be a true representative of the people, the taxpayers.