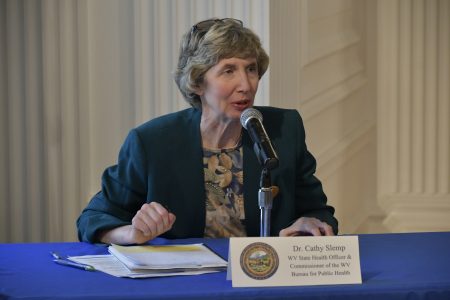 In a press release Wednesday afternoon from the Governor’s Office, Justice and Department of Health and Human Resources Secretary Bill Crouch accepted Slemp’s resignation citing a “lack of confidence” in Slemp’s ability to lead the office.

Citing Randolph County and the Huttonsville Correctional Facility as examples, Justice said that there were six active cases of infected inmates at Huttonsville as of Monday – a number that decreased to three as of Tuesday evening, while 123 inmates have recovered after an outbreak at the facility was discovered at the end of May. Yet, the DHHR coronavirus dashboard was still showing 142 active cases as of Sunday. After corrections were made to the data, there are now only 56 active cases in Randolph County.

“There’s either a breakdown at the local level or there is a breakdown at our level,” Justice said. “If we were on our game here in DHHR – in Dr. Slemp’s office – if we’re on our game and you’re listening to the governor say that there are six active cases at Huttonsville and you’re looking at the reports you’re putting together and sending them to me on active cases and you’re looking at Randolph County and they report 100 and some odd cases, then you’re not doing your job and you’re not having the passion behind what you’re putting together.”