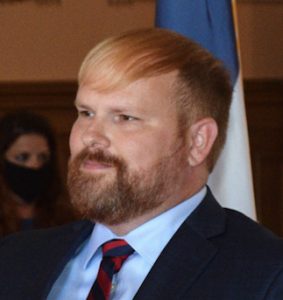 WHEELING — The city of Wheeling’s 311 non-emergency reporting system is in need of serious upgrades to make it effective, according to Councilman Ben Seidler, who has volunteered to take the lead with developing recommendations to bring improvements to the system.

The city’s 311 online citizen request system was introduced in January 2019. The service on the city of Wheeling’s official website allows citizens to send location-based service requests such as missed sanitation pickups, pothole notifications or property maintenance complaints to the appropriate city department in order to increase efficiency.

Users of the site can choose to be kept informed as to the status of the request submitted.

“The city launched this tool a couple of years ago with a decent amount of fanfare with the purpose and mission of providing greater efficiency, accountability, transparency into non-emergency services while maintaining the highest possible level of customer service,” Seidler said. “I’m disappointed to say that over the last two years, our 311 system has not been perceived by the general public — at least in my ward — as an effective tool in getting these issues resolved in a timely or acceptable fashion.”

Representing Ward 2 in the city’s neighborhoods of Wheeling Island, Fulton, North Wheeling and the downtown, Seidler noted that among the features the 311 system is supposed to handle are complaints about blighted properties and “the constant, never-ending battle with slum properties continuing to allow their trash to be scattered across streets and alleys” in the city.

“The level of customer service reported by the majority of folks in my ward on this topic has been less than desirable,” Seidler told fellow city council members and City Manager Robert Herron during the most recent council meeting. “Residents frequently remind me that 311 is a waste of their time, and when they log complaints, they don’t get a response, and they don’t get a resolution.”

Seidler said he has spent some time digging into the matter and told city officials he thinks the issue primarily lies with the tool itself.

“I don’t think it gives our city very good reporting in order for us to get a handle on this stuff,” he said. “I know our individual departments are working hard to try to correct these, but I just don’t think the synergy is there across the board.”

In order to improve the 311 system, Seidler asked that council make it a priority, noting that he would take the lead of recommending ways to improve the system from a technological perspective. Seidler said he will give updates to the public on the progress.

“I appreciate our city staff who are doing everything they can to get these done, I think we have a gap with the tool, and I’d like to help be a part of the fix to address that,” Seidler said. “It appears to have 202 open requests with an average age per ticket of 227 days. I know that’s not correct, but that is what the data shows us today. Residents are the ones who submit these tickets. When it kind of goes into radio silence, it’s a bad customer experience, regardless of the fact that the issues are probably getting fixed in a more timely fashion.”

The city manager said Seidler shared his initial findings with him, and his office has begun to address the issues.

“I have relayed my concerns, his concerns as well as the community’s concerns regarding the timeliness of reporting of these complaints and keeping the system updated,” Herron said, noting he and his staff had a lengthy discussion about the 311 system. “We are going to be working towards improving staff performance on the 311 system, and we welcome Mr. Seidler’s comments and input to improve that system.”