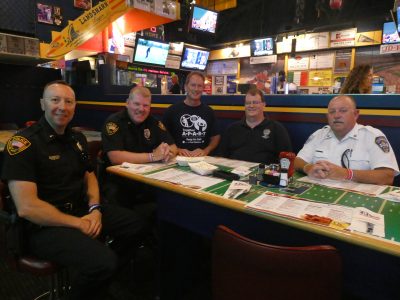 WHEELING — When COVID-19 canceled Main Street Bank’s plans to honor its shareholders and customers, the bank opted to celebrate local first responders instead.

On Tuesday, law enforcement, fire and EMT workers in Brooke, Ohio and Marshall counties were invited to come get free “Meals for Heroes” courtesy of Main Street Bank.

The effort also helped out a number of local restaurants that have re-opened for dining.

First responders were invited to stop by participating restaurants between the hours of 11 a.m. and 7 p.m. Tuesday, and show identification to receive their meal, with Main Street Bank picking up the check.

Main Street Bank has been in operation for 19 years, and each of those years it has hosted a cookout for shareholders and customers.

“With social distancing and the pandemic, we had to put those on hold this year,” explained Richard Lucas, president of Main Street Bank.

Instead, the idea evolved to show appreciation and give “a nice day” to the first responders who have been putting in extra work in recent weeks, he said.

Wheeling Police Chief Shawn Schwertfeger and Fire Chief Larry Helms were among those seen having lunch with Lucas at noon Tuesday at T.J.’s Sports Garden.

Lucas expects the cookouts for shareholders and customers will resume next year, but he also expects the bank will again take a day to buy first responders a meal.

“You can pretty much bank on this being a tradition,” he said.