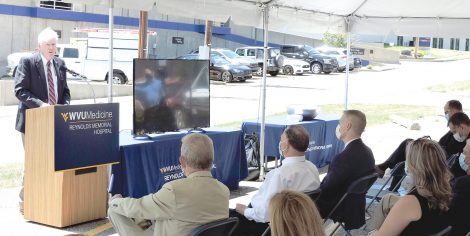 The 24-bed unit facility in Glen Dale is filling a need left by the closure of the Ohio Valley Medical Center, which had operated Hillcrest Behavioral Health Services that was discontinued with the closure of OVMC and East Ohio Regional Hospital last year.

Dr. David Hess, president and CEO of the hospital, described the day as one of “promises kept, trust and new beginnings” as the hospital unveiled the new clinic, alongside a nine-bed expansion to the emergency room.

Hess said his mother, an inpatient psychiatric nurse at United Hospital Center in Bridgeport, had been the one who instilled him with a passion for caring for others.

“She taught me that mental illness is not a chosen problem for people to have. They didn’t do anything wrong to deserve them, so I shouldn’t be judgmental or look down on these folks. Just be thankful if you don’t suffer from mental illness,” Hess said.

“This lesson rings true louder today more than ever, and (poor) mental health touches all of us. It’s in our families, our friends. It can tear relationships apart. It can tear people apart, and this is why we needed this behavioral health unit. Oftentimes, for these patients, the only recourse for a severe mental illness is a unit like this. … We need to be there for them as a community, as a healthcare system, and as a hospital. This opening today was not only the right thing to do, but was something we had to do.”

Albert Wright, president and CEO of WVU Health System, served as keynote speaker for the event, which was attended by several dozen local officials and Reynolds employees.

He spoke of the extensive improvements Reynolds has seen since its 2016 partnership with the health system, during which time Hess said the hospital has seen nine new facilities open their doors within the hospital complex.

“If you came here five years ago, the parking lot was empty. HVAC didn’t work all the time. There was an abandoned building out front. You look at it today, it looks like a million bucks,” he said. “It was tragic and heartbreaking when Hillcrest closed down suddenly. But we landed on our feet, and we see a lot of the same staff back here.”