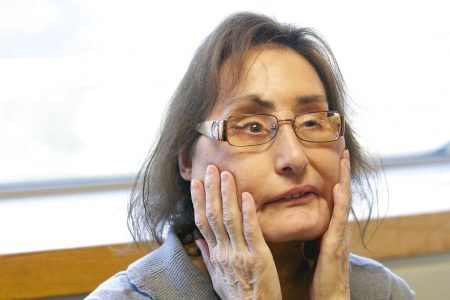 FILE - In this Sept. 14, 2010, file photo, Connie Culp, the nation’s first partial face transplant recipient, speaks with the Associated Press at the Cleveland Clinic in Cleveland. Culp, the recipient of the first partial face transplant in the U.S., has died at 57, almost a dozen years after the groundbreaking operation. The Cleveland Clinic, where her surgery had been performed in 2008, said Saturday that Culp died Wednesday, July 29, 2020 at the Ohio clinic of complications from an infection unrelated to her transplant. (AP Photo/Jason Miller, File)

Connie Culp, the recipient of the first partial face transplant in the U.S., has died at 57, almost a dozen years after the groundbreaking operation.

The Cleveland Clinic, where her surgery had been performed in 2008, said Saturday that Culp died Wednesday at the Ohio clinic of complications from an infection unrelated to her transplant.

Dr. Frank Papay, who is the chair of Cleveland Clinic’s dermatology and plastic surgery institute and was part of Culp’s surgical team, called her “an incredibly brave, vibrant woman and an inspiration to many.”

“Her strength was evident in the fact that she had been the longest-living face transplant patient to date,” Papay said in a statement. “She was a great pioneer and her decision to undergo a sometimes-daunting procedure is an enduring gift for all of humanity.”

Culp’s husband shot her in the face in 2004 in a failed murder-suicide attempt for which he was imprisoned for seven years. The blast destroyed her nose, shattered her cheeks and shut off most of her vision.

Culp underwent 30 operations to try to fix her face. Doctors took parts of her ribs to make cheekbones and fashioned an upper jaw from one of her leg bones. She had countless skin grafts from her thighs. Still, she was left unable to eat solid food, breathe on her own, or smell.

In December 2008, Dr. Maria Siemionow led a team of doctors in a 22-hour operation to replace 80% of Culp’s face with bone, muscles, nerves, skin and blood vessels from a donor, Anna Kasper. It was the fourth face transplant in the world, though the others were not as extensive.

After the operation, her expressions were a bit wooden and her speech was at times difficult to understand, but she could talk, smile, smell and taste her food again. In 2011, Siemionow said Culp had “a normal face” after doctors refined the droopy jowls and extra skin they purposely left to make checkup biopsies easier.

“She’s smiling, she’s perfect. When she jokes, she kind of flickers her eyes. Her face is vivid. You can see emotions,” Siemionow said.

Culp made several television appearances and become an advocate for organ donation. Two years after her operation, Culp met with the family of Kasper, the donor, who had died of a heart attack. Culp told The (Cleveland) Plain Dealer: “They’re just really nice people.”

Kasper’s 23-year-old daughter, Becky Kasper, said she could see part of her mother in Culp, though their bone structures were different.

“I can definitely see the resemblance in the nose,” she said. “I know she’s smiling down on this, that she’s very happy.”