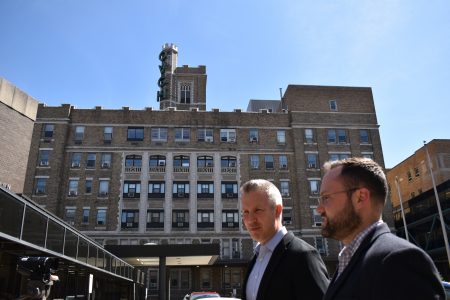 Due diligence on a matter as important as whether the city of Wheeling should acquire the old Ohio Valley Medical Center should not have a time limit. Wheeling City Council members are right to insist on looking before they leap.

It has been suggested it would be in the city’s interests in several ways if municipal government acquires the OVMC property. Its current owner, Medical Properties Trust, of Alabama, has offered to deed the land and buildings over if the city takes care of outstanding property taxes and pays closing costs. MPT has a total half-year tax burden of $561,244.28, according to records on file with the Ohio County Sheriff’s Tax Office. This includes the property taxes for the Robert C. Byrd Adolescent Behavioral Health Center, which is not part of the deal. It is expected closing costs would be $35,000 or less.

MPT reportedly wants the deal to be concluded by July 1, for tax purposes. Council already has approved first reading of an ordinance to clear the way for the transaction.

Second reading — and adoption — of the ordinance had been scheduled for a council meeting today.

But during a closed “executive committee” meeting last week, council members raised questions about the proposal. Though Mayor Glenn Elliott did not reveal precisely what those concerns were, he said council “identified various additional due diligence points that have to be further explored — some additional questions and discussions that have to take place with MPT.”

Again, the mayor did not reveal what information council members want or what needed to be discussed with MPT. It may be that answers have been obtained and discussions have been held. Perhaps that information will be related to council today.

But even if more about the proposal is revealed to council members today, Wheeling taxpayers will not have it immediately. They deserve a part in deciding whether to proceed with the deal.

Council members should vote to table the enabling ordinance. Taxpayers, not just city officials, should be part of the due diligence process.

Called to Act Against Bigotry

National news media outlets spent much of the weekend covering civil disorder — riots — in cities throughout ...

Ensure OVMC Is Asset, Not Burden

During their meeting scheduled for noon today, Wheeling City Council members are expected to resume discussion of ...

Long after COVID-19 is just a bad memory, substance abuse will remain a scourge in Ohio and West Virginia. Years ...

Though the financial woes facing Brooke County Board of Education members are serious, the situation could have ...

Many Americans care more about presidential elections than about balloting for local offices, some political ...