BRIDGEPORT — To say Bridgeport has had better seasons than the Bulldogs logged last winter would be a correct statement.

A program steeped with tradition only won two games a year ago. However, it was ravaged by graduation the campaign before and only had one returning letterman.

“Last year was definitely a down year for us,” head coach Donnie Cash said of his 11th season. “We got hit hard by graduation and didn’t have many returners.”

This season will be different in that aspect.

“We have the majority of our players back this year. We have seven lettermen,” he noted. “We are a year older and, hopefully, we are a year smarter basketball-wise.

“I’ve liked what I’ve seen so far. I like the attitude and the work ethic in practice. We haven’t had any bad attitudes. The kids are coming to practice every day and working their tails off.”

Leading the group of returning letterwinners is senior captain Guy Pagano, who will be a three-year lettermen after playing his freshman season at St. John Central. The 5-foot-8 point guard missed most of last season with a disc problem in his back. Cash said he is healthy and ready to go.

“Guy can be really good,” Cash allowed. “He has put on some weight. He’s a gym rat that loves the game and works on it constantly. He has to be one of our leaders and the kids look up to him.

“We’re looking for a big year from him. He’s our go-to guy.”

Back for his sophomore season is Duncan Pagano, who led the Bulldogs in scoring last year. He’s a 5-9 shooting guard.

“Duncan started every game for us last year and performed well for being thrown into the fire,” Cash said. “We’re looking for bigger and better things from him this season. Individually, he handled himself well last year. We can move him around in several different positions.”

“We can’t be selfish with the basketball,” he added. “We have to play team basketball and be willing to do everything we have to do to help our team every night we take the court.”

Cash is a 6-foot leaper who led the team in rebounding most games a year ago, while lending about 8 points a contest. The 5-11 Williams, who injured an ankle early in football and missed most of the season, is reportedly healthy and should be balanced on both ends of the court. Nowakowski, a 6-4 post player, will be a role player.

“Dane and Eli both played valuable minutes for us last year,” Coach Cash said. “We’re going to count on their senior leadership, and, hopefully, they can pick up their scoring. “Dylan is a role player and he has to play to his ability.”

Coach Cash has also been impressed with the Doyle brothers — 5-9 Mannix and 5-10 Macrea — who transferred from St. John Central earlier this school season. They reside in Bridgeport and will be eligible immediately.

“I’ve really been happy with their play,” Cash said. “Their attitudes and work ethic fit right in with the other guys, and that’s important. They are still learning the system and we’re looking to get them in the rotation because they can help us out.”

Another player Cash is looking forward to seeing back on the court is 6-7 senior Ricky Dunlap, who played as a freshman and sophomore.

“We would’ve liked for him to play last year to get that third year of experience, but he’s working hard every day in practice and getting better and better. He’s a big body inside and that’s something we lacked a year ago.”

WHEELING — Ohio County Schools took the first step toward the resumption of athletics during Monday's board of ... 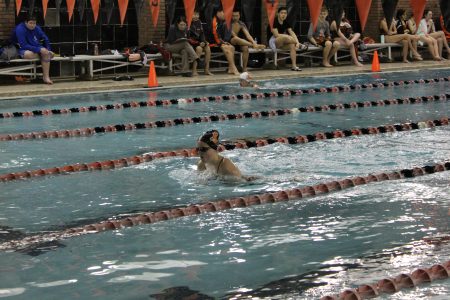 Linsly’s Behm to Swim at Allegheny