Cameron Poised To Make a Run

CAMERON — It was a tough end to the 2015-2016 season for the Cameron girls’ team but with the majority of its players returning this year, the Dragons are poised to make a run in the postseason.

In a sectional contest with Weirton Madonna last season, the Dragons held a halftime lead over the Blue Dons, despite having two players out with injuries. The Dons rallied in the second half to win and eventually advanced to the state tournament in Charleston.

Injuries took a bit of a toll on the Dragons last season and is already making an impact this year as junior Bailey Lyons is out for three weeks and senior Lindsay Paczewski could miss at least two months.

“It is very unfortunate to lose Lindsay,” Cameron coach Roger Cain said. “She is a great outside threat for us and is always hitting big buckets. Others will need to step up while she is out.”

Cain is entering his fifth year as the Cameron head coach and is coming off of a 12-10 record a season ago.

Although injuries could keep a few players sidelined, the Dragons’ only loss to graduation was Marissa Meintel.

“Marissa (Meintel) was a major leader, a hustler and a great defender,” Cain said. “Everybody followed her lead. She was very versatile and would guard anyone. She did anything that was asked of her.”

Junior Courtney Walker has been the Dragons leading scorer for the last two years and has started on the varsity team in both her freshman and sophomore seasons and should again be a top scorer on the team.

Other juniors who have started since their freshmen year are Kelsie Meintel, the younger sister of Marissa Meintel, and Autumn Gossett.

“Kelsie Meintel will be a major contributor for us along with Walker this year,” Cain said. “Gossett is not only our point guard but she is our rock as well.”

Junior Peri Gray was a starter for Cameron last year and could be someone to look at for a breakout season on the court.

“Gray is a good defender, rebounder and is the motor of our team,” Cain said. “We are looking for her to do a little more on offense this year.”

Two seniors who could step up in the absence of Paczewski are Claire O’Neil and Erika Whipkey.

Rounding out the strong and talented junior class are Katie Bayles and Asriel Yoho.

The only sophomore taking the floor for Cameron is Jordyn Hughes, who saw a lot of time as a freshman and will add to the experience, which is a strength for the Dragons.

“We have a lot of experience coming back this year,” Cain said. “We have been having good practices thus far and everything is falling into place.”

Two freshmen round out the roster with Maelyn Canada and Stephanie Starcher, who could also see some action in their first season.

“Everybody on the roster could see some varsity time this year,” Cain said. “Canada and Starcher will give us some big spot minutes at times.”

“Our goal every year is to be in Charleston at the end of the season,” Cain said. “Cameron has never had a basketball team make it to Charleston and we want to be the first team to get there.

“We want to improve daily. Only one team gets to experience the euphoria at season’s end. Every team’s final game is a loss except one and we want to be that one team.” 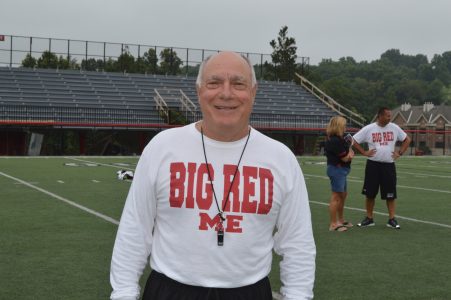 WEIRTON — Sometimes, you just know when the time is right. Mike Granato knew it was time. After 21 ...

Fall Sports in Ohio Likely at Hands of Local Schools

COLUMBUS — Superintendents across Ohio are facing many important decisions in the coming weeks pertaining to how, ...