Bellaire Stymies River’s Rally, Goes on for a 42-16 Triumph

RICK Thorp, For the News-Register 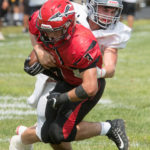 Photo by Paul Krajnyak Bellaire’s Cole Porter scores one of his two touchdowns Saturday at Nelson Field in Bellaire while defended by River’s Stone Thompson.

BELLAIRE — As the fourth quarter began Saturday at Nelson Field, it appeared visiting River had the momentum.

The Pilots scored with less than a minute remaining in the third to trim their deficit against Bellaire to 12.

But the Big Reds responded with what got them the lead in the first place — a clock-draining scoring march. This one shaved nearly five minutes off the fourth-quarter clock, put them up 19 and slapped the finishes touches on a 42-16 triumph in season opener for both clubs.

“That was big,” Bellaire coach Mark Spigarelli said of the drive, which featured 11 plays and concluded with Kaleb Pitchford’s 2-yard run. “Those guys just got together and said ‘Look, we’re not losing.’

“They did what they had to and kept blowing them off the ball. We just wore them down. That’s great because that’s what we wanted to do.”

Bellaire’s rushing attack was the story of the afternoon, as it dominated the Pilots to the tune of 49 carries for 253 yards and five touchdowns. Cole Porter led the way with 175 yards and two scores on 30 carries.

“If we could’ve closed the gap (after we scored) it might’ve been different,” River coach Mike Flannery said. “We had them at third-and 7 and then they bust one.”

On that play, Big Reds quarterback Bobby Roth hit Cole LaRoche for 11 yards over the middle setting the stage for Pitchford, who finished with 57 yards, two plays later.

“That’s kind of what we wanted to do,” Spigarelli said of his team’s ground prowess. “That’s our M.O.”

Of the Big Reds’ five offensive scores, two came on drives of 10 plays or more. Porter did most of the damage, chipping away at the Pilots defense on mostly small runs up the middle. His longest run was 19 yards, coming on the Big Reds’ final drive, which resulted in him scoring for the second time.

“I’m proud of the guys because they’ve been lifting their butts off since January lifting weights,” Spigarelli said. “It showed (Saturday) how bigger and stronger we are. That’s what we wanted to do out of the gate, run the ball and wear them down.”

“We came up here and we played,” he said. “We were competitive and we had our opportunities. We had a couple of breakdowns here and there. The attrition caught up to us. Bellaire has a good team.”

Bellaire got on the board first when Andrew Kolenich intercepted a Stone Thompson pass and returned it 31 yards for a touchdown midway through the first quarter. The Big Reds lead ballooned to 21-0 late in the second quarter on shorts runs by Roth and Porter.

River got on the board with 80 ticks left in the first half. Thompson found a wide open Michael Johnson at the goal line and the sophomore did the rest. Carter Dennis’ conversion run — he also had a conversion catch — made the score 21-8 at halftime.

Dennis later scored from 1 yard out with 36 seconds left in the third quarter.

Flannery found many positives, but acknowledged many speed bumps that need paving.

“We had a game plan going in and we executed some things well and some things not so well,” he said. “That’s why they make films and that’s why we’ll watch them on Monday and correct them and get ready for Southern (at home) next Friday.”