Patriots Are Lighting Up Scoreboard 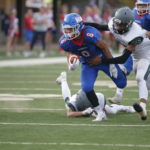 Photo by Alex Kozlowski Kenya Robinson (8) and Wheeling Park have been lighting up the scoreboard this season.

WHEELING — When Wheeling Park steps on the field, one thing is for certain: points are going to scored. The Patriots haven’t been shy to light up the scoreboard this year as they have averaged just over 50 points per contest in their first four games. They put up 66 against Brooke, 34 against Taylor Allderdice, 45 on University and 56 against Cambridge.

“I just think we have a bunch of guys working together, honestly,” Daugherty said. “There’s 11 kids on the field and all 11 are living for each other. They’re trying to make sure we get four to five (yards) and that’s important. One guy steps away from the 10 and try to make a big splash play and you’re playing without the full team. I think these guys care about each other. They don’t care who gets the credit, they care about that. The wide receivers know they’re going to block a ton and they will make a couple of plays and big catches.”

Alex Dunlevy has been a dual threat for Wheeling Park at quarterback. Going into last week’s game against Cambridge, he had completed 75.8 percent of his passes with six touchdowns and zero interceptions. The junior kept piling them on going 10 of 14 for 137 and four touchdowns to four different receivers.

Another added feature for the Patriots is having multiple options at tailback. Kenya Robinson stepped in a vital role against University two weeks ago as Rapheal Bradley went down with a minor injury. All the junior did was set a school record for carries in a game while compiling 220 yards and a score.

He followed that up with a 194-yard and one score performance against Cambridge. He has totaled 577 yards this season and finding the end zone five times.

“Very happy with him and it gave us anther week to rest Rapheal (Bradley),” Daugherty said. “We think Rapheal will be 100 percent (this) week, so now we’ll be back to using two, maybe even three backs. That’s a big plus. Tailbacks are going to get banged up. If you feel like you have one or two more to go to, it’s a nice luxury to have.”

Even missing most of the past two games, Bradley still has 353 yards and two scores.

Even though his number has not been called on much, Steven Mitchell has been a great role player for the Patriots. Mitchell had 65 yards and a touchdown last week against the Bobcats and also a crucial score against the Hawks.

“He made some key first downs at the end to control the clock and keep that clock moving,” Daugherty said. “He did that (against University) too. His number didn’t get called a ton of times, but when his number was called, he was ready, he made plays, he has great feet and good vision.”

Devaughn McWhorter leads the receiving core with 219 yards on 10 catches and five touchdowns. Jack Stakem, had hauled in 13 catches for 117 yards and one score.

While the skill players are putting up the points, the offensive line has been making sure its quarterback has time to throw and make running room for the tailbacks.

“We would hope that would be the strength of our football team,” Daugherty said. “So far it has been. Hopefully that continues. But I’m sure we’ll turn on film and find something they need to do better.”

The Patriots also have three special team touchdowns along with a fumble recovery for a score on defense.

Purple Riders running back ran for a staggering 311 yards and four touchdowns as the Purple Riders came back to defeat Harrison Central.

Defensive Players of the Week

Was dominant as always with 19 tackles and 1.5 sacks — seven for loss as the Maroon Knights stayed undefeated in a victory over Fayetteville.

Paced the Redskins defense with 20 tackles and two forced fumbles.

∫ Trevor Fante, Indian Creek: Redskins tailback rushed 24 times for 142 yards and a touchdown in a loss to St. Clairsville

∫ Matt Saxon, Paden City: The Wildcats earned their first victory this season behind the ground attack of Saxon (6-146-3 tds).

∫ Brady Kolb, St. Clairsville: Red Devils running back was a bruiser in a victory against Indian Creek, rushing 28 times for 133 yards and two touchdowns, including the game-winner late.

∫ Tyler West, Tucker Coultrap, Harrison Central: Coultrap had 113 yards and two touchdowns while West tallied 105 and one score for the Huskies.

∫ Donavan Kirby, Weir: Ran the ball 26 times for for 178 yards and three scores as the Red Riders defeated Petersburg.

∫ Alex Dunlevy, Wheeling Park: Went 10 of 14 for 137 and four touchdowns as the Patriots stayed unbeaten.

∫ Kobe Mitchell, Harrison Central: Huskies QB threw for 141 yards and a touchdown in a loss to Martins Ferry.

∫ Camden Bates, Brooke: Caught five passes for 90 yards and a touchdown to lead the receiving core for the Bruins.

∫ Cal Kildow, Union Local: Jets quarterback threw for 80 yards and a touchdown, while rushing 28 times for 144 yards and a score in helping Union Local snap a two-game skid.

∫ Mike Johnson, Carter Dennis, River: Johnson scored four touchdowns against the Redskins, two each rushing (18-69) and receiving (3-44). He also added six tackles and an interception. Dennis grabbed seven catches for 105 yards, rushed for a touchdown and on defense combined for 14 tackles, half a sack and a fumble recovery.

∫ Devaughn McWhorter, Wheeling Park: Hauled in a 38-yard touchdown pass, took a 90-yard kick return to the house and recovered a fumble in the end zone for a score for the Patriots.

∫ Anthony Coggins, Shadyside: Tigers signal caller passed for 173 yards and two touchdowns and rushed for 60 and a score in a victory over Shenandoah.

∫ Noah Trubiano, Kyle Storer, St. Clairsville: Trubiano make 15 tackles, two for a loss, and broke up a pass. Storer recorded 10 tackles, one for a loss, and forced two fumbles against the Redskins.