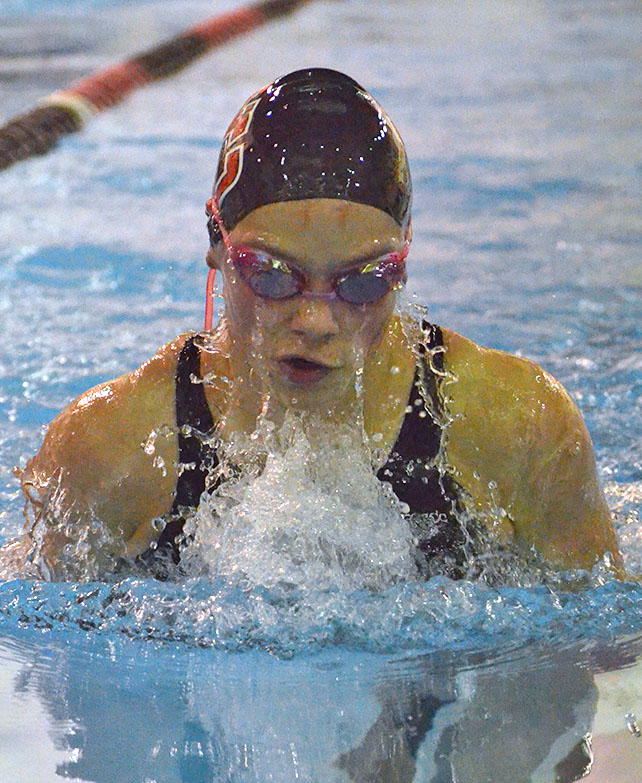 Buoyed by a record-setting performance by freshman Casadie DiBetta, St. Clairsville’s boys and girls swept the event inside Wheeling Jesuit University’s McDonough Center, which doubled as the Buckeye 8 Championships.

“It was a big day for both the boys and girls,” St. Clairsville coach Ernie Banks said. “I can’t think enough of them.”

With the Bill Brubaker OVAC Championships on tap next Saturday at Brooke High School, St. C.’s girls swept every event and had four girls claim a pair of individual titles.

“We have to keep grinding and focusing on the little things. Overall, though, we swam pretty decent.”

DiBetta started her day with a big triumph in the 200 IM. Her time of 2:16.93 was nearly 15 seconds faster than her closest competitor, Martins Ferry’s Kayla Fogle.

She was the favorite in that race, as well as the 100 breast, which turned out to be a memorable one for her. Her time of 1:06.52 established a pool mark and left banks speechless as she reached the finish.

“She won the 200 IM also,” Banks said, “but then she came back at the end of the day to beat the pool record.

“It will be neat to see a St. Clairsville High School name — a freshman — on the university pool record board.”

The Red Devil girls won three relays. The 200 medley team of Moyer, DiBetta, McKeegan and Marody finished with a time of 1:56.19, the 200 free foursome of Brenna Planey, Caroline Smith, Ellie Thomas and McKeegan won with a time of 1:51.6, and the DiBetta, Planey, Moyer and Marody brought the 400 free team home in 3:57.21.

“Between Ethan, Matthew and Nate; those three boys are making me think of who I need to put in OVACs because I kind of put them in off events (Saturday) and was surprised at how well they did,” Banks said. “Those guys and Adam Balcar have been working extremely hard this year and I think are really going to do some things.”