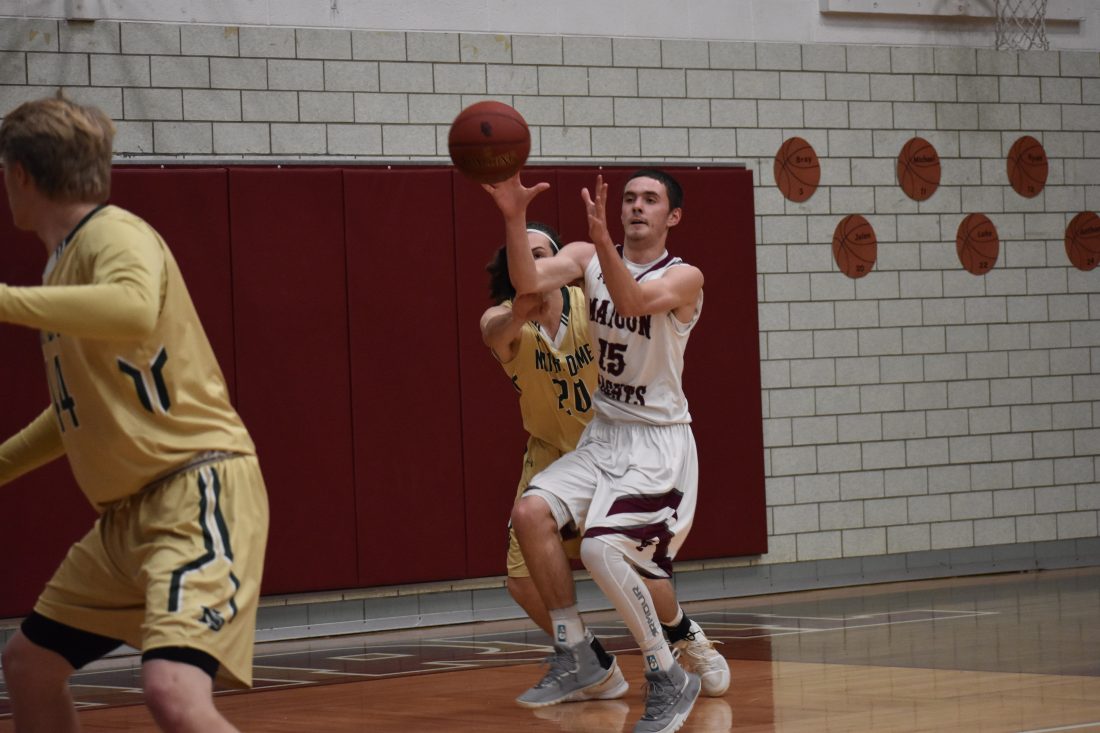 Photo by Kyle Lutz Wheeling Central’s J.C. Maxwell gets ready to catch a pass under the bucket while Notre Dame’s Elias Gordon defends during Friday’s game.

WHEELING — Notre Dame boys’ coach Jarrod West had a moment of Deja Vu during the final seconds of Friday’s game against Wheeling Central.

Down by three with 27 seconds to go, the Maroon Knights inbounded the ball from half court and from there, they had multiple opportunities to tie the game as they secured offensive rebound after offensive rebound.

The buzzer sounded on the fourth 3-point attempt, but the ball did not fall and the Irish emerged with a 66-63 victory.

During last year’s contest, the Irish left the Friendly City with a 60-59 victory over the Maroon Knights after a layup attempt at the buzzer rung around the rim and went out.

“And all the games seem to be like that,” West said. “We’re trying to get on that (Central) level to compete and be recognized as one of the top-tier. This is the top program in the state, in my opinion. To come back-to-back years and get a win and how we got them, it’s huge for us moving forward. It was a great atmosphere and a great game for sure.”

Notre Dame faced an early deficit as the Wheeling Central defense gave it some fits while led by as many as 11 on a couple of occasions.

However, the Irish scored the final five points of the third to get within one, 49-48. That transitioned to an 11-0 run where they took the lead for good.

A bucket by Elijah Goodman capped the spurt with 5:28 left.

The Maroon Knights scored six of the next eight points to get within one, 56-55, but couldn’t get over the hump as freshman Jaidyn West buried a 3-pointer — his fourth — to make it a two-possession contest with 2:33 left.

“We got the lead and they made some plays. I think we got to get a little better at our decision-making when we got the lead. We forced a couple of shots. When we did what we wanted to do, we did pretty well, but to their credit they kept the ball in their guys’ hands they knew they needed to have the ball at the end.

“I was proud of the effort. I thought we played hard against a very good team and we’ll get better from it.”

The Maroon Knights were able to get within two on two separate occasions down the stretch, but couldn’t convert.

Anthony Robbins led the way for the Maroon Knights with 23 points while Ryan Reasbeck tallied 15 and J.C. Maxwell had 14.

“He’s played well for us and we need that,” Stephens said of Robbins. “He’s got to be a leader for us because we have some younger guys out there. I’m proud of him. Him and Clayton (Abate) battled their big guys inside.

”Bray (Price) and Jalen (Creighton) did a very good job on the (Gabe) Zummo kid. He made some plays at the end, but I think he only ended with 13 points, which is probably way below his average. They were just able to make a couple of plays at the end.”

In the third quarter, a Robbins bucket put the score at 42-32 in favor of Wheeling Central with 4:23 left, but that’s when Jaidyn West caught fire for the Irish.

The freshman buried a 3-pointer — his first — to cut the deficit to single digits.

West was feeling the heat as he hit two more shots from behind the arc in a span of 24 seconds to cut it to 42-41.

However, Wheeling Central stopped the bleeding with a freshman of its own in Reasbeck, who pocketed a 3-pointer to put the lead back to four.

“Both of those guys are very good players,” Stephens said. “They’re going to be good players in years to come, too.”

Three Irish players scored in double figures as Jaidyn West had a team-high 21 points while Tyler Hardesty had 14.

“The good thing is, the first part of our schedule is we’ve been on the road a lot,” Jarrod West said. “So, we’ll catch all those guys on the backside, but they’ll be at our place. Southern Garrett, Md., was a very big win. I don’t now if many people know about their program, but they’re very good.

”We went there and won, Parkersburg Catholic, Trinity and Central. Have four wins like that on the road. Especially this year, Trinity is knocking on the door, Central is the big, bad wolf.

”To beat those two guys on their floor is huge for us. Now we got to keep the momentum going and keep grinding. It doesn’t get any easier.”

A pair of free throws by Zummo with 6:53 in the fourth quarter gave Notre Dame the lead for the first time since the first quarter.

“We talked about this before the game,” Stephens said. “It’s a big game as far state-wide, but it’s still only Game 9 of 22 regular-season games. We kind of have to keep it in perspective.

”We want to learn from it and get better. We’ll get another shot at them in a month or so, but we don’t want this one to carry over. We want the good things we did as far as the effort as far as that to the Linsly game.”