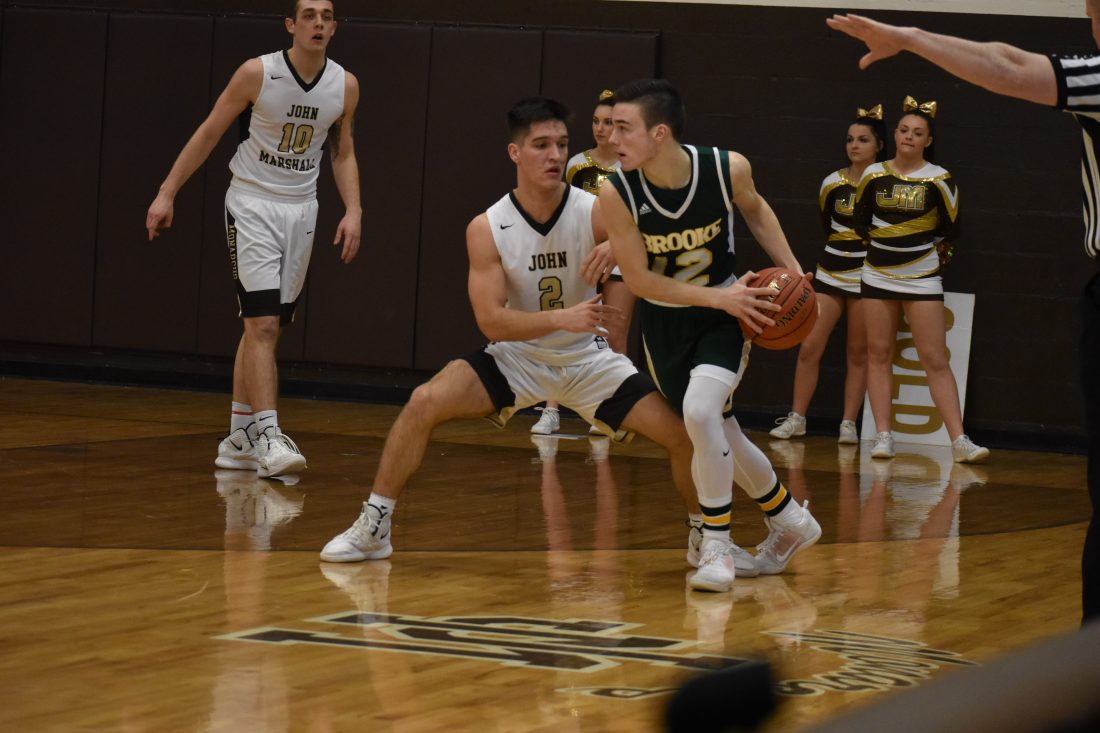 A blowout anyway you slice it. But for the first 16 minutes, it was anything but.

Struggling Brooke led after one quarter and was down three at halftime.

But the second half was all Monarchs, including a 15-0 run in the third quarter that broke it open as they cruised to a W.Va. Class AAA Region One, Section One semifinal victory Friday at the John Marshall Field House.

With a victory, John Marshall will travel to Wheeling Park for a 7 p.m. Friday showdown for the sectional title. The winner will host a Regional Co-Final the following Tuesday, while the loser hits the road.

“We will give you 16 minutes and give the other team 16 minutes. That is usually what happens with us,” John Marshall coach Chad Clutter joked. “Hopefully we won’t repeat that pattern on Friday. I know they are excited to get to that game.

“We played well up at Wheeling Park the last three years and I know they aren’t going to take us lightly.

“Tale of two halves. We decided they weren’t going to face cut us anymore. Second half we went half-court man and let’s get our offense going. We got an eight-, 10-point lead and it just deflated (Brooke).”

Gage Yost hit a jumper to cut the Brooke deficit to 38-34 early in the third.

Mickey Reilly got things started with a 3-pointer, followed by back-to-back baskets by Isaac Babiczuk. Tyler Sadoski hit a floater and then knocked down two free throws.

A basket by Bryce Yoho and two free throws from Derrick Derrow made it 53-34 in favor of the Monarchs before Brooke’s Logan Williams scored on a layup right before the third-quarter buzzer to stop the bleeding.

“We owned the boards,” Clutter said of the key component to the run. “(Brooke) missed some shots. We did a better job of running our lanes and we got a few assists out of that. Somebody either got all the way to the basket or we got a couple nice passes out of that.”

Brooke coach Mel Coleman could do nothing but shake his head.

“They gave up and I can’t explain why,” Coleman said. “The game plan was in place and you have to have heart and determination to be successful. We just didn’t try hard enough.

“All you have to do is play good defense and execute and we didn’t do that. Why? You are three points down and you give up a 15-0 run? That means no heart and determination and no focus. We should have been up at halftime. Little things are important and we didn’t do the things we were supposed to do.”

Things didn’t get much better for the Bruins in the fourth quarter.

John Marshall was extremely balanced all game — the Monarchs bench outscored Brooke’s bench, 16-0. Until the fourth quarter, only Adam Miller and Yoho were in double figures, each with 10.

But Yoho took over during the final eight minutes.

He knocked down five field goals — including a 3-pointer — to lead to a game-high 22 points and 10 rebounds. Tyler Sadoski added 11 points as everyone got in and all but three players scored.

John Marshall outscored Brooke, 43-16, in the second half.

“This was similar to the St. Clairsville game we had,” Clutter said. “Babiczuk came in and got (five) points, Ryan Campbell went in and played good defense, got us a couple rebounds. Devin Norris bring us energy. We are a mixture of people and the guys on the floor give me everything they got.”