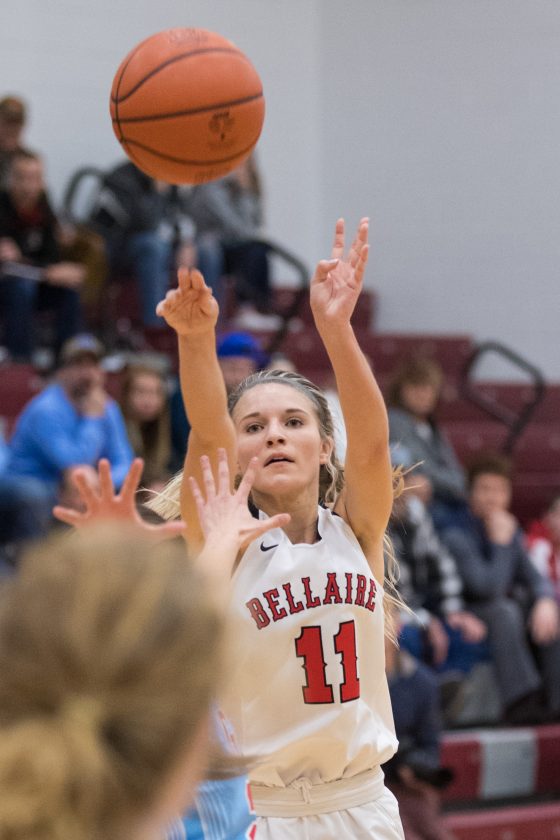 NEW CONCORD — Bellaire’s recipe for success all season has consisted of a suffocating defense sprinkled with a dash of balanced offense.

That winning formula worked again Tuesday night, as the Big Reds slayed one of the district’s storied programs on a big stage.

Led by 18 points each from seniors Maci Crozier and and Natalie Stoner, Bellaire rolled to a 54-27 victory against Garaway in an Ohio Division III East 2 district girls’ basketball semifinal inside John Glenn High School.

The triumph avenges a 54-28 loss at the hands of the Pirates at the same stage last season and puts the Big Reds in Saturday’s district championship game opposite Morgan. The Raiders topped Tusky Valley, 44-40, in the other semifinal. Tipoff is set for 2 p.m. at Meadowbrook High School. The winner advances to the Logan regional.

“A lot of our players started early in their career and they have taken a step forward every year,” Bellaire coach John Farrier said of his team, now 22-3. “It’s a slow process sometimes, but the fruits of their labors are showing. They’ve worked hard and they’ve had to go through the trials and tribulations.”

“In our 21 wins previously, we had started off really well,” Farrier said. “And in our three losses, we had a really bad first quarter.

“That was the key. I think we came out and asserted our will. I think our girls just started to think ‘Hey, we can do this.’ We knew about Garaway. They have a storied program and they whipped us last year. That was in the back of our heads. But once we came out and played the way we’re capable of playing, we knew we could do this.”

The Pirates cut Bellaire’s lead to five at the end of the first quarter, but the Big Reds won the second period, 21-6, starting with a 10-0 run that took the first 2:18 of the quarter. Crozier hit a jumper off a turnover, followed by one of four 3s by Stoner. Michaela Flaherty, who finished with nine points, capped the surge, scoring off an offensive rebound.

Bellaire’s experience showed in the second quarter, and Farrier was hopeful that would make a difference this time around vs. the Pirates.

“Their weakness is they’re kind of youthful at the guards,” he said. “Last year, they had three really good guards. This group they have is going to be really good, but a few are young. So, we were kind of hoping we could pressure them.”

The strategy paid off time and again, as the Big Reds benefited from Garaway miscues. Bellaire was strong on the boards, earning three, and sometimes, four opportunities on possessions.

“We wanted to be aggressive on the boards, and were definitely that during the first half,” Farrier said.

Bellaire built a 21-point lead in the third and, even though they only scored six points in the quarter, it held Garaway to seven, limiting any damage.

“I think we’re pretty adept at playing half-court defense,” Farrier said. “That’s one of the things we’ve really worked on.”

Kallie Regula paced the Pirates with 11 points. She scored all of them in the first half.

“We’re excited about this because it’s kind of a statement win,” Farrier said. “Garaway is a heckuva program. The coach (Dave Shutt) is a legendary coach.

“To get a win like this, we’re happy. But like I told the girls, they should be proud of themselves and proud they put a lot of work in, but there’s still some games out there to be won.”

Fort Frye went on a 15-2 run down the stretch to earn a date with Shadyside on Saturday.

Lauren Flannery paced the Pilots (20-5) with 23 points in her final prep game.

CLAYMONT — Union Local was outscored 25-4 in the first quarter and was no match for Hiland.

Allison Loase was the leading scorer for the Jets with eight.