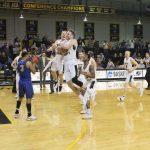 WEST LIBERTY — Although they already had a share of the Mountain East Conference regular season title, one thing was certain — Coach Ben Howlett and his West Liberty men’s basketball team wanted it all to themselves.

And what a way to win it outright.

Down 98-96 to Notre Dame after Will Vorhees hit a jumper with 5.2 remaining, senior Eric Meininger answered as he sank a 3-pointer with .9 remaining to defeat the Falcons, 99-98, on Wednesday night at the ASRC.

This is the second straight regular season conference championship for the Hilltoppers.

“When we lost to Charleston, the next day we came in and said we didn’t want to share it with anybody,” Howlett said. “We want to win this outright, and said we’re going to have a four-game tournament with the four games on our schedule. We got three of them out of the way, now we’re going to go down the hill and play our beloved rivals and see if we can get a win down there.

“I’m really proud of our guys and I thought we battled hard. The shot that Eric made, was a senior making a play. He didn’t want to lose, he put the team on his back and made a very clutch shot.”

Meininger finished with a team-high 21 points for the Hilltoppers (23-3, 19-2 MEC) and eight rebounds. His clutch shot was his second 3-pointer on the contest, but as soon as he let the ball go, the senior felt confident in his shot.

“My emotions are still going crazy,” Meininger said. “I just launched it up there and right when it left my hands, it felt good. That’s something I’m going to remember my whole life. I’m just thankful it went in.”

Vorhees was able to catch the ball right around the perimeter and put up a shot. The attempt was on line, but fell short and West Liberty busted out the champions T-shirts.

“I’ll be honest with you, I thought that shot he shot at the end was going in,” Howlett said. “From my angle, it was right on line, it was just short. Obviously I’m glad he missed it, but I think he’s going to go down as one of the best players in Mountain East history.”

Vorhees finished the night with a game-high 30 points and grabbed 13 rebounds to complete the double-double. He also played all 40 minutes. However, the Hilltoppers didn’t make it easy on him.

Howlett thought, both Meininger and Marlon Moore Jr. did what they were supposed to do to make him earn everything.

“I think anybody who plays 40 minutes is going to be exhausted,” Howlett said. “When your 6-(foot)-8 and 260, you’re really going to be exhausted. That was part of our game plan when they break our press, he’s involved in that. We wanted to put a lot of pressure on him when he has the ball and make him dribble. Just everything we could do to make him tired, we’re going to try and do it.”

West Liberty took a four-point lead with 2:33 left to go in the contest after a pair of Dalton Bolon free throws to put the score at 95-91.

Notre Dame, though answered thanks to a Vorhees coventional three-point play to tie the game at 94-94. The Falcons took the lead thanks to a pair of Bruce Hodges free throws.

Brady Arnold then went to the line with 25.8 seconds remaining to tie the game again at 96-96.

“Give Notre Dame a lot of credit,” Howlett said. “They’ve got one of the best players in the country, who is obviously a handful. We’re very lucky to get a win, but I’m really proud of the guys the way we played because I thought we played extremely hard for 40 minutes. I told them during shootaround that it’s going to be a 40-minute war out there.”

Dalton Bolon and Moore both netted 18 points for the Hilltoppers while Yahel Hill went for 14.

For the Falcons, Drew Scarberry totaled 29 points as he went 8 of 14 from behind the 3-point arc and Larenz Thurman contributed with 23.