Fort Frye up next for Shadyside 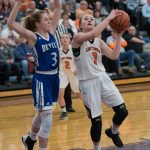 MARTINS FERRY — For the first time since 2012, Shadyside finds itself on the brink of the ‘Sweet 16.’

Getting to this point wasn’t easy and Tigers coach Serge Gentile realizes what lies ahead won’t be easy either.

Shadyside fought off a strong challenge from a solid Beallsville squad in front of a near capacity crowd inside the Tolbert Gymnasium at Martins Ferry High School in the Division IV Eastern District semifinal to pull out a 50-43 victory.

“It’s the tournament and (games) are supposed to be like this at this point of the season,” a relieved Gentile said. “I am really excited for these girls for everything they’ve been through and the work they’ve put in. We’ll see what happens.”

What happens next is a date with a disciplined and well-coached Fort Frye outfit, which took out River in the other district semifinal. That game will be played Saturday at a site to be determined by the Eastern District Board.

“We have to play another really good team that’s going to be physical with us and we’ll have to go earn it if we want a district championship,” Gentile said. “It’s going to be a possession-by-possession battle. We’ll probably have to find a way to will ourselves to a win.”

That was basically the recipe against the Blue Devils, who brought nearly the entire community and school with them to Belmont County.

“Thankfully, we did have that (12-point) lead because it felt like we went a long time without scoring late in the second throughout much of the third quarter,” Gentile said.

Shadyside, which didn’t record a two-point goal in the third, was outscored, 16-8 in the quarter. Beallsville made a concerted effort to go inside where it had a size advantage with talented junior Ashley Howell. She scored seven of her team-high 17 in the quarter.

The Tigers started the fourth with a 3-pointer from sophomore Baylee Wach. Howell answered with a bucket, but it proved to be as close as the Devils got the remainder of the game.

“We stopped being aggressive (in the fourth),” Beallsville coach Tori Jarrett said. “Our offense was working great and (Shadyside) couldn’t figure it out. We stopped attacking off of it, started being passive and that’s when things started to go downhill for us.”

Shadyside couldn’t totally put the game away because of its free-throw struggles. It knocked down just 6 of 11 in the fourth quarter. However, Beallsville couldn’t capitalize.

“There were a lot of ups and downs and I guess we weren’t on the up enough,” Jarrett said.

Jaycee Mayeres, who was in foul trouble most of the night, had a clutch basket and two free throws in the fourth. Sophomore Tory Hendershot, who finished with 10 points, also had four in the fourth.

“We didn’t shoot the ball well, but give Beallsville credit for that because they have some girls in the lane who give us problems with their height and size,” Gentile said. “We found a way to grind it out. We won the game with defense and rebounding, which are the biggest keys this time of the year.”

Wach’s production was backed by senior Syd Destifanes. The Tigers’ catalyst scored 11 points, including eight in the second period when Shadyside stretched it out. Wach and Hendershot finished with seven and six rebounds, respectively.

Though the season comes to an end for the Blue Devils, they won the OVAC 1A title and won their first tournament games in nine seasons. Plus, they’ll return four of five starters in 2019-20.

Howell’s production, which included 10 rebounds, was complemented by Jaydn Gabel’s 10. Junior point guard Ashlie Louden put forth a solid floor game, but she was limited to just four points.