Three-game run comes to an end 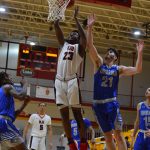 WHEELING — All winning streaks eventually come to an end.

Despite the setback, the Cardinals appear to have nailed down a berth in next week’s Mountain East Conference Tournament at WesBanco Arena. That was an unlikely occurrence after the Redbirds dropped their first 10 contests.

However, a move to an all-freshmen starting lineup over the last month has yielded success. Jesuit has won six of its last eight starts to improve to 8-19 overall and 7-14 in the MEC.

Urbana pounced on the hosts at the outset and continued to have its own way through halftime, taking a 52-36 lead in intermission.

Jesuit, to its credit, scrapped back to knot matters at 85-85 with just under four minutes to play on two free throws by DeAndre Robinson.

The Blue Knights were able to stem the tide on the strength of some superb shooting, gaining on a 94-90 edge with 20 seconds showing. The Cardinals’ Franck Kamgain buried a trey with 3.4 ticks showing to make it a 94-93 lighting. Jesuit was forced to foul, sending Datrey Long to the line with 1.6 seconds showing. He made the first, missed the second before a length of the court Cardinals prayer went unanswered.

Jesuit never led in the contest.

“We did not come to play. That was an ugly first half,” Peckinpaugh said. “Urbana is a better team than its record would indicate. They beat Fairmont State at Fairmont. That is no easy task.

“(Wednesday) is disappointing. We have really played well as of late. Our young kids are really growing up. But when we were 0-10 making the tournament wasn’t on the radar. So in that regard, I am happy with the growth of this team and what the future holds. Now we must get ready for West Liberty Saturday.”

Robinson produced 18 points while Emmanuel Ansong delivered 12 points and back-to-back thunderous dunks that ignited the Cardinals rally midway through the second half.

Sweet-shooting Ethan Snapp led the Blue Knights with 22 points while Malik Jacobs dropped in 21. The winners shot 51 percent from the floor.

“We really shot the ball well, especially in the first half. We had to hold on at the end. Jesuit made a great run,” Urbana first-year coach Nick Dials said. “This is a nice win. We realize how well Jesuit has been playing.”

The Jesuit women, like their male counterparts, dug a huge first-half hole, trailing 45-28 at halftime.

Senior forward Chenelle Moore led the way for the Cardinals with a double-double — 17 points and 15 rebounds. She also dished out a team-best four assists.

Sylvia Hudson sparked Urbana with 33 points and 17 rebounds. Sa’dera Johnson tossed in 22 counters for the Blue Knights to go with seven rebounds.

The Cardinals host rival West Liberty on Saturday in a 2 p.m. start.