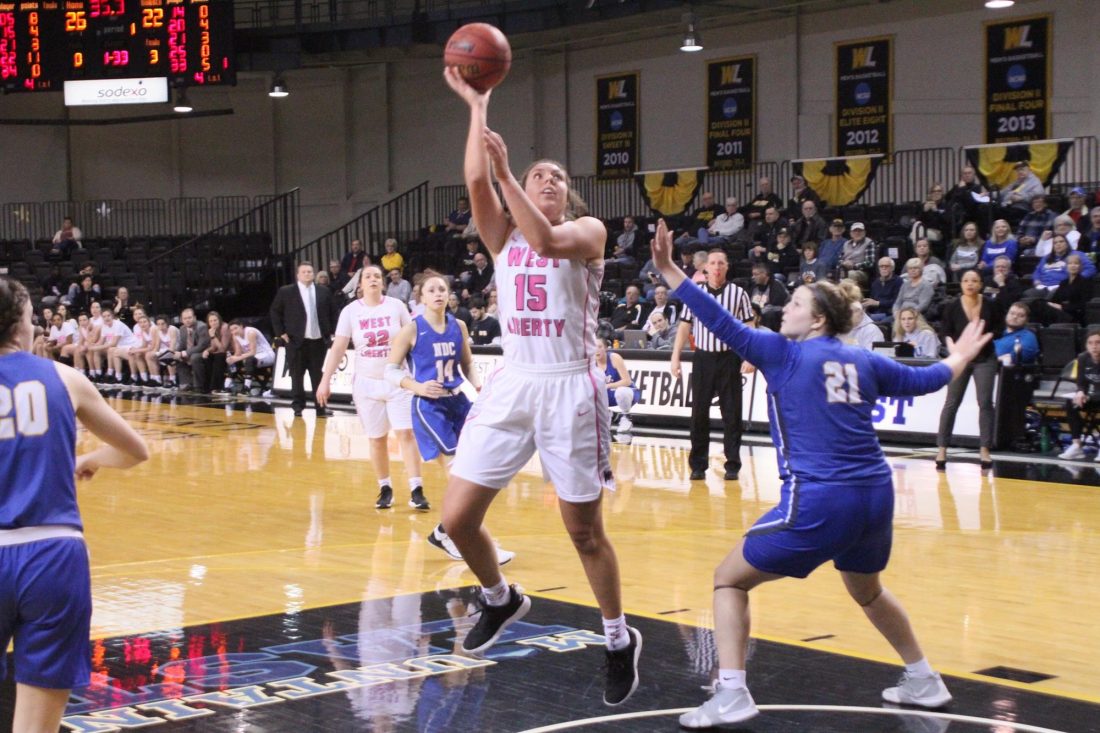 WEST LIBERTY — On occasions when one team is playing its game up to a T, adversity can come and take a nice bite.

Up by as many as 18 in the first half, the Hilltoppers saw their lead slip away. Audrey Tingle, hit two big free throws to send the game into overtime and Marissa Brown totaled 31 points and 24 rebounds as West Liberty prevailed, 107-92.

“First off, hats off to (Lauren Macer) and Notre Dame, her staff and her players,î” West Liberty coach Kyle Cooper said. “Down whatever it was, to fight back in that situation on the road. That takes heart and that shows what that program is built on. She’s done a phenomenal job there. I’m unbelievably proud of this group.”

It was something where we hit adversity in the second half and we’ve talked about it all year.

“The amount of growth for this group and the fact that we can hold on to that, especially down under two minutes, I’m just unbelievably proud of these kids.”

Tingleís free throws came after the sophomore missed two with 1:41 left in the game. In fact, the Hilltoppers struggled from the foul line down the stretch in the fourth quarter as they missed six in a row, including a pair with 1:06 left on the clock when they trailed, 87-85.

“And you’re talking about a player who struggled from the free-throw line her whole career,” Cooper said of Tingle. “I think it just goes to show that this team has embraced so much when we’ve shifted into the team we’ve become and the team that’s now won 19 games this year. But I think the thing you see more than anything is the level of confidence within each other and the grit that we developed. Audrey, at the beginning of the year, I don’t know if she hits those, but I knew she was going to hit those at the end of the game. I felt very good about it.”

The Hilltoppers scored the first five points of the extra period and never looked back. After Seina Adachi went 1 of 2 for Notre Dame, West Liberty tallied the final 10 points. A Morgan Brunner 3-pointer with 2:36 left caused the spark.

Four Hilltoppers scored in double figures with Brown leading the way. Taylor Johnson compiled 25 points going 4 of 5 from behind the 3-point arc, while Brunner netted 19. Tingle tallied 15 points and dished out eight assists.

Something the Hilltoppers have done all year, the assists is one aspect that will always put a smile on Cooperís face. The Hilltoppers issued 23 assists on 36 baskets. They also started the game going 4 of 4 from the field, all of which came from assists.

ìIt’s amazing how much when we get in the flows of the game where you see us scoring in bunches, it all stems of sharing the ball,” Cooper said. “And we lost ourselves a little bit in the second half where we started dribbling the ball too much. They got up and pressured us. The honest to God truth, it’s just love for each other. You got to want to make the play for your teammate and not yourself. That’s who these kids are.”

After an Adachi bucket with 7:22 left in the second quarter, the Hilltoppers scored 15 of the next 17 points to take a commanding 47-31 lead.

The lead blossomed to 18 after a pair of Brunner free throws with 1:06 left in the second quarter as the score read 59-41.

However, the Falcons refused to fold and started to mount their comeback in the third quarter.

A Kyleigh Ramlow bucket sparked a 9-0 run that last about two minutes to get Notre Dame within striking distance, 67-61 with 3:42 left in the third.

A Johnson 3-pointer stopped the West Liberty drought, however, the Falcons scored 8 of the next 11 points to put the score at 73-69.

Notre Dame took its first lead since 6:07 left in the first in the fourth quarter thanks to a 18-3 spurt that put the score at 88-85 with 40 seconds to play.

Adachi paced the Falcons with 26 points while Jada Marone had 17. Ramlow netted 12 points and Katie Karalic secured 11 to round out the double figure scorers.