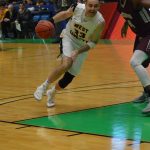 Photo by Kyle Lutz Eric Meininger and West Liberty will open the Atlantic Regional Tournament against East Stroudsburg on Saturday. Tipoff is scheduled for 2:30 p.m.

“Obviously it’s a credit to good players,”î Howlett said about West Liberty making it to the tournament. “And we’ve had a lot of good players here in the past. Hopefully this thing can continue to go. It’s tough to make the NCAA Tournament one year, but to do it 10 years in a row, its really, truly something special. But we’re not going to feel good about that because we got our hands full here on Saturday.”

The Hilltoppers (26-4) certainly do as they will face off against No. 7 seed East Stroudsburg at 2:30 p.m. at Indiana University of Pennsylvania.

The Warriors (21-7) are coming off a 67-64 Pennsylvania State Athletic Conference Tournament semifinal loss to Mercyhurst. The loss broke a 10-game winning steak for East Stroudsburg.

“It’s kind of funny, it’s kind of like a mirror image of ourselves when watching them on films,” Howlett said of the Warriors.

“They do play extremely up tempo, they press after makes and misses and they’ve got a lot of interchangeable players that can play multiple positions on offense. I think it will be a fun game, especially for the crowd because I think it will be an up and down type of game. I think a lot of points could be scored.”

The Hilltoppers and Warriors have a little bit of a history in the Atlantic Regional Tournament. The last time the two teams faced each other was during the 2013-14 season in the championship game. The Hilltoppers, who were the No. 2 seed that year knocked off the top seed and host Warriors, 89-82 to secure spot in the Elite Eight.

They also met during the 2011-12 season in the opening round where West Liberty prevailed 119-82.

“Obviously they present a little bit of a challenge because they do have two bigger guys on their roster,” Howlett said. “One in 6-(foot)-10 Ryan Smith who was PSAC East Freshman of the Year and Josh Williams who was a Division I transfer at 6-7. Those two guys really present a challenge for us.”

Williams is the team’s leading scorer as he is averaging over 16 points per game (16.7) while Smith is not too far behind tallying 16.4 per contest.

West Liberty, however, is ready for the challenge and is also looking forward to facing an opponent it haven’t face before this season.

“I think our guys and myself included would rather play someone we haven’t played against,” Howlett said. “I think that’s what makes the NCAA Tournament fun. Other than playing a team in the first round you have played twice already or maybe even three times in the regular season. You kind of want to matchup with somebody in a different league and kind of see what they’re about.

“Hopefully they’re not used to someone playing as fast as they. We can kind of shock them a little bit.”

West Liberty is coming off a 100-96 loss to Notre Dame in the Mountain East Conference Tournament Championship. After the game, Howlett made it a point to his team, they’re season was not done yet.

“That was kind of the message this week,” Howlett said. “Just because we have a sour taste in our mouth, a lot of programs don’t have a chance to go out and play another game after a loss in the conference tournament. Fortunately for us, we do. I think it’s something our seniors really want to get. They want to win this regional title and they’ve done that here before in the past.

“I think once you get to this point in the season in the NCAA Tournament, every team you play is good. You’re not going to play any game where you can play an average game and expect to win. In order for us to win or any other team to win, you have to play well.

“I think the week of preparation we had after Notre Dame, has been really good. We went really hard in practice on Tuesday and Wednesday. Thursday will obviously be a lighter day and (Friday) will be game prep for Saturday. I think this week has been really good for us. I think it kind of gave us a chance to rest a little bit . I think that was one of the most important things was for our guys to rest a little bit because a lot of them played a lot of minutes in the Mountain East Conference Tournament. I think this rest gave us a chance to heal up, so I think this week has been great for us.”