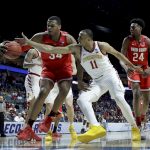 Iowa State's Talen Horton-Tucker (11) tries to steal the ball from Ohio State's Kaleb Wesson (34) during the first half of a first round men's college basketball game in the NCAA Tournament Friday, March 22, 2019, in Tulsa, Okla. (AP Photo/Charlie Riedel)

TULSA, Okla. (AP) — Ohio State went from barely making the NCAA Tournament to a spot in the second round with a 62-59 upset of sixth-seeded Iowa State in the Midwest Region on Friday night.

Iowa State (23-12) led just once in the second half but had a chance to send the game into overtime when Nick Weiler-Babb had an open attempt at a game-tying 3. His shot missed and ended the season for the Cyclones, who won the Big 12 Tournament to earn a spot in the NCAAs.

Ohio State led 26-24 at halftime and started to gain momentum in the early minutes of the second half. Woods threw up a lob to Jallow for a dunk that put the Buckeyes up 38-32 with 14 minutes to play.

Iowa State caught a much-needed break when Wigginton was fouled on a 3-pointer. He made the free throw to cut Ohio State’s lead to 44-42. Shayok’s mid-range jumper finally put Iowa State up 54-53, but Ohio State answered quickly. Woods’ corner three put the Buckeyes up 58-54.

Wesson missed a free throw with Ohio State up three and 10 seconds remaining to set up the final sequence.

Ohio State: The Buckeyes slowed the game down and turned it into a Big Ten-style bruise fest. The officials were lenient, which played into the hands of Ohio State’s 6-foot-9, 270-pound Wesson.

Iowa State: The Cyclones fell back into some of their inconsistency — they entered the tournament having won just three of their previous six games.

COLUMBUS, Ohio (AP) — North Carolina completed a perfect first round for top seeds in this NCAA Tournament, but not before Iona became the latest No. 16 seed to show these matchups are no sure thing.

The Tar Heels (28-6), who came into the tournament as a top seed for a record 17th time, advanced to play Washington in the second round of the Midwest Region on Sunday. They’re hoping to reach their 11th Final Four.

Much like Gardner-Webb did earlier Friday against No. 1 seed Virginia — which last year became the first top seed to lose in the first round — Iona surprised the Tar Heels early with their energy and outside shooting. Ricky McGill made all four of his 3-point attempts in the opening half as the Gaels (17-16) led by as many as eight and took a 38-33 lead into halftime.

Iona’s advantage disappeared quickly. Johnson’s 3-pointer and Luke Maye’s jumper tied it 39 seconds into the second half, and an 18-4 run put North Carolina back on track.

The bigger and stronger Tar Heels dominated the boards, outrebounding Iona 52-26 and getting 25 second-chance points. After shooting 44.3 percent the first half, they hit 63 percent in the second and led by as many as 20 points.

McGill finished with 26 points, including 7-for-9 shooting from beyond the arc for the Metro Atlantic Athletic Conference champion Gaels, who are one-and-done in the tournament for the fourth straight season. They’re still seeking their first NCAA win after 13 trips.

Asante Gist had 17 points and Andrija Ristanovic scored 11 for Iona.

Iona: The Gaels hit 10 of 21 3-point tries in the first half but managed just five more on 20 tries the rest of the way. They couldn’t overcome the missed shots as they were beaten up on the boards.

North Carolina: The Tar Heels won’t have the luxury of playing as poorly as they did in the first half if they want to make a deep tournament run.

North Carolina plays Washington in next round.