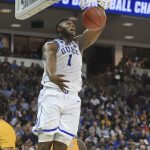 RJ Barrett led Duke (31-5) with 26 points and 14 rebounds and combined with Williamson for a prolific showing for the freshman stars. But it was Williamson who could not be contained in the second half, and he turned a tight early contest into a Duke runaway in the first round of the East Region.

Duke led just 31-27 at halftime, but Williamson opened the second half by driving on two defenders for a layup that drew a foul. He missed the free throw but slammed home the rebound, and his layup moments later gave the Blue Devils a 40-27 lead.

SAN JOSE, Calif. (AP) — Caleb Homesley scored 22 of his 30 points in the second half and Lovell Cabbil hit a go-ahead 3-pointer with 1:16 to play to send 12th-seeded Liberty to the first NCAA Tournament win in school history.

Homesley helped rally Liberty from a 10-point deficit in the second half by scoring 14 points in a span of less than five minutes. Cabbil’s 3 gave the Flames the lead for good, 72-70, and Liberty did the rest at the foul line to spoil the first tournament trip for Mississippi State (23-11) in a decade.

The Ducks (24-12) won four games in four days to win the Pac-12 tournament last week just to make the NCAAs then followed it with an impressive victory over a higher-seeded opponent. Oregon advanced to play No. 13 seed UC Irvine (31-5) on Sunday in the second round of the South Region.

Louis King added 17 points, Paul White scored all 14 points of his points in the second half and Wooten had nine points, six rebounds and the tone-setting blocks to give the Ducks their ninth straight win.

Ethan Happ and Khalil Iverson each scored 14 points to lead the Badgers (23-11).

COLUMBIA, S.C. (AP) — No. 1 seed Virginia rallied from 14 points down to beat No. 16 seed Gardner-Webb and avert another first-round exit as a top seed in the NCAA Tournament.

The Cavaliers trailed 30-16 with 6:42 left in the first half of the South Region opener but rallied and cut the Runnin’ Bulldogs (23-12) lead to six at halftime.

Virginia (30-3) then opened the second half with a 25-5 run to put to rest any thoughts of an upset. The Cavaliers used their trademark stifling defense to force 11 Gardner-Webb turnovers in the first 12 minutes after the break.

De’Andre Hunter led the Cavaliers with 23 points and Mamadi Diakite added 17 points on 8-of-10 shooting and nine rebounds.

Jose Perez scored 19 points for Gardner-Webb, which was playing in its first NCAA Tournament.

Last year the Cavaliers were the top seed in the tournament and lost by 20 to No. 16 seed Maryland Baltimore County.

COLUMBUS, Ohio (AP) — Admiral Schofield had 19 points and No. 2 seed Tennessee held off a second-half rally by No. 15 seed Colgate in the opening round.

The Raiders (24-11) erased most of Tennessee’s 42-30 halftime lead with an 11-2 run, tied the score midway through the second half, and kept the game close after that.

Schofield hit back-to-back 3-pointers to give Tennessee a cushion with 45 seconds left.

Jordan Burns had 32 points for Colgate, which played much of the game without leading scorer Rapolas Ivanauskas because of eye problems.

TULSA, Okla. (AP) — Jeremy Harris and Nick Perkins each scored 21 points and had 10 rebounds to help lead No. 6 seed Buffalo past No. 11 Arizona State in the West Region.

CJ Massinburg had 18 points and six rebounds for Buffalo (32-3), which won its 13th straight game.

Zylan Cheatham scored 22 points and had eight rebounds before fouling out with 2:06 remaining for Arizona State (23-11). Romello White and Luguentz Dort each added 12 points.

Arizona State trailed 44-31 at halftime and pulled within nine early in the second half before Buffalo’s 7-0 run pushed its lead to 16 with 16:13 remaining. The Bulls’ advantage never fell below 14 the rest of the way.

Leonard and Max Hazzard each scored 19 points to send UC Irvine (31-5) into the second round of the South Region.

One year after making a run to the Elite Eight, the fourth-seeded Wildcats (25-9) had a short stay in the tournament as they struggled to decipher the Anteaters zone defense and missed star forward Dean Wade, who was sidelined by a foot injury.

COLUMBUS, Ohio (AP) — Noah Dickerson had 20 points and 12 rebounds, and ninth-seeded Washington made a successful return to the NCAA Tournament for the first time in eight years.

Eighth-seeded Utah State (28-7) had won 10 in a row and 17 of 18 while taking the Mountain West title. The Aggies got the highest seed in school history and were trying to end their own long NCAA Tournament drought — they haven’t won since 2002.

TULSA, Okla. (AP) — Jarrett Culver had 29 points, eight rebounds and seven assists to help No. 3 seed Texas Tech shake off a slow start against No. 14 seed Northern Kentucky in the first round.

Northern Kentucky (26-9) got 23 points from Tyler Sharpe and 11 from Dantez Walton while giving the Red Raiders everything they could handle in the West Region.

COLUMBIA, S.C. (AP) — Rashard Odomes and Christian James scored 20 points apiece, Kristian Doolittle had 19 points and matched a career-high with 15 rebounds and No. 9 seed Oklahoma blitzed Mississippi with a season high in points in the first round.

The Rebels (20-13) had looked like a tired team for more than a month, and eight days off didn’t appear to help. Terrence Davis led Ole Miss with 17 points.

COLUMBUS, Ohio (AP) — Luka Garza scored 20 points, Jordan Bohannon made a three-point play during Iowa’s closing surge as the 10th-seeded Hawkeyes rallied past No. 7 seed Cincinnati in the first round.

The Hawkeyes (23-11) got their first NCAA Tournament win in four years despite what amounted to a home crowd for the Bearcats, who couldn’t overcome a subpar game by Jarron Cumberland. He was 3 of 9 from beyond the arc and finished with 18 points.

Point guard Justin Jenifer scored a career-high 19 points for Cincinnati (28-7), which hasn’t made it past the opening weekend for seven straight years.

Houston rolled to a 15-3 lead in the first five minutes and the rout was on.