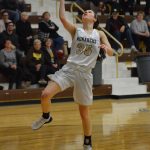 Photo by Cody Tomer John Marshall senior Shay Straughn delivered a strong campaign to finish her stellar career with the Monarchs. Her performance on the hardwood did not go unnoticed as she collected first-team all-state honors.

CHARLESTON — A special senior season for Shay Straughn may be over but the honors continue to roll in for the Monarchs’ top scorer.

Straughn was named to the all-state first team as chosen by the West Virginia Sports Writers Association.

The JM guard wrapped up her final campaign averaging 24.2 points per game with 5.1 steals per game and 4.7 rebounds per game under coach Brock Melko.

Straughn also joined her father (Shawn) and borther (Taylor) in the 1,000-point club this year.

For Wheeling Park, junior Shanley Woods highlights the all-state second team after leading her squad to the state tournament.

After ripping through a one-loss campaign that concluded with a second-straight Class AAA championship, it is little surprise to see Parkersburg well represented in terms of postseason awards.

That success certainly shone through in terms of the Class AAA All-State team where four Big Reds were honored with senior Shay-Lee Kirby and junior Madi Mace each being named to the first team.

Kirby, who averaged 17.7 points per game, hit 51 3-pointers and shot 49 percent from the floor, was named captain of the eight-player first team.

“Shay came back with a whole different attitude and you just kind of had to be around her for four years to appreciate how far she came,” Parkersburg coach Scott Cozzens said. We started the season with [forward] Bre [Wilson] on the DL and then Madi went down and we really didn’t miss a beat. Shay was the one constant. She kept everything together. I can’t say enough about her. She became a real leader. She matured and just had a calmness about her.”

It marked the first, first-team selection for Kirby, who was the second-team captain a year ago and the third in as many years for Mace, who averaged 15.7 points, 5.1 rebounds, 2.7 assists and 3.2 steals per contest despite missing six games this season.

The Big Reds weren’t the only team with two representatives on the first team. George Washington, which fell in a Region 3 co-final to Greenbrier East, also landed two players in senior guard Katy Darnell and sophomore guard Kalissa Lacy.

Darnell made the first team for the second straight year, averaging 16.2 points, 7.7 rebounds, 3.4 assists and 2.8 steals per game while Lacy’s scoring mark of 17.9 points per game led the Mountain State Athletic Conference. Kirby was just behind with Darnell finishing third. It was the second straight season that Darnell and Lacy finished in the top three in the league scoring race.

“Honestly, it’s a credit to Katy and Kalissa and the work that they put in and how they present themselves on the court, off the court and in the community,” GW coach Jamie LaMaster said. “They’re both multi-sport athletes and they manage their schedules and the classroom and playing in the MSAC and putting up those numbers against the schedule we played really speaks volumes.”

Greenbrier East junior Haley McClure rounded out the first team after leading the Spartans to the state tournament, averaging 16.7 points per game along the way. It was the second straight first-team selection for McClure.