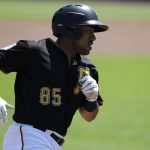 Jung Ho Kang hit a game-ending grand slam to lift Pittsburgh to a 7-5 victory over Baltimore on Thursday. Kang also secured a double for the Pirates.

MORE FROM AROUND THE GRAPEFRUIT AND CACTUS LEAGUES

Marcell Ozuna hit his first spring homer and had three hits, and Dexter Fowler hit two homers for the Cardinals. Jake Woodford allowed three runs in four innings. Dakota Hudson was named the team’s No. 5 starter after the game.

Yankees manager Aaron Boone said Greg Bird would likely play over the weekend after being held out Thursday after being hit on his right elbow in the first inning of Wednesday’s game.

Days after San Francisco starter Jeff Samardzija revealed he was in favor of ties during the regular season, the Giants allowed a pinch-hit solo homer with two out in the bottom of the ninth to finish tied with the Cubs.

Corbin Burnes learned he had secured a spot in the Brewers’ rotation along with Brandon Woodruff and Freddy Peralta, then struck out nine Dodgers over five innings, allowing three earned runs. Tyler Saladino hit a three-run home run, and Yasmani Grandal added a two-run shot.

Justin Turner hit a three-run homer and Cody Asche had a two-run shot for the Dodgers. Hyun-Jin Ryu allowed four runs and five hits in his five-inning start.

Ivan Nova allowed an unearned run and three hits over 5 2/3 innings, striking out five. Alex Colome got one out in the sixth, and three relievers checked the Rangers on four hits and allowed just one earned run the rest of the way. Yonder Alonso hit his fifth home run of the spring and drove in four.