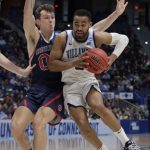 HARTFORD, Conn. — Villanova got off to a slow start in defense of its national title as the Wildcats slogged through the deliberate pace set by determined St. Mary’s.

Villanova had three players in double figures, led for almost 33 minutes but never by more than eight points, and finally clawed out a 61-57 victory over St. Mary’s in the first round of the South Region.

“The tempo was excruciating,” said Villanova coach Jay Wright. “We felt going in we were going to have to grind with them.”

The 11th-seeded Gaels used the same slow pace to upset Gonzaga in the West Coast Conference Tournament and it gave them a chance against sixth-seeded Villanova (26-9) in the opening round of the NCAA Tournament.

Jordan Ford and Malik Fitts each had 13 points for Saint Mary’s (22-12). Ford’s basket in the lane after a few nifty moves got the Gaels within six points at 61-55 with 34 seconds left.

After Paschell missed a foul shot on the other end, Fitts cut the deficit to four points with a leaner in the lane. The Gaels had two more chances in the final seconds but Fitts hit the rim on a 3-point attempt and Villanova freshman Saddiq Bey stole the ball from Ford in the final seconds to seal the win.

“We had a few games this year where we put the press on and were able to get back in the game,” said Ford. “And if we get a few of those loose balls, or maybe make a three when we were down four, I think it’s a different game.”

Saint Mary’s led 30-28 at the half, but Booth scored the first five points after intermission during a 12-3 run that put the Wildcats up 40-33. He had 12 points and five of his six assists in the second half.

Wright praised his veterans for carrying the Wildcats to the win.

“We’re growing, our young guys are growing, but we have two seniors who do everything for us, on and off the court,” Wright said. “We’re just so lucky to have them.”

Villanova: The defending champions are in the tournament for the 14th time in 15 seasons and improved to 14-1 since 2016, including two national titles.

Saint Mary’s: The Gaels are 4-6 in opening round games in the NCAA Tournament and 5-10 overall. Saint Mary’s has advanced to the Sweet 16 once in the modern era when it beat the Wildcats in 2010. There’s a reminder of that run in the hallway outside the locker room that the players see as they walk out to practice each day in McKeon Pavilion.

The game tipped to a relatively empty arena, but it wasn’t because nobody had bought tickets.

Fans of the Wildcats, many of whom made the 4-hour drive from Philadelphia to Hartford, Connecticut, were lined up along with Gaels fans behind metal detectors as security emptied the arena from the afternoon session.

By halftime the 16,000-seat XL Center was nearing capacity, but some frustrated fans were sill filing in.

The game was billed as a battle between one of the nation’s top 3-point shooting teams in Villanova against some of the nation’s best perimeter defenders. In the end, the Wildcats finished 8 of 20 from behind the arc, while Saint Mary’s was 8 of 22.

The taller Gaels won the rebounding battle 33-29 and 10-5 on the offensive end. The Wildcats didn’t have an offensive board until the second half and that led to an 11-4 advantage for Saint Mary’s in second-chance points. Wright said this year’s team was hurt by the transfer of 6-foot-9 Dylan Painter, but is going to have to find a way against taller opponents.

Villanova will play either No. 3 seed Purdue or 14th-seeded Old Dominion in the second round Saturday.

HARTFORD, Conn. (AP) — Ja Morant recorded the ninth triple-double in the NCAA Tournament since 1987 as Murray State trounced fifth-seeded Marquette in the first round of the West Region.

Murray State continued a trend of a No. 12 seed winning at least one game in all but three tournaments since 2001 — including last year’s — but this looked nothing like an upset.

HARTFORD, Conn. (AP) — Mfiondu Kabengele had 21 points and 10 rebounds, and Florida State held off a barrage of 3-pointers from 13th-seeded Vermont in the opening round of the West Regional.

Terance Mann added 19 points for the fourth-seeded Seminoles (28-7), who were tied with the Catamounts at halftime but pulled away late.

SALT LAKE CITY (AP) — One year after dreamers and underdog lovers rejoiced at top-seeded Virginia’s first-of-its-kind, first-round loss, the Gonzaga Bulldogs crushed any thought of a repeat with a wire-to-wire thumping of Fairleigh Dickinson in the West Region.

Rui Hachimura led the Zags (31-3) with 21 points and eight rebounds.

DES MOINES, Iowa (AP) — Kevarrius Hayes scored 16 points, Jalen Hudson added 15 and 10th-seeded Florida beat Nevada in the West Region in the first round of the NCAA Tournament after squandering most of an 18-point lead.

JACKSONVILLE, Fla. (AP) — Keldon Johnson scored 25 points in a huge mismatch that was over by halftime, and second-seeded Kentucky romped in the Midwest Regional over NCAA Tournament newcomer Abilene Christian.

The Wildcats shot 60 percent in the opening period, held Abilene Christian to 5 of 26 from the field and went to the locker room with a 39-13 lead.

JACKSONVILLE, Fla. (AP) — Maryland’s Darryl Morsell made a crucial defensive stop as Belmont went for a last-second upset in the NCAA Tournament, allowing the Terrapins to escape in the East Regional.

The mid-major powerhouse from Nashville, Tennessee couldn’t knock off the No. 6-seeded Terrapins (23-10) from the Big Ten, despite a 35-point performance by Dylan Windler.

DES MOINES, Iowa (AP) — Minnesota won its first NCAA Tournament game in six years behind 24 points from freshman Gale Kalscheur as the 10th-seeded Gophers rolled past Louisville in the opening round of the East Region.

It was the first tournament win in Richard Pitino’s six seasons coaching the Gophers and came against the school that fired his father, Rick Pitino, in 2017.

SALT LAKE CITY (AP) — After a teammate passed up an open layup that could have tied the game, New Mexico State’s Terrell Brown was fouled behind the arc and missed two of three free throws as the Aggies dropped a heartbreaker to fifth-seeded Auburn in the Midwest Region.

The Aggies (30-5) were trailing 78-76 when guard A.J. Harris had his defender beat and looked to be headed to the glass for the tying bucket.

Xavier Tillman had 16 points with 11 boards for the Spartans (29-6), who’ll face Big Ten rival, 10th-seeded Minnesota, on Saturday in search of their first trip to the Sweet Sixteen in four years.

Mays scored 19 points but sealed the game from the foul line, and the Tigers (27-6) needed each one of his free throws.

SALT LAKE CITY (AP) — Dedric Lawson had 25 points and 11 rebounds, and fourth-seeded Kansas dominated inside in a rout over Northeastern in the Midwest Region.

The fourth-seeded Jayhawks (26-9) had a notable size advantage inside and used it, outscoring the Huskies 50-16 in the paint while grabbing 17 more rebounds.