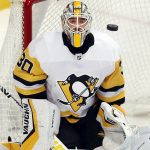 DALLAS (AP) — Jared McCann scored twice, including the go-ahead goal on a spinning short-handed play in the third period, and the Pittsburgh Penguins beat the Dallas Stars 3-2 on Saturday night.

McCann has 11 goals in 26 games since coming over in a trade with Florida, and now leads the Penguins with three short-handed goals. He has four overall this season.

The Penguins stayed even with the New York Islanders for second place in the Metropolitan Division with 93 points, a point behind Washington.

The Stars finished a five-game homestand with their fourth loss, three in regulation. Dallas holds the first wild-card spot in the Western Conference by two points over Colorado with Minnesota a point behind the Avalanche.

Dallas was looking for its first lead after Jack Johnson was called for holding and the Penguins were just trying to clear the puck when Teddy Blueger poked it away from John Klingberg at center ice. McCann took the pass as he was spinning and flipped the puck over Anton Khudobin.

Matt Murray, who made 29 saves, kept the Penguins in front by stopping a shot from Tyler Seguin and keeping the puck between his legs behind him as he was sprawled on the ice with Alexander Radulov trying to poke it into the net.

The Stars had a 6-on-4 advantage for the final 80 seconds after Bryan Rust was called for holding, but couldn’t get one past Murray. Khudobin had 27 saves.

Jake Guentzel opened the scoring with his team-leading 38th goal for Pittsburgh in the first period.

The Stars scored two tying goals in the second. Seguin easily beat Murray on a cross-ice feed from Radulov barely a minute into the period. Andrew Cogliano pulled Dallas even at 2-2 with 80 seconds left by beating Murray in transition after taking a pass in stride from Klingberg.

The Penguins had a goal waved off in the second period when Teddy Blueger was called for goalie interference Erik Gudbranson’s shot from outside the circle. Gudbranson’s chance came after a wild scramble in front of the net ended with Taylor Fedun sweeping the puck out the crease when Khudobin was beaten.

DENVER (AP) — Colin Wilson scored his first goal in more than a month, Philipp Grubauer stopped 29 shots and the playoff-chasing Colorado Avalanche earned their fourth straight win by holding off the Chicago Blackhawks 4-2.

Max Domi and Tomas Tatar each had a goal and two assists as the Canadiens (40-28-7) moved three points ahead of idle Columbus in the race for the second wild card in the Eastern Conference. Artturi Lehkonen, Andrew Shaw and Paul Byron also scored.

RALEIGH, N.C. (AP) — Teuvo Teravainen had a goal and two assists, sending the Hurricanes to the win.

SUNRISE, Fla. (AP) — Patrice Bergeron, David Pastrnak, Brad Marchand and Zdeno Chara each had a goal and an assist as Boston clinched a playoff berth.

PHILADELPHIA (AP) — Josh Bailey scored twice 1:23 apart in the third period, stopping a 12-game drought and leading the Islanders to the win.

EDMONTON, Alberta (AP) — Brady Tkachuk scored 2:09 into overtime for his second goal of the game, lifting Ottawa to the victory.

Bobby Ryan and Brian Gibbons also scored for the Senators (26-43-6), who snapped a two-game losing streak. Ottawa has the fewest points in the NHL with 58.