Ruby stops 25 in net for Wheeling 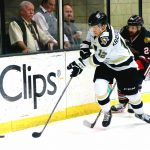 Photo by Joe Lovell Wheeling’s Renars Krastenbergs looks to take possession of the puck against the boards as Indy’s Josh Shala defends on Friday at WesBanco Arena.

WHEELING — The Wheeling Nailers got a huge victory on Friday night, as they pulled within four points of the final playoff spot in the Central Division. Michael Phillips snapped a 2-2 tie with a power play goal in the third period, then Cedric Lacroix and Robbie Hall added insurance, as the Nailers took down the Indy Fuel, 5-2 at WesBanco Arena.

The Nailers netted the first two goals of the evening, before Indy trimmed the gap to one in the closing minutes of the first period. At the 7:52 mark, Renars Krastenbergs picked off a pass, then skated into the right circle, where he threw a shot into the left side of the net. Later in the stanza, Wheeling added to its lead shortly after a power play had expired. Zac Lynch poked the puck to the left side of the slot for Yushiroh Hirano, who rang a shot off the crossbar and in over the goal line. With less than one minute remaining, the Fuel got on the board, as Josh Shalla set up Olivier Labelle at the top of the crease on a man advantage.

After a scoreless middle frame, Indy knotted the tilt at the 3:05 mark of the third, when Travis Brown drove in a slap shot from the left point. The Nailers regained the lead a little more than three minutes later, as their power play converted at a key time. Lynch slapped a pass into the slot, where Michael Philiips redirected the puck into the top-right corner of the cage. Lynch set up an insurance goal on the man advantage later in the period, as his shot was stopped, but Cedric Lacroix was there to punch home the rebound. Robbie Hall tacked on an empty netter to put the finishing touches on the 5-2 triumph.

Jordan Ruby denied 25 of the 27 shots he faced to earn the win for Wheeling. Matt Tomkins made 26 saves on 30 shots in the loss for the Fuel.

The Nailers will travel to Kalamazoo on Saturday for a 7:30 game against the Wings. Wheeling will then be home for two games next weekend — a Frosty Friday against the Fort Wayne Komets at 7:05, then First Responders Appreciation Day Sunday against Kalamazoo.