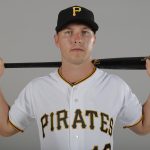 This is a 2019 photo of Corey Dickerson of the Pittsburgh Pirates baseball team. This image reflects the 2019 active roster as of Feb. 20, 2019, when this image was taken. (AP Photo/Gerald Herbert)

TAMPA, Fla. (AP) — Corey Dickerson was 1-for-3 with a single in three at-bats in his first spring training game for the Pittsburgh Pirates, an 8-6 loss to the New York Yankees on Thursday.

Dickerson and Adam Frazier are among players being eased into game action.

“We’re trying some different things as far as when we plug guys in and the amount of work they do and the volume of work that they do to see how they respond to it,” Pirates manager Clint Hurdle said.

Dickerson, who hit .300 with 13 homers and 55 RBIs in 135 games last season, was a designated hitter and could play in the outfield next week.

Frazier is set to play for the first time this weekend.

Pittsburgh is ensuring playing time for prospects and offseason acquisitions.

“That’s one of the things we took into consideration when we looked at the makeup of the roster in spring training,” Hurdle said. “The number of young players that we have here that we actually wanted to put eyes on. The number of guys we targeted in the offseason and brought in from the outside that we told there would be opportunities.”

Jung Ho Kang homered for the third time and is hitting .429 (3 for 7) in three games. … OF Gregory Polanco, coming back from September shoulder surgery, could get at-bats before the team break camp.

AROUND THE GRAPEFRUIT AND CACTUS LEAGUES

Blake Swihart had an RBI single a day after the death of his 23-year-old brother, Romell Jordan. Swihart was pulled following his hit in the fourth and was greeted by a big hug from manager Alex Cora in the dugout.

Jackie Bradley Jr. had three hits, driving in a run and scoring another for Boston. Brock Holt hit his first home run of the spring, a three-run shot, and Xander Bogaerts added an RBI double and a single.

Scott Kingery had a double and a single, stealing a base and scoring a run for the Phillies. Aaron Altherr walked three times and scored twice.

Michael Conforto got his first two hits of the spring and stole a base for New York. Top prospect Pete Alonso had two hits and two RBIs, and Jason Vargas allowed only Matt Carpenter’s leadoff home run, pitching two innings and striking out three in his first start.

Miles Mikolas made his second start for St. Louis, allowing five hits and a walk in three shutout innings.

JaCoby Jones had his first spring hit, singling and scoring a run for Detroit. Matt Moore made his second start for the Tigers, surrendering two runs and three hits in 2 1/3 innings.

Ozzie Albies had two hits for Atlanta. Touki Toussaint was rocked in his second start, allowing five runs, four hits and a walk in one inning.

Carlos Correa had an RBI double for Houston. Robinson Chirinos had a single and a run-scoring double. Jose Altuve went 0 for 3 with three strikeouts at designated hitter and is expected to play second base next in his third game following offseason knee surgery.

Mike Moustakas had a solo home run and Jesus Aguilar drilled a three-run double for Milwaukee. Brandon Woodruff made his first start, pitching one inning. He walked the bases loaded with one out but got out of the jam unscathed.

Chris Stratton made his second start for San Francisco, striking out three in three shutout innings. Drew Ferguson, in a battle with Austin Slater for the starting job in right field, notched his first hit of the spring with a two-run single. Slater tripled and scored.

Lorenzo Cain singled and walked for Milwaukee. Christian Yelich was hitless in two at-bats in his spring debut.

Rule 5 draft pick Nick Green pitched three scoreless innings and got the win in a promising spring debut. Abraham Almonte had three hits and two RBIs, and Steven Souza Jr. added a run-scoring double. Merrill Kelly, trying to win a spot at the back of the rotation, retired just one batter and yielded three runs, three hits and a walk.

Jose Ramirez had an RBI single and a three-run home run for Cleveland. Newcomer Kevin Plawecki had two doubles and an RBI.

Billy Hamilton had a single for his first hit with Kansas City. Jorge Lopez, slated as the Royals’ No. 4 starter, made his first start. He yielded a hit and a walk over two scoreless innings.

Franklin Barreto and Ramon Laureano hit solo home runs and Josh Phegley had three hits and an RBI for Oakland. Brett Anderson, vying for a rotation spot in his return to the Athletics, allowed two hits and a walk in his first start, pitching three shutout innings.

Ian Desmond hit a solo home run and Daniel Murphy had a single for his first hit with Colorado. David Dahl had a double and an RBI, and infield prospect Colton Welker hit his second homer of the spring. Chad Bettis made his second start, pitching three innings and allowing two runs and three hits.

Dee Gordon and Mitch Haniger each had a double for Seattle. Jay Bruce drove in his first run as a Mariner with a groundout. Dustin Ackley drove in two runs. Ackley, Seattle’s No. 1 pick in the 2009 draft, is trying to grab a roster spot after being traded away to the Yankees in 2015. Felix Hernandez made his second start, allowing two runs in three innings while striking out four.

Ronald Guzman hit two solo homers, giving him three homers this spring for Texas. Matt Davidson hit his second home run and Joey Gallo added an RBI double. Drew Smyly, who hasn’t pitched in the majors since 2016 with Tampa Bay and was on the disabled list for Seattle all last season, pitched a perfect inning in his spring debut.

Blake Snell made his spring debut and opened Tampa Bay’s two-hit victory with one strong inning, and Oliver Drake, Ryan Yarbrough and Colin Poche helped closed it out. Promising youngsters Austin Meadows and Lucius Fox each had two hits, and Fox had the only RBI.