Parkersburg Catholic up next 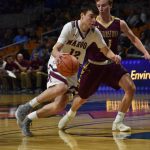 And for the first few minutes, it worked well.

But it is hard to keep a talented offense like No. 2 Wheeling Central off the board no matter how much you want to slow the game down.

After a sluggish first half, Wheeling Central (21-4) got things going after halftime and steamrolled to a dominating 60-35 victory in a quarterfinal of the W.Va. Class A Boys’ State Basketball Tournament on Wednesday at the Charleston Coliseum and Convention Center.

“I thought Coach Sauro had his team really well-prepared,” Wheeling Central coach Mel Stephens said. “They wanted to slow us down, take us off the dribble and they were somewhat successful with that. I didn’t think we did a great job of controlling the dribbler that first quarter.

“From the second quarter on, we did a much better job and were able to get out in transition a couple times and get some baskets. We got the lead and were able to keep the lead, but until we got up about 10 or so, you never know. To these guys’ credit, we were able to do what we needed to do, especially in the half-court offense.”

Stephens had a feeling earlier in the week that Sauro may try that tactic.

No. 7 Williamstown (19-7) used a similar game plan in a sectional final loss to Parkersburg Catholic, a game where the score ended up 28-27 in favor of the Crusaders.

Earlier in the season, Wheeling Central defeated Williamstown, 88-66, at the Rotary Challenge in New Martinsville so Sauro was intent to not let the Maroon Knights score that many points again.

“We were preparing for that,” Stephens said. “When you score 88, you expect them to try that. To their credit, they did a good job. It was 21-13 at half and anyone’s game. I just felt we came out second half and executed a little bit better.”

Williamstown was in front, 8-4, in the first quarter before the Maroon Knights went on an 8-0 run to close the stanza on 3-pointers from Bray Price and Jalen Creighton, as well as a basket by Clayton Abate.

The Maroon Knights came out of the halftime locker room up 21-13, holding the Yellowjackets to five points in the second.

Wheeling Central senior Anthony Robbins was solid on the defensive end, but quiet when it came to offense, being held off the scoreboard.

“At halftime I was 0-for-7 and I think I just calmed down a little bit,” Robbins said. “Coach Tyler (Morando) told me to stop shooting and do what I do, which is drive.”

Freshman Ryan Reasbeck made his presence felt, scoring 10 of his 13 points in the fourth quarter in his first game on the Coliseum floor.

With the Maroon Knights in front 40-27 to start the fourth, his stepback 3-pointer on an inbounds set the tone.

After a Garrett Hill bucket for Williamstown, Wheeling Central scored the next 10 points – a Creighton putback, J.C. Maxwell steal and layup, Reasback behind the back drive to the basket, Robbins field goal and another Reasbeck score – to make it 53-29.

Wheeling Central outscored Williamstown, 18-3, in the fourth quarter before both teams went to the reserves.

“The first half, we really competed well and our defensive effort was really good,” Sauro said. “We were really worried about rebounding with them and we thought if we could be even on the boards, we could have a chance. Obviously, points are hard to come by when you play those guys. They are the best defensive team we play all year.

“They get under you, then slide with you. They are really athletic and do a nice job. Sometimes you just have to tip your hat. They are a very deserving No. 2 seed and are probably the best team.”

Wheeling Central advances to face No. 6 Parkersburg Catholic at 9:30 a.m. Friday. The Crusaders stunned No. 3 Notre Dame, 58-56, earlier in the day behind 33 points from standout Cade Ullman.

“We played them earlier and have played them in the past,” Stephens said. “They are a very good team and very well-coached. They played well (Wednesday) and the Ullman kid is definitely a handful.

“The past few games he has scored 70-some points so we are definitely going to have to focus on him. Just come out and play a little bit better. For some of these guys, it is the first time they have played extended minutes in a state tournament game so hopefully we got some of those jitters out of the way.”