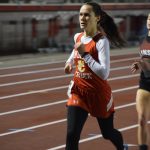 Photo by Seth Staskey Indian Creek’s Sloane Lewis was victorious in the 800 meter run during the Porterfield Invitational at Red Devil Stadium.

ST. CLAIRSVILLE — When a track team lists its goals, postseason and OVAC success are at seemingly always at top of the list.

For the schools that are fortunate enough to host their own invitationals, faring well in those meets are on the next tier.

St. Clairsville demonstrated that Friday evening at the annual Porterfield Invitational under the lights at Red Devil Stadium.

The Red Devils’ boys cruised to victory, scoring 102.42 points, which was 38.42 points better than runner-up Tri-Valley.

The St. C. girls, meanwhile, had a bit more of a fight on their hands. Coach Tony Ciroli’s team finished with 89 points, which was 21 better than runner-up Linsly.

St. Clairsville got an immediate spark toward its title thanks to senior jumper Justin Heatherington.

Senior Luke Watt captured the title in the pole vault, soaring over 11-6.

The Red Devils’ only other victory came in the 4×400 relay when the quartet of Declan Dombrowski, Matt Marling, David Mellema and Zac Orzolek put the exclamation point on the title with a time of 3:36.71 to win by nearly seven full seconds.

Senior Cole LaRoche — the defending state champion in the shot put — continued his mastery of the iron ball event. He reset his stadium record and snagged the meet record with a mark of 61-1 3/4.

Freshman Colt Sechrest picked up his first invitational victory of his prep career with a mark of 143-9.

River’s Cooper Brown — a talented sophomore — was impressive in winning the 400 meter dash. He posted an impressive 50.83 to run away with the title in the lap dash.

Weir’s junior speedster Sebastian Spencer swept the short sprints. He won the 100 in 10.93 and sprinted to a meet and stadium record in the 200 with a time of 21.88, which was nearly two full seconds better than his nearest competitor.

Steubenville’s speed foursome of Jaziah Blackwell, Anthony Rice, Caleb Mitchell and Jorian Jones raced to the 4×2 title in a meet and stadium record time of 1:30.76.

The Red Devils got off and running toward another title thanks to senior standout Emily Baire. A returning state qualifier in four events, Baire won the long jump with a mark of 16-2.

St. Clairsville’s 4×1 team of Haven Brak, Sydney Porter, Alyssa Otto and Emily Baire teamed for a 52.47 to win the title.

Bellaire picked up a pair of victories in the field thanks to the work of senior Brittany Falcone.

She opened her meet with a win in the shot put thanks to a mark of 34-8.

She then shifted to the discus circle and added another gold medal there with a twirl of 116-7.

Union Local’s Allison Loase was impressive in winning the pole vault with a height of 11-1.

Steubenville’s T’Kayla Kelley, who has been one of the area’s most steady performers in the sprints, added two more titles to her growing collection. She won the 100 in 12.97 and claimed the 200 in 26.56.

The Crusaders’ 4×2 team of Karlie Vandeborne, Rebecca Bolster, Clara Symington and Bodo posted a 1:51.08 to win the two-lap relay.