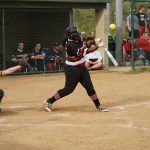 Photo by Andrew Grimm Steubenville’s Raven Banks takes a hack during an OVAC Class 5A semifinal Wednesday against Indian Creek.

WHEELING — Sometimes hot bats can make up for a tough day in the field.

That was the case for the Steubenville softball team in Wednesday’s OVAC Class 5A semifinal with Indian Creek, as coach Gus DiMarzio’s club hammered out 17 hits in a 13-9 win to advance to Friday’s title game.

“Thank God,” DiMarzio said of the batting performance. “We made some bone-headed plays in the field. It was one thing after another and when you are playing in big games like these, you can’t do these things.

“We’re running through rain drops right now, but eventually we are going to get hit.”

Big Red (15-4) made a couple of errors that turned into Redskins (12-4) runs, and a few other miscues that DiMarzio was not happy with.

Mary Marshall led the Steubenville offense with three hits and four RBI. She had two-run singles in each the third and fifth innings.

“Mary is a kid that just sneaks up on you,” DiMarzio said. “She has been in the five hole all year. She’s hitting about .400. She doesn’t get a lot of attention because of Madi (Fields), Lakyn (Blackburn) and Raven (Banks) are hot as can be behind her. She drives the ball and runs like a deer. She is just a good kid and a good athlete.”

Madison Fields went the distance in the circle, striking out 11, while at times fighting control problems with two walks and six hit batters. She plunked Indian Creek’s Megan Kelley all three times she batted before an injury in the field removed her from the game.

“Not one of her better days spots -wise,” DiMarzio said. “She got outs when she needed them. I think it gets a little frustrating when you are out there battling and balls that should be outs aren’t outs.

“She showed a lot of toughness and a lot of character.”

Raven Banks and Maggi Cucarese had two RBI each, while Stef Blackburn had three hits.

Indian Creek, which had a 3-1 lead after the first inning, scored six runs in the final four innings to claw back into it, but the deficit was too great to overcome. Steubenville had a seven-run outburst in the third to take command.

“We dug too deep of a hole,” Indian Creek coach Angie Penner said. “Their bats were hotter than ours. You can’t have the bats not going against a good-hitting Steubenville team. We didn’t score runs when we needed to. We left a lot of people on base. We have to keep working on that.

“We fought until the end. We’re proud of the effort.”

Taylor Scott belted a solo homer in the fifth inning and finished with four RBIs for Indian Creek.

Steubenville: will play No. 4 seed Brooke — which won the late semifinal, 3-2, over Morgantown — at 5 p.m. on Friday.

“(Brooke head coach) Jim DiCarlo is one of the best coaches ever to grace the field in the Ohio Valley,” DiMarzio said. “We are going to have to be ready.”