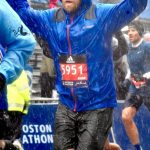 SISTERSVILLE — A year from now, Tyler Consolidated boys’ basketball coach Steven Nutter will be competing in the Boston Marathon.

Nutter qualified for next year’s race with a time of 3:02.00 in Jacksonville.

It will be Nutter’s second time running the Boston Marathon, after last year’s performance of 3:11.05 in the rain.

“Last year’s marathon was the worst weather out of them all in Boston but I wanted to enjoy it and experience it. It was my first time going to Fenway Park in one of the coldest games ever played there but it was an amazing experience.

“It was a lifetime goal to qualify. There were some elite runners who did not make it to the finish line and then there’s me — just a kid from St. Marys getting through. It was awesome with my buds. It’s something I’ll never forget.”

Nutter is also the head coach of the St. Marys cross country team, where he is assisted by Dave Davis and Jeremy Rhodes, who also joined him in his jaunt around Boston.

“They started helping me with cross country and then we just all started running together,” Nutter said. “It’s a stress reliever sometimes, running with friends and just hanging out.”

Nutter began running at a young age, running track and cross country in high school at St. Marys, where he also played basketball.

He then went on to run both track and cross country at West Virginia Wesleyan College.

Now, as a coach and a teacher, it can be hard for Nutter to find time to run and prepare for the big race but he somehow squeezes in a few miles daily.

“I’m training currently but between coaching and teaching it’s tough,” Nutter said. “I try to run in the evening and in the morning before school.

“It’s kind of like coaching. You ask for a lot of hours and time from the kids, so I just try to do the same.

“I just try to get to bed earlier so I can get up and squeeze it all in.”

Even in the midst of preparing and teaching, Nutter still led his Tyler Consolidated basketball team to a 15-10 record and an appearance in the regional tournament this past winter, thanks in large part to his all-state senior Griffin Phillips, who supplied the team with plenty of experience.

Nutter’s own experience will definitely play a part of not only his running of the Boston Marathon but his preparation, as well.

After all — just like basketball — every runner needs a game plan.

“In the past when I’ve run marathons, I think I’ve gone out somewhat conservative,” Nutter said. “This time I’m going to try to go out faster.”

In addition to the Boston Marathon, Nutter and a group of his friends will be running the Columbus Marathon for a second time this fall.