Wheeling Wraps Up Season This Evening at Fort Wayne 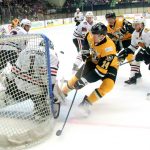 Photo by Joe Lovell Wheeling’s Cedric Lacroix attempts a shot at goal while Indy goalkeeper Chase Marchand defends during the Nailers’ home finale on Saturday. The Nailers lost to the Fuel in a shootout, 5-4.

WHEELING — The Nailers entered Saturday’s home finale at WesBanco Arena mathematically eliminated from playoff contention but they battled like it was Game 7 of the Kelly Cup.

Winston Day Chief scored with 3:35 left in regulation to send the game to overtime and it took a shootout before Indy was able to finally down Wheeling 5-4.

Logan Nelson–who already had one goal in the second period–gave Indy the victory with a backhanded goal that beat Wheeling goaltender Matt O’Connor for the only goal of the shootout.

Nailers captain Zac Lynch, who recorded his 50th assist of the season on Day Chief’s equalizer, was Wheeling’s final hope but was denied by Indy goalie Chase Marchand.

“With both of these teams being eliminated, there was more physical contact and heavy hits than I thought there would be,” Nailers coach Mike Bavis said. “They have a lot of skill and we showed some skill on our goals.

“I thought it was a good hockey game–goes to a shootout and I’m not sure how I feel about shootouts.”

Day Chief’s game-tying goal was his 18th of the season and was set up by a Yushiroh Hirano pass from the left circle. Hirano’s feed found Day Chief’s stick right in front of the net and redirected into the cage.

“(Hirano) actually changed it up a little bit there and delivered a little soft wrister,” Bavis said. “We’ve talked about that and trying to mix it up sometimes to look backdoor, sometimes just deliver it for the tip and sometimes rifle it.”

The Nailers found themselves trailing by two midway through the second period and left everything they had left out on the ice.

Wheeling netted two goals in an 18 second span as Johnny Austin sent a laser from the top of the slot off the cross bar and into the net for his second goal of the contest.

Lynch found Alec Butcher moments later for a well-timed backdoor goal to deadlock the score at 3-3.

Nelson gave Indy a boost of momentum and a 4-3 lead as he scored with only five seconds left in the second period.

Austin’s first goal of the game came with 3:57 left in the first as he whistled a wristshot from above the right circle to light the lamp, tying the game at 1-1.

Josh Shalla, Mathew Thompson and Olivier Labelle each scored for Indy to help secure the 3-1 upper hand in the second.

O’Connor stopped 41 shots on the night, while Marchand blocked 39.

Wheeling was a perfect 4-for-4 on the penalty kill after allowing a pair of power play goals on Friday night.

“I think teams in the last six to eight weeks have made some changes in the power play and I probably should have invested more time in making sure they were working for it better,” Bavis said. “It kind of cost us Friday but (Saturday) it gave us a chance to win.

“I thought we played a hard fought game in the penalty kill.”

The shootout loss wraps up the Nailers’ home record at 17-13-4-2 and they will play their final game of the campaign tonight at 5 p.m. at Fort Wayne.