Bell Homer Not Enough in Loss 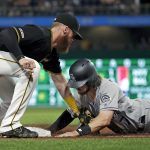 PITTSBURGH (AP) — Josh Bell reached the Allegheny River on the fly for the second time in two weeks, the only notable blemish for the Colorado Rockies in a 9-3 win over the Pittsburgh Pirates on Wednesday night.

After Daniel Murphy hit a three-run homer to put Colorado ahead 3-0 in the first inning, Bell sent a changeup from Jon Gray 454 feet over the Clemente Wall in right field with an exit velocity of 116 mph, making it 3-1 in the second. The home run, his 15th in 46 games after hitting 12 last season, was the fifth to splash into the river on the fly since PNC Park opened in 2001.

The only sustained pressure against Gray (4-4) ended after Kevin Newman cut it to 3-2 with a double later in the second. The Rockies right-hander went seven innings for the second time in 10 starts this year, giving up three runs and seven hits with seven strikeouts.

Tony Wolters broke the game open with Colorado’s second three-run homer with two outs in the third, extending the lead to 6-2. It was his first long ball since Aug. 27 last year.

Brendan Rodgers doubled, and Charlie Blackmon and Raimel Tapia each singled to help tack on another three runs in the fifth.

Pittsburgh got a third run when Bryan Reynolds grounded into a fielder’s choice to score Gregory Polanco in the sixth.

ST. PETERSBURG, Fla. (AP) — Avisail Garcia and Kevin Kiermaier each hit a three-run homer in the seventh inning to power the Tampa Bay Rays past the Los Angeles Dodgers.

Kiermaier also made a rocket throw from center field to cut down Cody Bellinger at home plate, keeping the score tied 1-all in the sixth. Bellinger, who was aboard on a fielder’s choice, failed to reach base safely for the first time in 46 starts this season. He went 0 for 4, dropping his major league-leading batting average to .394.

Nick Hundley had three hits, including a solo homer and two RBIs. Robbie Grossman also drove in a pair of runs as Oakland swept the three-game series and reached the .500 mark for the first time since April 26.

Montas (6-2) struck out nine and gave up five hits, four of them over the first two innings, in lowering his ERA to 2.40.

Torres homered leading off the third and fifth innings to help New York take a 7-2 lead. Gary Sanchez hit his ninth homer against the Orioles this season, and DJ LeMahieu and Thairo Estrada also connected.

ST. LOUIS (AP) — Marcell Ozuna and Matt Carpenter went deep as part of a four-homer barrage and the St. Louis Cardinals split a doubleheader with the Kansas City Royals by winning the second game.

Brad Keller threw seven-plus innings of two-hit baseball to snap a six-start winless streak and Jorge Soler hit a three-run homer as the Royals beat the Cardinals in the first game.

MILWAUKEE (AP) — Yasmani Grandal homered during a big rally and started a bizarre double play on a pitch that got past him and bounced to the backstop, helping Milwaukee outlast Cincinnati.

Grandal hit a two-run homer as the Brewers scored five times in the sixth for an 11-8 lead.

ARLINGTON, Texas (AP) — Hunter Pence homered, Adrian Sampson had another impressive long outing for a victory after not starting, and Texas beat slumping Seattle to complete a three-game sweep.

NEW YORK (AP) — Juan Lagares hit a go-ahead, three-run double off Washington closer Sean Doolittle, Rajai Davis capped the six-run eighth inning with a three-run homer in his first at-bat for the Mets and New York rallied for the victory.

With the game tied at 3-3 in the fifth, Almora launched Cole Irvin’s fastball into the shrubs in the center-field batter’s eye. The 25-year-old Almora popped out of the dugout for a curtain call and doffed his helmet to an ovation from the crowd of 39,246.

Anthony Rizzo hit his 12th homer, a mammoth shot in the third inning that struck the neon beer sign atop the right field scoreboard, tying the game at 3-all. That allowed Hamels to escape with a no-decision and remain unbeaten this season, despite allowing three runs on nine hits and two walks through four innings.

Devers led off the eighth with a blast to left off Derek Law, his sixth. It made Devers the sixth player in Red Sox history aged 22 or younger to homer in three straight games. The others are Ted Williams, Babe Ruth, Carl Yastrzemski, Rico Petrocelli, and Jim Tabor.

Charlie Tilson’s first career homer was a grand slam in Chicago’s six-run sixth inning. A night after managing just one hit in a 5-1 loss, the White Sox got going early in this one, with Jimenez connecting in the second and Jose Abreu adding a solo shot in the fourth to give them a 2-0 lead.

The Astros got a homer from Alex Bregman in a three-run fourth to go on top before Chicago’s big inning.