Golden State Knows That This Is Something Special 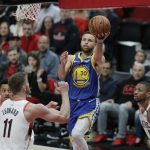 Draymond Green realizes special teams only stay together for so long before something breaks them apart.

That’s why the Warriors decided from Day 1 of training camp to cherish this season.

Golden State is a franchise in its prime — five straight trips to the NBA Finals and seeking a third consecutive title. But the clock is ticking and the Warriors are well aware of the possible ramifications of free agency and how things could change in a hurry this summer.

“Basketball careers aren’t that long. If you can get 10 out of it, you’re lucky,” Green explained. “To be to five straight finals, I don’t even know what to say about it. This is what you play for. This is our goal every year and to get here five straight times is special.”

The Warriors started this run with three All-Stars in Curry, Green and Klay Thompson. They added two more in Kevin Durant and DeMarcus Cousins. How many they’ll have after free agency is any and everyone’s guess.

Curry — with nearly 11-month-old son Canon regularly in his arms for the ride — is certainly relishing this stretch of his decorated career, appreciating how far the Warriors have come during the 10 years he has been in the league.

A third straight title is suddenly within reach, which would be Golden State’s fourth championship in five years.

“We know what’s at stake and what we’re chasing this year, this series, this game, and that’s the only way that you can really put your best foot forward in terms of trying to get back to the mountaintop,” Curry said. “We’ll have plenty of time when we hang the sneakers up to really go back and think about all the different experiences and highs and lows, but right now, we’re two games away from another finals appearance. It’s pretty special.”

The Warriors are the first team to reach five straight finals since the Celtics advanced to 10 in a row from 1957-1966.

Another championship would cement this run of titles among the best ever.

The Los Angeles Lakers of 2000-02 — led by Kobe Bryant and Shaquille O’Neal — are the last team to capture three straight titles.

Golden State advanced without Durant, the reigning two-time finals MVP, and Cousins. Both were sidelined with injuries for the entire Western Conference finals. The finished off Portland without Andre Iguodala, another finals MVP who sat out Game 4 with an injury.

While the Bucks and Raptors are slugging it out in the East, the Warriors are rehabbing.

“I hope it doesn’t go unnoticed or underrated. Five straight finals hasn’t been done since the 60s, since Bill Russell’s Celtics,” fifth-year Warriors coach Steve Kerr said. “Hasn’t been done for a reason: It’s really, really difficult. I just can’t say enough about the competitive desire about the group of players that we have here and the culture that they have built together, playing together regardless of injury.”

Each Warriors run has been unique. When they won in 2015 it was the first title for the franchise in 40 years.

LeBron James and the Cleveland Cavaliers derailed them in 2016, but the Warriors bounced back in 2017 with a dominant 16-1 record during the postseason.

Last year, Golden State joined Russell’s Celtics, Michael Jordan’s Chicago Bulls and trio of Lakers teams — including George Mikan and company in the 1950s, Magic Johnson and Kareem Abdul-Jabbar in the ’80s, and Shaquille O’Neal and Kobe Bryant nearly 20 years ago — as the only franchises in NBA history to capture three championships in four years.

“When I was here the first time, they rebuilt and retooled,” said Andrew Bogut, a member of the 2015 title team before rejoining the Warriors in March.

“They didn’t just sit on their hands thinking it was going to last forever. They freed up cap space, you have to give (general manager) Bob Myers, (owner) Joe Lacob and the coaching staff a lot of credit. There are a lot of teams that win a championship and kind of reward the whole roster, then they end up two-three years down the track and end up in a bit of a hole. Whereas this is a great run for a franchise that will end up as one of the all-time greats.”

The Warriors enjoy playing together and with so many selfless stars and a deep bench they are rarely out of any game.

That doesn’t mean it has been easy, especially with the constant free agency chatter this season.

Durant is an impending free agent and the basketball world continues to speculate on his next move. Thompson’s future with the Warriors is unclear as well, while Green is signed through next season.

“We know that these runs don’t last forever, and obviously there are so many questions and things that could possibly happen with this team this summer,” Green said. “So want to try to take advantage of this opportunity and make the most of it, and deal with the things that come after whenever those things arrive, but right now we’re focused on the task at hand and try to do something that hasn’t been done in a long time, or many times.”

The Warriors are aware of the dynasty talk, but aren’t labeling themselves. They have consistently said their focus is the task of raising another banner in the final season at Oracle Arena before the franchise moves into Chase Center in San Francisco to begin 2019-20.

“I don’t think in those terms. It’s just every opportunity we have to play, these are big moments, big games,” Curry said, “and the context of what this five-year run has been and all that stuff doesn’t really dominate my mind when we’re out there competing.”