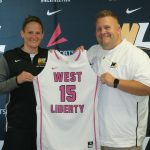 Photo Provided by WLU Athletics West Liberty coach Kyle Cooper, right, and assistant coach Cassie Seth hold a jersey worn by Marissa Brown. The jersey will be on display at the Women’s Hall of Fame Ring of Honor exhibit.

KNOXVILLE, Tenn. — One of the jerseys worn by West Liberty University All-American Marissa Brown will be going on display at the Women’s Basketball Hall of Fame this summer as part of the Hall of Fame’s popular Ring of Honor exhibit.

The Ring of Honor features jerseys of the nation’s top college and high school players from the previous season.

The display of 100 jerseys hanging from the rafters at the Hall of Fame provide a colorful backdrop for the exhibits at the only facility of its kind dedicated to all levels of women’s basketball.

“In past years, featured jerseys have included such all-time greats as Candace Parker, Brittney Griner, Sue Bird and Breanna Stewart. Without a doubt, Marissa Brown is definitely part of an elite group and a part of history now, too.”

The 6-foot-3 post from Columbus, Ohio ranked among the Top 10 nationally in nine separate categories and was the only NCAA D2 woman ranked in the Top 10 for points, rebounds and blocked shots. She shattered her own school and MEC single-season records with 328 field goals — the most by a Division II woman in more than a decade.

Brown also established new school and MEC single-season standards for points (755) and scoring average (24.4 ppg.) and is the first Hilltopper and MEC woman to average more than 20 ppg (20.2) for her career. She scored 20 or more points in 22 of her 31 games with nine games of 30-plus points and two games with 40 or more. Her 46-point night against West Virginia State on Jan. 10 was an all-time school and MEC record.

“Having a WLU uniform hanging from the rafters of the Women’s Basketball Hall of Fame is truly a special feeling that speaks very well for Marissa and the brand of basketball we play here at West Liberty,” Cooper said.

“It is an incredibly well-deserved honor for a young woman who has worked so hard and achieved so much on and off the court. Speaking for Marissa’s coaches and teammates, we couldn’t be happier for her.”

The Women’s Basketball Hall of Fame will be celebrating its 21st anniversary on June 8 with the Class of 2019 Induction Ceremony.