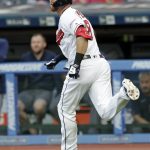 Cleveland Indians' Jordan Luplow heads to first on a two-run double off Tampa Bay Rays starting pitcher Ryan Yarbrough during the sixth inning of a baseball game, Thursday, May 23, 2019, in Cleveland.(AP Photo/Tony Dejak)

Yarbrough (3-1), recalled before the game after a stint at Triple-A Durham, allowed two runs and four hits in a career-high 7 1/3 innings. The left-hander began the year in Tampa’s bullpen, but struggled and was sent down April 24 to work on his mechanics.

He looked fine-tuned against the Indians, who dropped their fourth straight and nearly lost two more players to injury on a freakish play in the sixth.

With Tampa Bay leading 3-0, Kiermaier hit a sinking liner to left-center. Rookie left fielder Oscar Mercado and center fielder Leonys Martin converged on the ball before slamming into each other as they each made all-out attempts at catching it.

Mercado took the worst of the crash as Martin’s left knee drove hard into his right hip. As the two Indians players lay helplessly in the grass, the ball ricocheted toward the left-field corner and Kiermaier easily circled the bases for the first inside-the-parker allowed by Cleveland since 2008.

Martin was shaken while Mercado appeared seriously hurt. He was down for several minutes before getting to a crouch and finally standing. Mercado did some jogging as an Indians trainer and manager Terry Francona looked on and he remained in the game only to be further tested in the inning as he had to race in to catch a short fly and line drive.

Mercado singled in the sixth before being lifted for a pinch-hitter. The Indians said he sustained a bruise.

The Rays didn’t waste any time getting to Plutko as three of Tampa Bay’s first six batters homered.

Plutko allowed just one hit — a homer — while winning his season debut against Baltimore on May 18. But the right-hander wasn’t nearly as effective this time, allowing eight hits in the first four innings and 12 in 5 1/3.

Pham connected on a 420-foot shot and Garcia hit his ninth homer in the first. Adames led off the second with his fourth homer, giving the Rays a 3-0 lead that seemed even larger because the Indians couldn’t do anything against Yarbrough.

Rays: 3B Daniel Robertson was replaced in the fifth after suffering “an allergic reaction,” according to the team. … INF Yandy Diaz won’t get to face his former team after being placed on the injured list with a badly bruised left hand. He was hit by a pitch Sunday against New York and sat out two games before the Rays decided to give him extended rest. Diaz, batting .256 with nine homers and 22 RBIs, was acquired from Cleveland in a three-team trade in December.

Indians: C Roberto Perez sat out his second game in a row with a head injury suffered when he was hit in the mask by a foul tip Tuesday.

BALTIMORE (AP) — Mychal Givens walked Aaron Hicks with the bases loaded to force in the tiebreaking run in the ninth inning, and New York completed a four-game sweep of Baltimore.

Clint Frazier and Luke Voit homered for the Yankees, who went deep 13 times in the series.

Gomez’s first homer of the season came off Wander Suero (1-4) as the Mets completed a four-game sweep.

DETROIT (AP) — Garrett Cooper hit a grand slam with two outs in the ninth inning and Miami extended its winning streak to six games with the win over Detroit.

The Marlins, who had the worst record in the majors last week, extended the longest active winning streak in the big leagues.

CHICAGO (AP) — Jean Segura and J.T. Realmuto homered off Jon Lester, and Philadelphia beat Chicago for a split of the four-game series between division leaders.

SAN FRANCISCO (AP) — Austin Riley hit a game-tying home run in the eighth inning and then drove in the go-ahead run in the 13th with a two-out single off Reyes Moronta, lifting Atlanta past San Francisco.

Riley and Ozzie Albies each had three hits for Atlanta and Tyler Flowers homered. The Braves have won 10 of 13.

Pearce went 3 for 5. He singled in the fourth and sixth innings and hit a two-run shot off Ryan Feierabend in the ninth, his first of the season.

Yo’n Moncada had an RBI double and Tim Anderson added a run-scoring single for the White Sox, who earned a four-game series split by handing Houston its first set of consecutive losses since May 1-2.