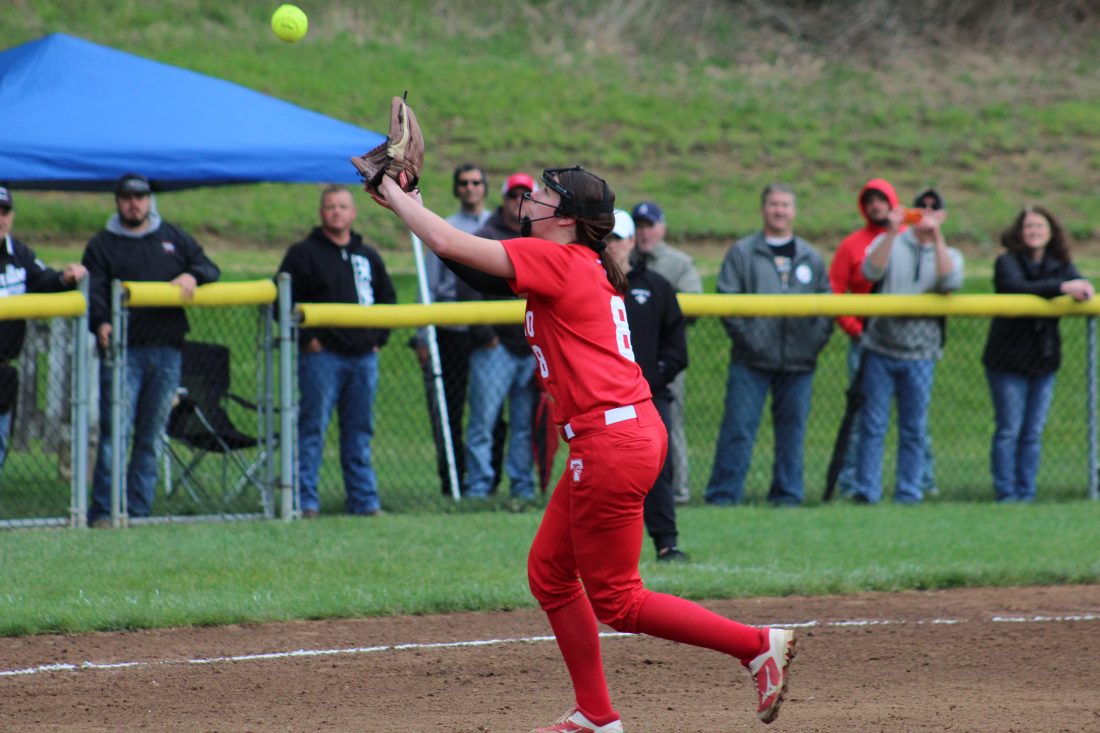 CARROLLTON — Errorless defense and a strong pitching performance from Jamie Anderson normally is a positive for the Toronto softball team.

The Red Knights simply ran into a red-hot Tuscarawas Central Catholic squad Monday, looking for its first regional trip in school history. They also had to face sophomore Sophia Knight, who recorded her fifth consecutive shutout during the Saints’ 2-0 victory in a Division IV Eastern District semifinal matchup.

“She’s been doing phenomenal. She’s been moving the ball around the plate and hitting her spots,” TCC coach Sarah McCoy said. “She’s doing everything we ask of her, and she’s strong. She doesn’t give up at all and gets better as the game goes on. She’s just phenomenal.

“She’s really turned it on her last 10 games and has done exactly what we want. This is definitely the right time for her to kick it on.”

Along with allowing no runs, Knight has struck out at least 10 batters in her last five starts. She fanned 11 more against the Red Knights, while allowing three hits and no walks.

“That’s just the name of the game,” Toronto coach Steve Trifonoff said. “(Knight) pitched good, but we just didn’t hit. We only had a few quality at-bats and maybe a couple of hard-hit balls. We definitely played good enough defensively to win, but definitely not on offense.”

All three hits from third-seeded Toronto (17-9) were singles, and two reached the outfield. Also, all three were stranded, plus a fourth runner via a two-base error.

Out of the six hits for the second-seeded Saints (20-5), five went for extra base hits, including four triples. All of them came with nobody on base, but they were able to sneak two past Anderson.

Maddie Kopp ripped a one-out triple in the bottom the third and later scored on a passed ball. Regian Triplett’s leadoff, first-pitch triple in the fifth set up Halli Blanchard’s sacrifice fly.

Other than those situations, Anderson worked around the others.

“There were a few things we need to fix up, but we did put the ball in play. They’re mistakes we can fix,” McCoy said. “We definitely hit the ball more when we’re more aggressive at the plate. It was nice to have those few extra triples than usual.”

Anderson took the loss despite going the distance. She walked a pair (one intentional) and struck out seven.

“You get the best with what she’s got every time we go out there,” Trifonoff said. “I knew they wouldn’t score a lot, but I was hoping we could score more than two. You’re never going to win with no runs.

With one out in the top of the fourth, Anderson singled and stole second base. However, she was stranded after a pair of strikeouts.

One inning later, Kiara Smith bunted and reached second on the game’s lone error. But, just like Anderson, she was stranded there.

Madison Sapp led off the final frame with a bloop single to right field and went to second base on Lexie Thomas’ sacrifice bunt. Sapp then raced to third on a groundout, but a called third strike concluded Toronto’s season.

Missing out on the regional tournament is just one of the Red Knights’ missed goals. They lost to Bridgeport in an Ohio Valley Athletic Conference Class 2A semifinal and missed out on capturing an Eastern Ohio Athletic Conference title, which Lisbon won.

“It was a pretty good season, but we didn’t set any of the goals we set out for,” Trifonoff said. “It’s a disappointment in that respect. We did win 17 games and made it this far at least. The two goals going into this season were winning the districts and OVACs. We still haven’t done those yet.”

“They won a lot of games as seniors,” Trifonoff said. “They won three straight sectional titles and were in the OVAC tournament every year. Plus, they had good leadership. They’ll be missed for sure.”