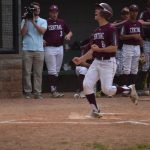 WHEELING — Wheeling Central coach Bo McConnaughy was disappointed with his team’s play Tuesday. That feeling emanated after his Maroon Knights dropped a 3-2 decision to host Ritchie County, evening their Best of 3 W.Va. Region One Final series at 1-1.

McConnaughy was in a much better frame of mind Wednesday night.

Central bounced back from Tuesday’s tough loss in championship fashion, dispatching the Rebels by a 7-4 count at the I-470 J.B. Chambers Complex. The victory propels the Maroon Knights back to Charleston next week, looking to improve on last year’s state runner-up showing.

“We weren’t mentally into the game (Tuesday) for whatever reason,” McConnaughy said while being doused by a bucket of ice from his players. “(Wednesday), we had a little talk in the dugout prior to the game about being ready to play. We played much better.”

Central took command early and weathered one shaky inning to win for the 22nd time against nine losses. Despite the setback, the Rebels enjoyed a fine season, compiling a 21-10 mark.

The Maroon Knights tallied a run in the first inning and exploded for six more in the second, giving starting pitcher Sonny Peluchette a nice working margin.

The Rebels touched the junior righthander for four runs in the third frame. Peluchette responded by pitching his best ball the balance of the night, yielding two hits over the final four innings.

“Sonny did a real nice job after the third. He walked three batters in that inning that got himself in trouble,” McConnaughy said. “I told him to throw strikes or I would have to take him out due to the pitch count. He settled down and finish out strong.”

Central tallied its first-inning run with two outs. Angelo Gentile kept the frame alive with a single. Peluchette followed with another single that was mishandled by the rightfielder, enabling Gentile to race home.

Catcher Dominic Pompeo ignited the Maroon Knights’ second-inning explosion with a single. He scored on a Jordan Waterhouse triple.

Ritchie County made matters interesting in the third inning, courtesy of three walks, an error, a two-run RBI single by Dylan Taylor and a single from Garrett Owens, knocking in two more Rebels.

Central mounted a threat in the fifth. Pompeo singled before two one-out walks loaded the bases. Lee lined a shot to the right side of the infield, stabbed by Tatem McLoy. The senior first basemen completed the double play by diving to the bag.

Peluchette struck out four and walked three in his complete-game effort. He surrendered seven hits.

Ritchie utilized three hurlers. Sophomore Dakota Wayne started but gave way to Zach Knight with two outs in the second. Knight was lifted for Elijah Shriver after walking the only two batters he faced. Shriver pitched superbly, allowing just two Maroon Knight hits the remainder of the contest. He struck out one and passed two.

“When we got down early I just told our kids that we have a lot of ball left to play. I am proud of them. They didn’t quit,” Ritchie coach Danny Vanoy said. “We were just another big inning away from pulling it out. We just had too big a hole to dig out of.

“But this is a great group of kids. I told them before the season they are a 20-win team. We ended up with 21. Twenty-two would have been real nice. It is a very committed group. They were in the weightroom at 6:30 every morning. We are a young team with only two seniors and so is Central. They only have three. So I want to set the tone right now. We would love to have a rematch with them again next year in the regional.”

Peluchette had a memorable night. In addition to earning a win, he reached base all four times with two singles, a double and a beaning.

Gentile and Pompeo both added a pair of singles to the winning attack. Knight was the lone Rebel to record two hits.

“We have had a tendency this year when we get up by six or eight runs to sit on the lead. But (Wednesday) we held our ground,” McConnaughy said. “To be honest, we are a young team. We didn’t get most of our players until three days before our first game.

“I didn’t think we would be a 22-9 team. I thought it might be the other way going into the season. But we are going to Charleston and they (Ritchie) are not.”

Central was a little sloppy in the field, committing five errors. Those miscues were offset by some defensive gems by first baseman Clay Slider and Pompeo.