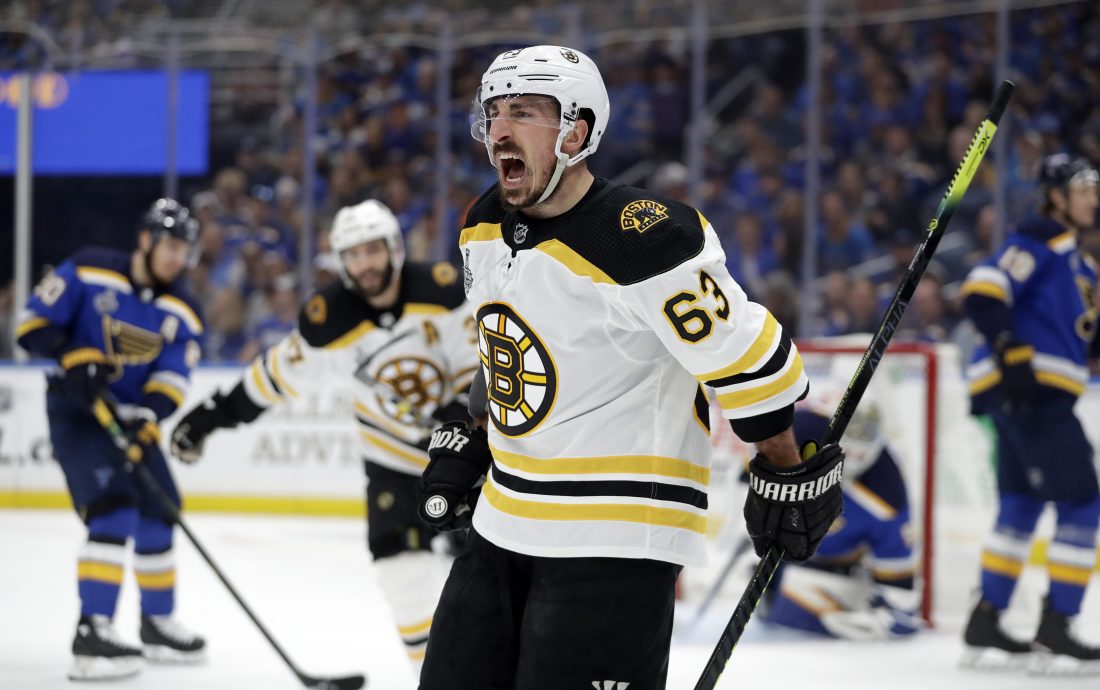 ST. LOUIS (AP) — The strains of Jay-Z and Linkin Park’s “Numb/Encore” mashup emanated from a small speaker on the hallway floor outside the visiting locker room following the Boston Bruins’ morning skate.

“I don’t know what you’re expecting of me … put under the pressure … of walking in your shoes.”

Despite all the pressure on Boston, team DJ Torey Krug wouldn’t dare change anything in the face of elimination.

“Same playlist I’ve been playing for months now,” Krug said. “It’s been the same music for months on end.”

And the same Bruins, whose consistent approach on and off the ice will be tested one more time Wednesday in Game 7 of the Stanley Cup Final against the St. Louis Blues. This is an experienced Boston roster with five players left from the 2011 Cup championship team that vanquished the Canucks in Vancouver, also the most recent time the final went to a seventh and deciding game.

“There’s never been a (Cup Final) Game 7 in Boston, (so) I would say lean on past experience with that, but there is none,” Krug said Monday. “There is experience from guys who played in Game 7 in Vancouver.

“It’s tough. It’s the most exciting game in all of our lives and I think whoever maintains their composure and discipline within their system, how they play and how they approach the game is probably going to prevail.”

The smart money is on the Bruins recapturing the Stanley Cup on home ice, and sportsbooks give them the edge. Not only do they own an experience advantage in these situations, but carry with them some momentum from a 5-1 rainstorm on St. Louis’ potential parade in Game 6.

Four of the previous five times in the 2019 playoffs that a team down 3-2 won Game 6, it also won Game 7. Just don’t tell that stat to Boston coach Bruce Cassidy because he doesn’t believe there’s carry-over from a strong showing Sunday night.

“New slate,” Cassidy said before the team flew home to Boston. “They had expectations, Stanley Cup is in the building. … I can’t speak for them, but it can be tough, knowing we’re playing good team defense to now have to come back (from a deficit) that far. But I don’t think it will affect them all on Wednesday. It’s one game, winner take all. Both teams will be in a good place mentally, ready to go.”

Longest-tenured Bruins player Patrice Bergeron put his teammates in the perfect mental state the day of Game 6. Young defenseman Charlie McAvoy had trouble calming his nerves until Bergeron spoke up in the locker room and said exactly what players needed to hear.

Speaking in French, Bergeron said he told the team, “We are in a situation that is everyone’s childhood’s dream here and we must realize it.”

That’s also a pretty normal thing for Bergeron to boost up his teammates, which he considers to be part of his role. It’ll be up to him, captain Zdeno Chara, winger Brad Marchand, center David Krejci and goaltender Tuukka Rask to impart some lessons from winning in 2011 and also losing to Chicago in the final in 2013 — the time Bergeron played through broken ribs and a punctured lung but didn’t get to lift the Cup a second time.

“They’ve been here for us all year (and) before that, too,” forward Sean Kuraly said. “You look to them and can feel comfort in that, follow in their footsteps and know you’re walking in the right direction.”

The Blues are marching in the wrong direction after failing to close out a series for the first time in the playoffs. They eliminated Winnipeg, Dallas and San Jose on the first chance each time and all on home ice.

Now they go on the road where they’re 9-3 this postseason with two of those victories coming in Boston.

“Listen, if you told me four months ago we were going to be in the finals in Game 7, I think I’d take it,” St. Louis coach Craig Berube said. “We’ve been a good road team. We’ve won twice up there in this series, so we’re a confident group.”

Just like the Blues couldn’t measure up to the Bruins in Game 6, it would be hard to make the argument that they’re as confident after the deflating loss Sunday, Ryan O’Reilly and the Blues have typically been able to bounce back well and stay as even-keeled as their coach.

“We know if we play our best game, we can take these guys,” O’Reilly said. “Go there and get it done.”