Karaffa strikes out 12 in 3-1 victory against Hillsdale 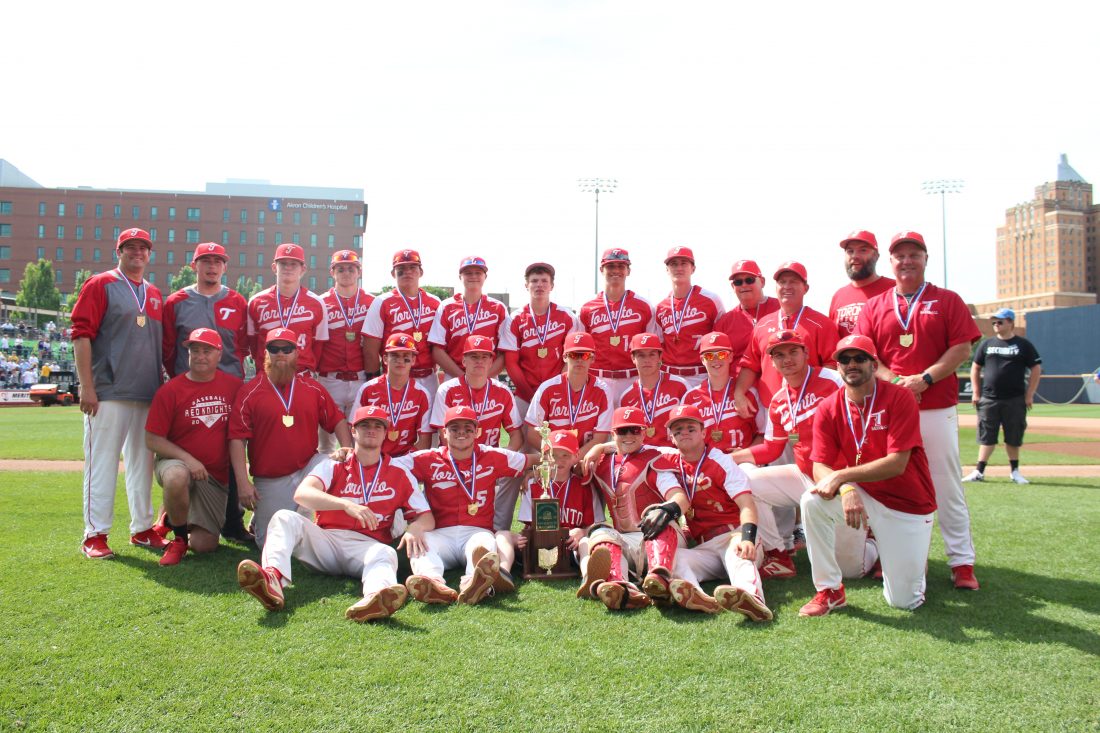 Photo by Joe Catullo Toronto poses with the Ohio Division IV state baseball trophy after defeating Hillsdale, 3-1, at Canal Park in Akron. It is the second state championship for the Red Knights and first since 1998.

AKRON — When Nate Karaffa unleashed his fastball one final time, nothing went through his mind except finishing the job.

It wasn’t his career, his individual accomplishments, how he and his teammates always dreamt of this moment or even how he’ll look in an Ohio State uniform next year. He was locked in on one final goal.

Karaffa’s last pitch as a member of the Toronto baseball team was a bullet that zipped past Hillsdale’s Brock Hoverstock, who swung and missed. One of the greatest to ever don a Red Knights cap concluded Toronto’s magical season with a 3-1 victory Sunday to capture the Division IV state championship, the second in school history and first since 1998.

“I can’t describe this feeling right now. You have to be in my shoes to know how I’m feeling,” Karaffa said. “It’s definitely the greatest feeling I ever had. All the hard work we put in paid off, and we, the coaches and the community deserves it.

Canal Park shook with what felt like the entire city of Toronto celebrating in the bleachers.

Even with another state final starting shortly after, the Red Knights (28-5) took their time to soak it all in and take one final team photo.

“It’s great to have this one. Ever since we were 6 years old we’ve been dreaming about this,” Nick Sninchak said. “Growing up together, there isn’t a better group of guys to grow up with. I love each and every single one of them.

“Everyone doubted us early in the season because we started off shaky, but then we all came together and clicked as one. This is great to have and to win for the city.”

Tears of joy and hugs filled the infield. Although Toronto coach Brian Perkins, who celebrated his 48th birthday two days prior, also got in on the act, he took a step back at one point, wanting to see everything unfold in front of his eyes. He was an assistant on the 1998 squad, but he never had this feeling in any of his 16 years as the manager.

“Im on Cloud 9, I’m not going to lie,” he said. “This is everything that everybody talks about. I’m just very proud for the community of Toronto, all of the players and all of the coaches. Man, I have the best assistant coaches around. I couldn’t be more ecstatic.

“The championship in 1998 will always be special, but now there’s a another one. We have something else to talk about now.”

As for the game, the Falcons (27-3), who were riding a 20-game winning streak, only mustered two hits against Karaffa and struck out 12 times. Their only tally came on an RBI double in the bottom of the sixth from Briar Funk.

“I was just able to command my fastball and controlled my curveball,” Karaffa said. “I kept most of the pitches down. Myself and the team were loose all day.”

Karaffa did not allow a walk and hit three batters, but none of them crossed home plate. He also worked around an error that could’ve resulted in a double play in the middle innings. The final batter he plunked led off the seventh, but a 4-6-3 double play all but sealed the victory.

Funk’s double made the score 2-1. In the top of the seventh, the Red Knights needed to get that run back even with the advantage. Sninchak stepped in, and there’s a reason Perkins calls him clutch.

“I knew I had to come up clutch,” Sninchak said. “My teammates rely on me to get that big hit. We were a little tight at the end, I’m not going to lie. We just needed that one run — I had a job to do.”

He roped a two-out RBI single that made the score 3-1. Luckily, leadoff hitter Nick Chetock, one of the fastest players on the roster, was the player running from second base. He slid underneath Carsten Betson’s tag just in time for the umpire to rule him safe.

“Nick’s Mr. Clutch, man. He’s Mr. Big At-Bat,” Perkins said. “The bigger the situation, the bigger he comes through. Man, what a great and tough kid. He’s been fun to coach these last four years, and I’m going to miss him.”

The other two runs came during a two-out rally in the third.

After Chetock and Lucas Gulczynski singled, Karaffa followed suit with an infield knock. Hillsdale’s first baseman was unable to pick the ball clean, allowing Chetock to score. Next up, Sninchak delivered with his first RBI single.

Despite 10 hits and two walks, the Red Knights mostly struggled against Garrett Goodwin, who almost sat out. He injured his left leg during the Falcons’ celebration after the state semifinal on Friday. The injury did cost him a spot in the lineup, as he’s the team’s leadoff man.

“We knew that he was going to go on the mound. He threw a heck of a game, and we’re just glad to have it,” Perkins said.

Sninchak finished with three hits overall, including the team’s only extra-base knock (a double to lead off the second). Karaffa also tallied three hits, while Gulczynski had a pair Chetock singled, walked and scored twice. Kobe Herrick also singled and walked. All 10 hits and two walks came from the top five guys in the lineup, one game after the bottom three delivered.

“I was young when it (1998) happened, and I really enjoyed it,” Perkins said. “Now that I get older, I’ve learned to just sit back and take it all in. Being able to take it all long means something special to me on a personal level.”

Karaffa said he was loose all day long, even when Sunday’s contest began at 2:30 p.m. instead of the scheduled 1 p.m. The Division I championship went 10 innings, which Cleveland St. Ignatius won. Perkins and the others saw it, too.

“We knew coming in that Nate was going to do an excellent job,” Perkins said. “Any time you get Nate on the mound, he’s always in command. Once we got a few runs across, I felt pretty comfortable with what we had. He’s just been a leader for us like the other (five) seniors.”

Without question, the 2019 Toronto baseball team left a legacy that will be discussed until the end of time. More specifically, it catapulted Karaffa up the food chain.

Did a state title make him the greatest of all time, or at least the G.O.A.T. under Perkins’ tutelage?

“That’s for other people to judge,” Perkins said with a smile. “In my opinion, he’s right up there. We’ve had so many great athletes go through Toronto, and his name definitely has to be up there. He’s a special athlete in all sports, and what makes him special is he’s a great kid, a great leader and unselfish. He has a wonderful family and is a great kid.”

Sunday’s victory marked Toronto’s 16th in a row. Its last defeat came in the first of a two-game stretch with Columbiana, 7-3. It won the next game, 3-2, right before capturing Ohio Valley Athletic Conference Class 2A title.

“I’ve been preaching all year that you don’t win without good kids and good leadership, and this group will always be a special group of seniors for me,” Perkins said.