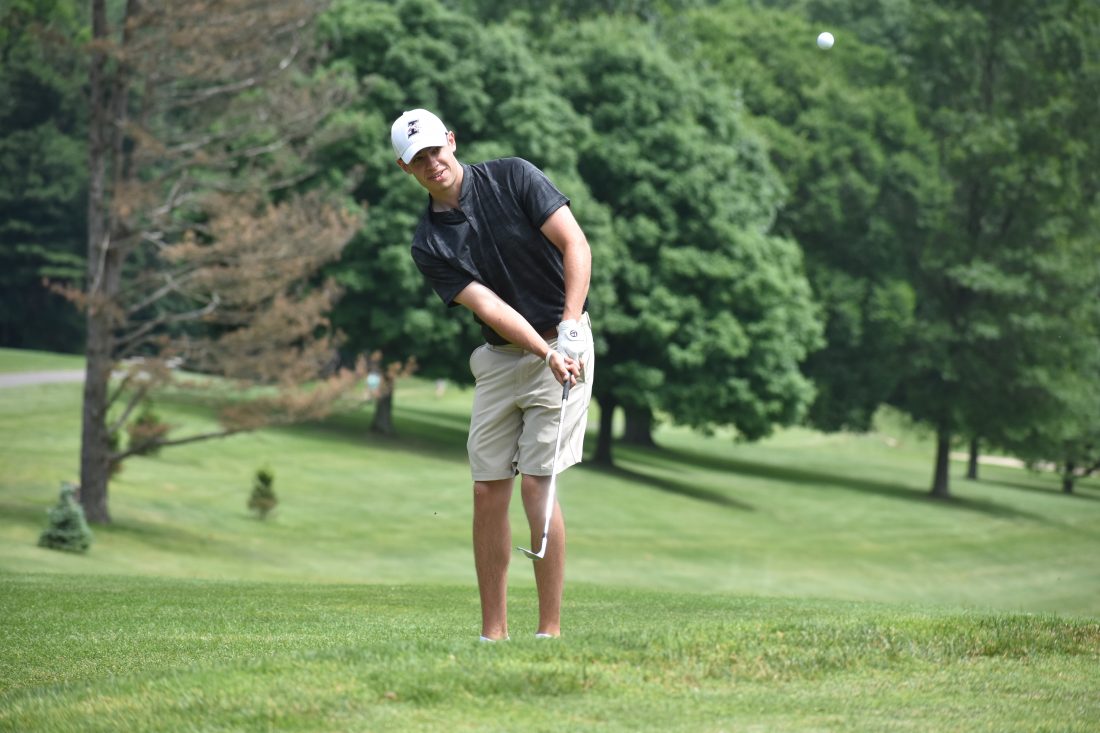 WHEELING — The kid can play.

Jacob Nickell, 19, let loose on a windy Crispin Course on Sunday and caught fire down the stretch to win his second Bordas and Bordas Amateur Golf Classic in the last three years.

What makes it even more impressive is that he claimed both titles before his 20th birthday.

“This is unbelievable,” Nickell said. “It’s cool to be close to the top with so many good golfers like Larry (Lis Jr.), Bryan Myers and BJ (Tulodzieski). It’s a lot of fun to compete with those guys.”

Jesse Patnesky and Jade Waligura rounded out the Top 5 with cards of 5-under 137.

“I just felt like I did what I needed to do,” Nickell said. “I kept the ball in front of me and avoided bogeys as much as I could and I just let the birdies come to me.”

Nickell’s success on the back nine carried over from Saturday as he sank birdie putts on four of his last seven holes.

His only bogey of the day came on the 13th hole but he quickly recovered by launching his next tee shot 351 yards to reach the green on 14. He birdied the hole moments later.

“That got me going,” Nickell said. “It was kind of a tight line and I was just trying to get as close to the green as I could. I was surprised to see I got it there.

“I made a good birdie on the next hole and hit a birdie putt on 17. I knew that was a big one so that felt good to get a birdie there.”

Lis Jr. knew that whoever played better on the back nine would raise the hardware.

Although Lis Jr. was unable to catch Nickell in the individual event, he took great pride in another accomplishment.

Alongside his son, Austin Lis, the father and son duo rolled to victory in the Best Ball event, turning in a card of 19-under 123 to win by three shots over George Templin and Mike Wetzel.

“It was a blast playing with my son,” Lis Jr. said. “If I would have won the individual event, I would still be happier winning Best Ball with my son.

“I was proud of him because when you’re in contention like this, kids get nervous. But when he made a bogey, he came back with a birdie so his temperament was good.

“This is probably the happiest I’ve been with finishing second. What more could you ask for?”

Nickell and Best Ball partner Scott Seabright placed fourth but it was their teamwork that helped catapult Nickell to the top overall spot.

“Playing with Scottie is great,” Nickell said. “He keeps me loose. I really wanted to win the Best Ball title with him because we won that two years ago. But he is like having a caddie out there.”

“I was just trying to come out here and have fun and meet some new people,” Seivertson said. “The course was playing pretty tough both days. The greens were fast and it was tough to get anything to hold but I just tried to play my game and ended up playing pretty well.”

Goodrich, an incoming freshman at Wheeling Park, delivered the shot of the tournament on Sunday as he recorded a hole-in-one on the 190-yard Par 3 7-hole.

Bob Clark tallied birdies on the final three holes to walk away with the win in the Senior Flight, while Mike Pietranton secured the victory in the First Flight.

John McCabe Sr. and John McCabe Jr. were victorious by one shot in the First Flight Best Ball event, with Pietranton and Tom Gaudino finishing second.