WVU’s Brown one of four new coaches in the conference 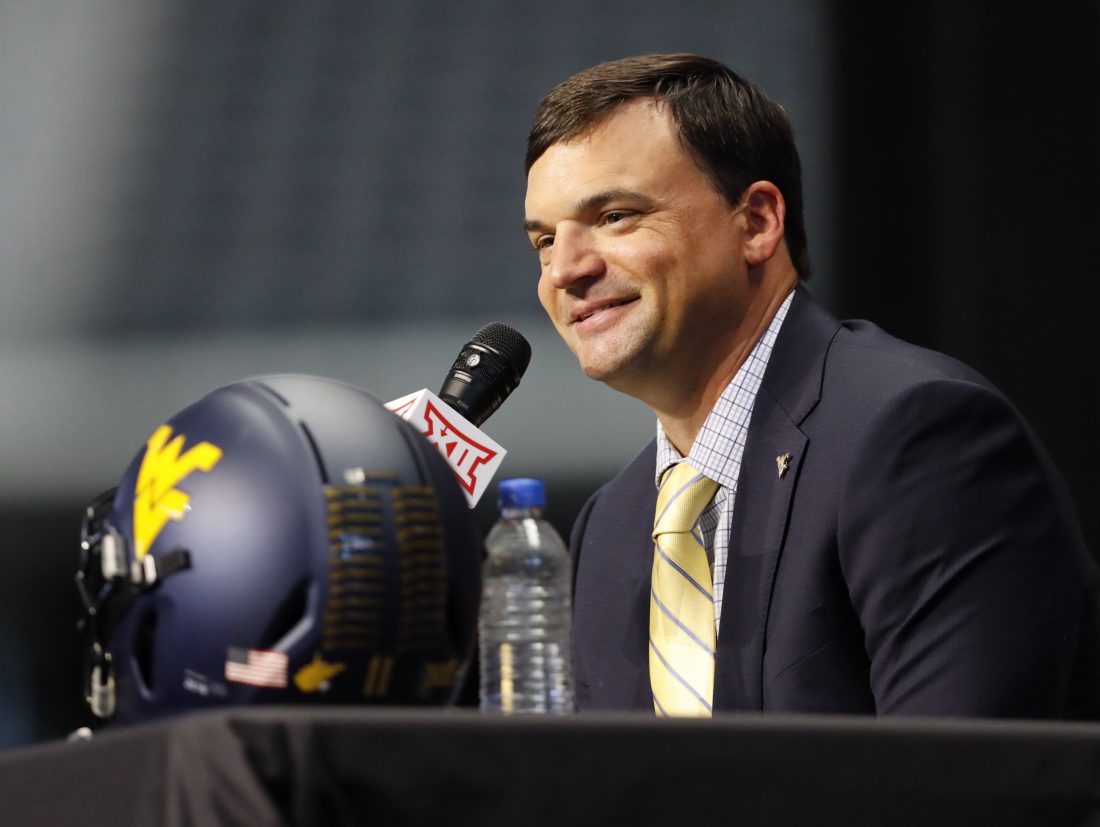 ARLINGTON, Texas — Tom Herman knows that Texas is probably a bit ahead of schedule after 10 wins in his second season that included making the Big 12 championship game and a Sugar Bowl victory.

That doesn’t necessarily mean the Longhorns are back just yet.

“We weren’t here to just have a really good season in Year 2,” Herman said Tuesday. “We were here to rebuild a program that’s capable of sustaining success, and we feel like we’re on the way there.”

With junior quarterback Sam Ehlinger, the preseason Big 12 offensive player of the year, the Longhorns are picked to again finish second in the league behind four-time defending champion Oklahoma.

The Longhorns won the Red River rivalry game at the State Fair of Texas last October. But the Sooners won the conference title game at the home stadium of the NFL’s Dallas Cowboys, where the two-day Big 12 media days wrapped up Tuesday and where the championship game will be played again in December.

“When you take over a program that hadn’t won 10 or more games in a decade, and had gone through three straight losing seasons, there’s some work to be done, in terms of being able to sustain a level of success that everybody associated with Texas football expects,” Herman said. “I was really proud of our players for their buy-in level last season, and the results on the field showed that. It’s still a work in progress.”

With four new coaches in the Big 12 this season, the biggest turnover in league history, only Oklahoma State’s Mike Gundy, TCU’s Gary Patterson and Iowa State’s Matt Campbell (going into his fourth season) have been in the league longer than Herman.

After success outside the Power Five, two of the coaches featured on the final day are just getting started — Kansas State’s Chris Klieman and West Virginia’s Neal Brown.

Brown, who took over the Mountaineers after Dana Holgorsen left for Houston, is coming off three consecutive 10-win seasons with bowl victories at Troy.

He is returning to the Big 12, where he was Texas Tech’s offensive coordinator from 2010-12.

Klieman was part of seven FCS championships the past eight seasons, including four in his five years as head coach. He replaced the retired Bill Snyder, who won 215 games in his 27 seasons.

“What coach did at Kansas State was nothing short of remarkable and I’m going to feed off that,” Klieman said. “We have a great culture because of what coach did. I know I’m not going to fill his shoes. I’m just trying to continue in his legacy, but doing it our own way.”

Herman said he looks at Clemson coach Dabo Swinney, whose Tigers have won two of the past three national championships. It was in Swinney’s eighth season when the Tigers finally won a championship, in 2016, before beating Alabama again last season. The last national championship for Texas — the last for a Big 12 team — was the 2005 season, Mack Brown’s eighth in Austin, though the Longhorns did get to another title game in 2009.

“I’m not saying we’re setting the bar for seven years, but what I’m saying is we want win championships, and we want to win them now,” Herman said. “But we were brought here to rebuild a program and that takes time.”

Ehlinger threw for 3,292 yards with 25 touchdowns and only five interceptions last season. He also ran for 16 scores.

Criticism of Ehlinger from former Oklahoma and Heisman Trophy-winning quarterback Baker Mayfield is one thing; it was different when NFL Hall of Fame quarterback Terry Bradshaw recently told a group at Louisiana Tech, his alma mater, that Ehlinger “ain’t that good.”

Herman and Ehlinger both downplayed the Bradshaw comment, though Herman said his quarterback loves to play with a chip on his shoulder.

“I’m sure he’ll use this to crank it up a notch,” Herman said.

Ehlinger was asked if it was something like out of a dream to be answering questions about Bradshaw.

“I don’t know if this is a dream, to tell you the truth,” he told a crowd of reporters. “Regardless of what happens, to be in this situation at the University of Texas is what I dreamed of. It’s a blessing within itself.”