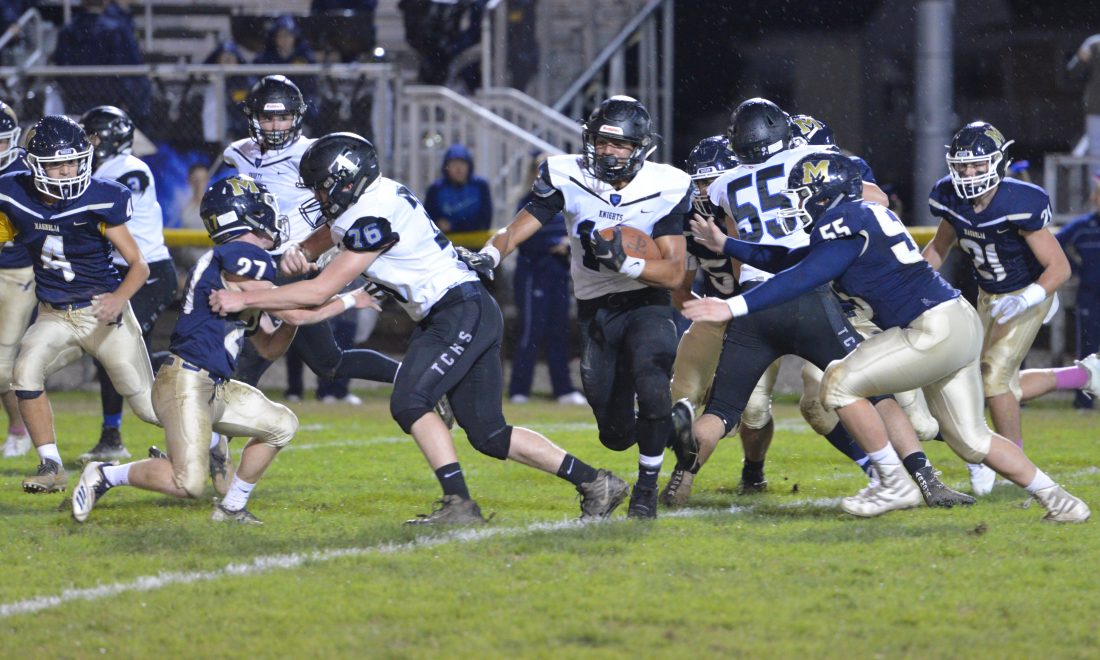 Photo by Scott McCloskey Tyler Consolidated running back Mark Rucker looks to lead the Silver Knights in battle on the gridiron with a confident swagger when football season begins next month.

SISTERSVILLE –The beginning of football season is a time to wipe the slate clean for most teams and players around the area.

For Tyler Consolidated running back Mark Rucker, a repeat of last season’s output could pay big dividends for a Silver Knights team that went 6-5 in 2018. Even though he is gearing up for his senior campaign, Rucker couldn’t help but reflect on all the work he put in during the past few years.

“It’s just crazy being a senior now, because those three years go by so quick,” Rucker said. “Just every year, you see your role change. I felt like as a freshman, I’ve got to go out there and make a play and win the battle. My sophomore year, I got a bigger role, but it’s still just to focus on making the play.”

That role extended into 2018, as he followed up a 30-plus touchdown season with another season to remember. Rucker paired with now-graduated quarterback Griffin Phillips, and he picked up right where he left off.

On 189 carries, Rucker averaged 8 yards a clip and more than 1,500 rushing yards en route to scoring 23 times on the ground. He also succeeded in providing the Knights with five two-point conversions.

When Phillips searched for Rucker through the air, the halfback was just as productive.

The two-time West Virginia Class A first team all-state selection caught 43 passes for 546 yards and six touchdowns. A special teams score gave him 30 for the season. In total, Rucker tallied 190 points and set a new school record for most points scored in a career. Even though the team is younger going into 2019, Rucker is confident he can help carry Tyler Consolidated where it wants to go.

For Rucker, he believes he is currently on “the most talented” Tyler Consolidated team in the last four years. Crediting seniors on the offensive line in Jacob Sharp and Zach Haney and another senior offensive weapon in tight end Gage Huffman, Rucker has high expectations for this edition of the Knights.

“Losing (Phillips) is a big loss. He did wonders for this team when he was on it,” Rucker said of his former signalcaller. “When a guy like him leaves, you’d think it would put a lot of pressure on me, but the senior leadership on this team is going to be amazing.

“I’m still with my man, Gage Huffman. I think our line is really good. The one thing about us is that we know no one expects us to do anything with the loss of Griffin and a couple other seniors last year, but we have everything in the world to prove. I’ve never seen teammates go out and do the things they’ve done this offseason. It just makes this season more exciting.”

Speaking of having everything to prove, Rucker wants to prove he can be the best running back in all of Class A. He believes this is the season that will cement his status at the top.

“There are obviously good running backs in the state. JJ Davis (future University of Toledo commit from Bluefield) and Hunter America (two-time first-team all-state selection from Doddridge County), but in single-A, it’s me. I have no doubt. I’ll stay on that all day.”

Lastly, Rucker wants to help the Knights beat teams like Magnolia and Williamstown en route to having a senior season full of success. That includes getting a win in the playoffs.

“You know, I always think about that,” Rucker said.” Everything looks good on paper right now with everything I’ve done, but the thing I have to do right now is get a playoff win and get to the championship. That’s all I want to do, and it’s what I have to do.”

If Rucker is able to accomplish his goals, it could mean big things are ahead in Sistersville. Take Rucker’s word for it.