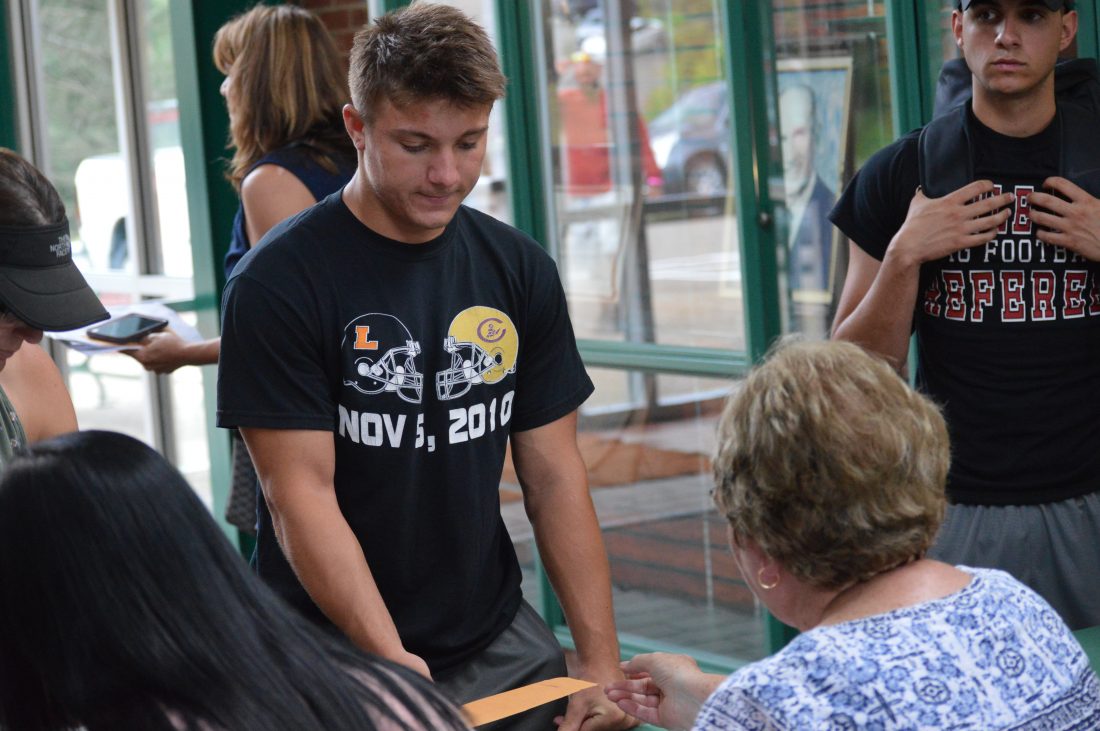 BETHANY — Football season is officially back in the Ohio Valley.

Sunday morning marked the beginning of an exciting week for many athletes as they made the trek to Bethany College to check in at camp for a week that will lead to the 74th annual OVAC Rudy Mumley All-Star Game. Kickoff for the game is scheduled for Saturday at 7:15 p.m.

It was a morning filled with excitement, not only for the players, but the coaches as well. After months of choosing his players and preparing for this week, Ohio coach Andrew Connor is ready to roll.

“It’s just excitement and it’s something new. You get to meet kids, especially most of the Ohio kids we’ve played against,” Connor, who is also the head coach at Indian Creek, said. “I think it’s a cool thing that I finally get to coach those kids. We have tried to tackle Brady (Kolb) for years at St. Clairsville, so it’ll be nice to give him the ball. Overall, I think the kids just seem excited.

“They were here on time. My staff is really excited to do this. We just look forward to get going.”

It was more of the same on the West Virginia side as coach Mike Eddy was also preparing for the annual game.

“It really is an honor to be selected to coach in this game,” Eddy said. “It has consistently been one of the more prestigious all-star games in the state. Having an opportunity to coach in it is quite an honor for our coaching staff. It’s also a little bittersweet for us because our coaching staff at the end of last season split and we all went our separate ways. It’s nice to get everyone back together one more time for this week.

“And of course it exciting to meet these kids, some guys we’ve coached against and some other kids that you read in the newspapers. So having another opportunity to work with them obviously is exciting.”

Both coaches know that less than a week of practice is not a lot of time to prepare for a game.

That’s why they hit the ground running on the first day.

“We’re going to go like a regular practice,” Connor said. “We want to try and go contact (today), so we’ll get them ready (Sunday), do conditioning, just like you would at a normal practice at your school.”

Eddy — who will represent Parkersburg South for one last time as he took a job in Logan — also planned to do some light drills with the West Virginia side on Sunday. He also wants to get the kids to know each other and find where they will best fit on the field.

“Right now it’s kind of just going to be a meet-and-greet and try to get to know these guys,” Eddy said. “Again, we haven’t coached them before so we’re not sure exactly what their strengths and weaknesses are. Obviously they are all good football players, but where do they best fit? We’ve got 30-plus kids here. They all came here to compete and play, so we’ve got to find where they fit best, whether it’s on the offense, defense or special teams. So (Sunday), it’s really going to be about giving them an overview of the offense, defense and special teams, let them get out and run around and do a couple drills, so that (this morning), when we get started, we’ll be really be able to start putting those pieces into place.”

While many of the athletes know one another from playing against each other for a handful of years, Connor also had some icebreakers in mind in order for his team to get to know one another on a more personal level.

“That’s one of the things that make all-star games unique,” Eddy said. “There is a lot of things that you would typically do with a new team that you don’t necessarily really get into in an all-star game. These guys are all seniors and within a month of going away to college. This is a good experience for them to get a feel of what that’s going to be like.

“A lot of these kids have played travel ball together and played in little league growing up. And with the age of social media now, a lot of these guys are at least familiar with each other. They’ve heard their names. For the most part, these guys are going to have a bit of familiarity with each other. There may be some guys in the further reaches that maybe don’t see each other much, but my guess is it won’t take very long to kind of buddy up and figure out what they’re doing.”