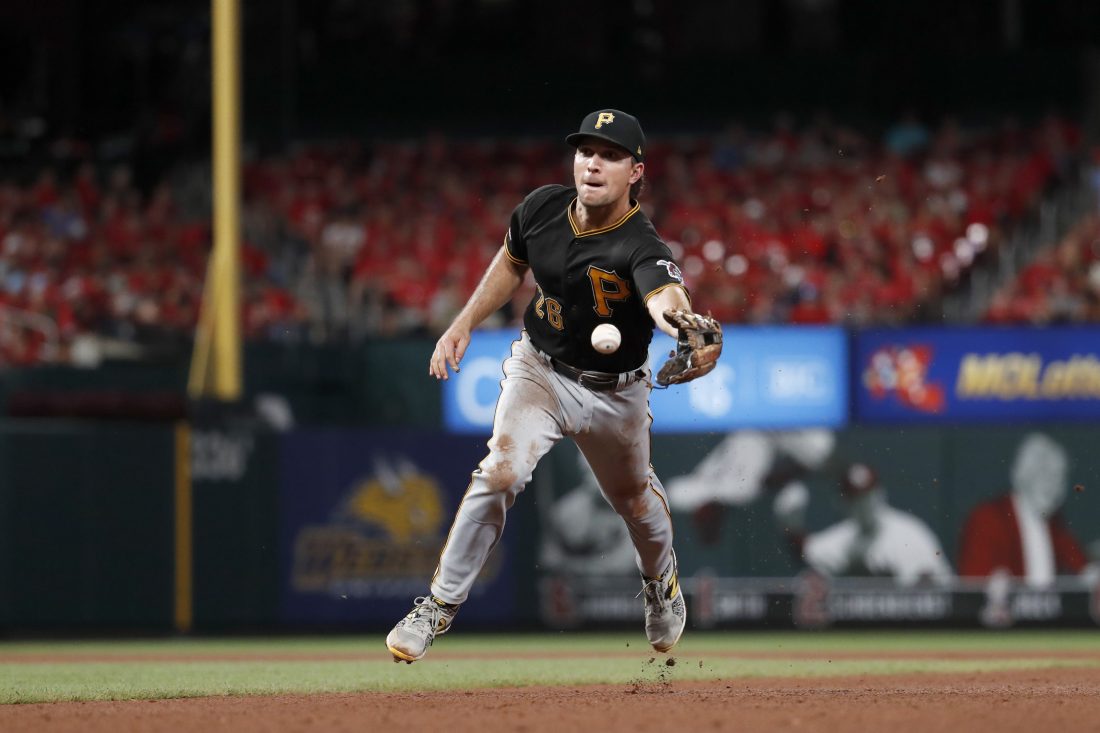 Pittsburgh Pirates second baseman Adam Frazier uses his glove to flip a ground ball by St. Louis Cardinals' Tommy Edman for an out during the fifth inning of a baseball game Tuesday, July 16, 2019, in St. Louis. (AP Photo/Jeff Roberson)

ST. LOUIS — Colin Moran drove in the go-ahead run with an infield single and the Pittsburgh Pirates scored twice in the ninth for a 3-1 victory over the St. Louis Cardinals on Tuesday night.

Francisco Liriano (4-1) pitched the eighth and earned the victory. Felipe Vazquez pitched a 1-2-3 ninth for his 21st save.

Carlos Martinez (2-1) worked one inning of relief and took the loss.

With the score tied 1-1 and one out in the top of the ninth, Starling Marte reached base when he was hit in the back with a pitch by Martinez. Josh Bell beat the shift with a single to the left side of second base, sending Marte to third. Moran hit a sharp grounder to Kolten Wong, who made a diving stop and rose to one knee, but his throw was not in time as Moran slid safely into first and Marte scored for a 2-1 lead.

Corey Dickerson walked, loading the bases. Kevin Newman hit a grounder to short, but the Cardinals failed to turn a double play, and Bell scored to give Pittsburgh a 3-1 lead.

St. Louis starter Jack Flaherty pitched seven strong innings, but did not get a decision. He allowed one run and three hits, striking out eight and walking three, including one intentional. Flaherty’s last victory came on May 14. Since then, Flaherty has three losses and seven no-decision outings.

Pittsburgh starter Dario Agrazal pitched into the seventh before he was pulled for Richard Rodriguez. Agrazal gave up a run on five hits and three walks.

Dexter Fowler led off the seventh with a double that hit the top of the fence in left. He pulled up well before second, thinking it was a home run. Marte bobbled the ball and Fowler waltzed into third. After Wong walked, Rodriguez relieved and pitched out the jam, getting a fielder’s choice, a fly out in foul territory near first base, and a ground out.

Flaherty helped himself in the fifth by driving in a run to tie it at 1-all. With one out, a short fly by Harrison Bader fell in and he hustled for a double. After Bader stole third, Flaherty doubled down the third-base line. It was his third double and third RBI this season.

Flaherty then tried to steal third. He was called safe, but Pittsburgh challenged. The call was overturned after a review.

After going hitless the first four innings, the Pirates broke through in the fifth. Corey Dickerson doubled with one out and scored on a single to right field by Kevin Newman.

THOU SHALL NOT STEAL

Cardinals catcher Matt Wieters cut down two would-be Pittsburgh stealers. In the fourth, Marte was caught trying to steal second. In the fifth, Newman attempted to steal second as Elias Diaz struck out. He was called safe but the Cardinals challenged. The call was overturned.

Cardinals: INF Matt Carpenter (right foot contusion) went on the 10-day Injured List. “You don’t want to be injured ever and to do it after just coming back from the All-Star break, feeling like your ready to have a strong second half-both individually and for the group,” Carpenter said. “It’s pretty frustrating.” St. Louis recalled rookie infielder Edmundo Sosa, 23, from Triple-A Memphis.

Cardinals: RHP Daniel Ponce de Leon (1-0, 1.99) is making his second career start against the Pirates. In his last outing, he made an emergency start for Adam Wainwright (back spasms) and held Arionza to one run on three hits while pitching 6 2/3 innings. He did not figure in the decision.

PHILADELPHIA (AP) — Bryce Harper hit a two-run double off Dodgers closer Kenley Jansen with one out in the bottom of the ninth after pinch-hitter Matt Beaty hit a three-run homer off Philadelphia closer Hector Neris in the top half, rallying the Phillies to a 9-8 win over Los Angeles on Tuesday night.

Pinch-hitter Andrew Knapp hit a double with one out in the bottom of the ninth and Cesar Hernandez singled. Scott Kingery followed with a bloop single to center that scored Knapp to get the Phillies within a run. Harper then ripped a ball to the gap that bounced off A.J. Pollock’s glove and went to the wall.

Harper hit a three-run homer and drove in five RBIs, Brad Miller and Kingery also connected for the Phillies.

Judge smashed a 3-2 pitch from left-hander Colin Poche (2-3) into the right-center field seats to make it 4-3. It was Judge’s 10th homer.

Yandy Diaz hit a solo homer and an RBI double, and Austin Meadows hit his 14th homer for Tampa Bay.

Benches cleared during the sixth inning amid a shouting match between Sabathia and hitter Avisail Garcia. After Sabathia struck out Garcia looking to strand two runners, the 38-year-old barked and pointed at Garcia. Sabathia was restrained by Gregorius and never got close to Garcia while both benches and bullpens emptied. No punches were thrown.

Gurriel had a single, double and triple, and Justin Smoak also homered for Toronto, which lost three of its previous four games.

Cashner (9-4) was acquired from the Orioles on Saturday. He failed to get an out in the sixth, allowing six runs — five earned — on eight hits and two walks, striking out two. He also gave up two homers, hit a batter and threw a wild pitch on a third strike.

Xander Bogaerts had a single, double and home run, and Mookie Betts also had three hits for Boston, which fell 10 games behind the first-place New York Yankees in the AL East.

Justin Shafer (1-1) got the win. Toronto broke it open with four runs in the ninth.

Voth (1-0) allowed one run and four hits over six innings. He walked one and hit two batters, all in an eventful but scoreless first inning.

Adams’s home run off Asher Wojciechowski (0-3) made him the 102nd player in the 28-year history of Camden Yards to hit a ball onto Eutaw Street, beyond the right field wall and in front of the B&O Warehouse.

Hanser Alberto homered for the lone run for Baltimore.

Harold Ramirez had two doubles, two RBIs and two runs scored. Garrett Cooper hit his 11th homer and a two-run single, and Starlin Castro had a bases-loaded triple to make it 11-3 in the sixth.

Jordan Yamamoto (4-0) struggled early and needed 99 pitches to get through five innings, but he gave up only two earned runs. Padres rookie Logan Allen (2-2) had his second rough start in a row, allowing seven runs in 2 1/3 innings.

Young (3-0) gave up three hits and one walk to defeat Lance Lynn (12-5), who went into the game with an 8-0 home record this season and led the majors in wins. Young struck out four and was lifted following 79 pitches.

The Diamondbacks have won five of seven.

Ketel Marte’s two-run single with the bases loaded in the fifth inning broke a 1-1 tie for Arizona. Ildemaro Vargas added a two-run home run, and the Diamondbacks scored four times in the ninth inning aided by two Rangers errors.

The Rangers have lost nine of their last 13 games.

Sparkman (3-5) walked one and had a career-high eight strikeouts in the Royals’ first complete-game shutout since June 2, 2017, when Jason Vargas beat Cleveland 4-0.

Kansas City improved to 4-1 since the All-Star break and dropped the White Sox to 0-5.

Merrifield raced to an inside-the-park homer down the right-field line in the fourth inning after Cam Gallagher doubled.

Dozier hit a two-run, 447-foot homer to left field in the eighth inning to cap a four-run inning and finish the scoring.

Chicago starter Dylan Cease (1-1) gave up six runs — four earned — and eight hits in six innings. He walked one and struck out seven.

MINNEAPOLIS (AP) — Michael Conforto went 4 for 4 and drove in the go-ahead run with a two-out single in the fifth inning, helping New York over Minnesota.

Conforto even made the defensive play of the game, a graceful leaping grab at the top of the wall in left-center to end the third with a runner on and take away a potential homer from Nelson Cruz.

Jonathan Schoop homered for the Twins.

Luis Avilan (2-0) picked up the victory. Edwin Diaz survived a tense ninth for his 21st save in 25 attempts.

Michael Pineda (6-5) allowed one earned run for the fifth time in his last six starts. Pineda finished six innings for the third straight turn, allowing six hits without a walk.

Nicholas Castellanos accounted for the Tigers’ only hit with a leadoff single up the middle in the fifth inning off Tyler Clippard. Detroit had two baserunners and sent 28 batters to the plate — one above the minimum.

Goody (1-0) retired six straight batters in the sixth and seventh to earn his first victory since June 17, 2017.

Mercado hit a two-run shot and Francisco Lindor added a two-run double in a five-run second inning, as Cleveland bolted to a 7-0 lead through three.

CHICAGO (AP) — Kyle Schwarber hit a solo home run with one out in the bottom of the 10th inning to rally Chicago past Cincinnati.

Schwarber stroked a 1-1 pitch from closer Raisel Iglesias (2-8) into the basket in front of the left field bleachers for his 21st homer.

Robel Garcia and Kris Bryant also connected for the NL Central leaders, who have won six of eight.

Eugenio Suarez homered for Cincinnati, which fell to 7-4 against Chicago this season.

Brandon Woodruff (11-3) gave up one run and five hits in 6 2/3 innings for the Brewers, who had lost eight of their previous 10 games. He walked one and struck out seven.

Mike Moustakas picked up his 1,000th career hit with a single to right-center field in the seventh.

Bryse Wilson (1-1) allowed four runs and six hits in four innings for the Braves. He became the youngest pitcher to start a game in the National League this season at 21 years, 208 days.

Tyler Flowers scored the lone run for the Braves on a solo homer in the fifth.

Mike Yastrzemski homered and doubled among his three hits and had three RBIs for the Giants, who have won seven of eight, including four in a row.

Trevor Story and Ian Desmond homered for the Rockies, who have lost 10 of 12.